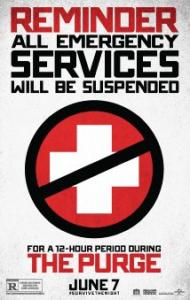 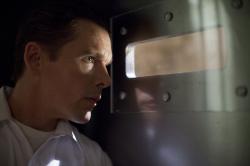 Ethan Hawke in The Purge.

Science Fiction is quite often used to hold a mirror up to society by showing an alien or future plot device as a metaphor for conditions in the modern world. Many classic short stories from the Golden Age of Sci-Fi worked that way, such as The Lottery by Shirley Jackson, as well as the original series of Star Trek in episodes like The Return of the Archons, which features a plot element not dissimilar to the one in this film. However, whatever point this film wants to make takes a back seat to some schlocky action scenes and turns into a fairly standard home invasion movie.

The gimmick behind the plot is that in the near future America has been revitalized economically by one simple change in law. Once a year, for one night, all crime is legal. This event, known as the Purge, brings out the murderer that writer/director James DeMonaco seems to think exists in all Americans. It is meant to be a time for all violent urges to be vented and as written, the haves kill off the have nots, removing the useless members of society. The fact that this is completely implausible and probably the exact opposite of what would really happen should such a law take effect, never enters into the story. It would be far more likely that the have nots would take advantage of the absence of law to try and become the haves. When you look back at history, how many times have you read about a riot made up of the rich, rampaging through the ghettos or tenements of the poor? James DeMonaco is from Staten Island. Is he unfamiliar with what happened during the great NYC blackout of 1977? It wasn't the Park Avenue rich who went on a crime spree that night.

In the year 2022, when this movie takes place, the Purge has been going on for several years. Ethan Hawke plays James Sandin, a security salesman living in an upscale neighborhood. When the Purge begins, he seals off his house as usual, but things go awry when his son drops their home's defenses to allow a homeless man in who is being chased by a mob of rich young youths. The mob comes seeking their escaped prey and they don't mind killing Sandin and his family if that's what it takes.

Clearly writer/director James DeMonaco has a dim view of his native country. Apparently he believes that the only thing keeping most of us from becoming murderers is the law forbidding it. It is also telling that he has given the name, "The New Founding Fathers", to those who brought about the Purge, about which he as said in an interview that, "I layered in these New Founding Fathers, this regime that we voted into power at some point, some kind of NRA-thing that took over the country." His social commentary would carry more weight if he didn't constantly use violence in this film as entertainment. It wants to condemn violence in our society while getting you to cheer on violence all at the same time. His points are also hurt by the fact that the gimmick just doesn't make much sense.

As an action movie, this one has the occasional moment. The villains, while providing a few scares, unfortunately don't really ring true. They wear masks for the most part, which makes them creepier, but which seems to go against the idea of The Purge, which is that anyone can commit a crime so hiding your identity would be unnecessary. They also come across as either totally insane or deeply on drugs of some kind. Also, since this is their big night of the year, it does seem strange that they would waste it on one house.

It might be possible to make a valid social point with this plot device, but DeMonaco never manages to effectively make one. Instead we end up with a mediocre home invasion film with a vague attempt of accusing all Americans of being closet murderers. 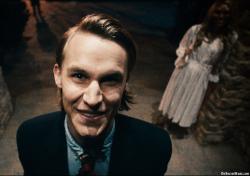 The preppy from hell.

Although The Purge does not state which political party is in power, it is obvious that DeMonaco is intending it to be a right wing type government. All of the references to God, guns and patriotism make it all too clear where DeMonaco is laying the blame for the purge. The repeated phrase of “Our new Founding Fathers” is very much a Tea Party slam as they pride themselves on the writings of the original Founding Fathers.

As Scott pointed out, DeMonaco’s idea that the rich, who have the most to lose, would risk their lives to kill some members of the 47% is ridiculous. The wealthy are not threatened by them. The middle class, who work for everything they own, are the ones bothered by the 47% of this country getting tax payer funded government assistance for doing absolutely nothing.

However, it is not the conservatives of this country who would support a purge of this type, but the liberals. In fact, one such purge, sponsored by liberals/democrats, has been going on for decades in this country with the financing of Planned Parenthood, which only exists because they perform abortions. All other services of theirs can be found anywhere else. The Liberals mantra of “right to choose” is merely a get out of jail free card for murdering.

This movie uses the purge as a means to reduce the population of takers and unwanted citizens. There have been papers written that suggest one such reason our government supports legalized abortion is that it reduces the crime rate as most abortions are performed on poor young girls who would give birth to children with a greater chance of becoming criminals. Papers written on the subject claim that crime rates have dropped because of the government sponsored baby killings. I am sure you could look up all kinds of articles that disagree with that but tell me this, why does the government want to use tax payers money to finance the offing of an innocent unborn child?

A more recent example is the death panels in Obamacare. Sure, the title “Death Panels” was created by the right to scare us, but there is something to it. Under Obamacare, your doctor cannot provide every service you need without government approval. I have already spent far too much time dealing with privately owned insurance companies to believe our government will not deny many procedures. “I am sorry Mr. Nash, but at the age 74 it is not fiscally responsible for the government to spend $20,000 on your surgery, but we will pay 50% of your pain medication.”

The idea of a government sponsored purge is very believable, just look at Nazi Germany purging itself of Jews or Muslim countries purging themselves of Christians. It happens today and has happened throughout history. The government of the United States purged itself of the American Indians. You are being naive if you think it could never happen again.

The most interesting thing about this film for me is the political discussion it brings up. The main characters run around their home with no goal in mind. Whenever something happens, the family members all scatter in different directions. At one point the husband tells his wife to guard the back door while he will guard the front. Neither do it. Later, the husband gets into a huge fight with two members of the gang breaking in. He kills them both with multiple gun shots. This house is decent sized but his wife never hears any of the gun fire? Nothing about this films plot makes much sense other than the idea that a purge is possible. We will just have to be smart enough to know it when we see it. 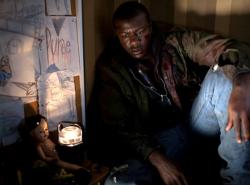 Edwin Hodge plays a Bloody Stranger in The Purge.

I never bought into this movie as either political/social commentary or as a thriller. The entire concept of the Purge shows little common sense or understanding of human nature. Anarchy reigns at the sounding of an alarm and 12 hours later it ends just as suddenly with the sounding of another alarm. Just like magic. I don't for one second believe this is how humans would actually behave. History has shown just how difficult it is to quell a riot in one neighborhood in a large city. Can you imagine the amount of police presence it would take to control a nationwide crime wave of this magnitude?

As a thriller The Purge sucks. Eric pointed out the ridiculous set up once the purgers enter the Sandin house. How big is this house anyway? Purgers are shown running rampant through it smashing pictures on walls, then a second later the mother is all alone walking slowly through an empty -and completely quiet- house. The logistics don't add up. And why do the Sandin's wait for the purgers to enter their house before opening fire in the first place?

The cast plays it entirely straight without any sense of winking at the audience. I could have bought into the story as a satire but James DeMonaco shows no signs that it was intended as one.

I disagree with Eric (what a surprise) about the likelihood of a purge happening in real life. The only way a purge like the one depicted in this movie could happen in this country is if the government breaks down completely. Both examples he cited, Nazi Germany's pogrom against Jews, and the United States' genocide of Native Americans, were carried out by government forces and not rampaging citizenry. I think Scott was much closer to the truth. By far the majority of all crimes are based on economic need. In real life during a 12 hour period where all crime is legal, the poor and disenfranchised would rise up and take as much as they could from the wealthy. Since the wealthy have all the power and nothing to gain from this, why would they ever let it happen?

Now I do believe that under certain extreme circumstances there is a killer lurking inside each of us. For example, during a real life purge there would most likely be a rash of revenge killings. People that had a grudge against another person would take this opportunity to get even. Bosses would be a prime target. But the idea that if the government legalized murder for 12 hours once a year the wealthy would murder the poor, thus keeping the population down and allowing the economy to flourish is both simplistic and utterly ridiculous. Unfortunately this cinematic rubbish earned enough money to garner a sequel. Lock your doors and bar your windows, The Purge: Anarchy hits theaters this summer (2014).