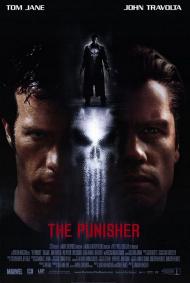 Tom Jane in The Punisher.

The Punisher is another attempt at launching a Marvel superhero movie series. After the success of X-menand Spiderman who can blame them for trying? But I wouldn't advise holding your breath for a sequel.

The plot is as tired a cliché is there can possibly be. A man's family gets murdered so he exacts a whole lot of violent revenge. Throw in a black tie shirt with a skull on it and you have the entire movie. No really, that is it.

The whole "vigilante revenge for ones family being killed" plot has been done to death. Clint Eastwood played this part in The Outlaw Josey Wales. Charles Bronson played it in Death Wish. For that matter even Raquel Welch played it in Hannie Caulder. Only they didn't have the cool t-shirt.

Thomas Jane is adequately muscular and stoned faced for the role. He resembles Christopher Lambert in Highlander. Basically, Jane smiles for the first 10 minutes of the movie and then scowls for the rest. John Travolta, as the bad guy, continues to baffle me as to why he is so well regarded as an actor.

The Punisher's only gimmick is a black t-shirt with a skull on it. Frank Castle is a sadistic killer. The moment he tells Travolta that he just killed his other son is particularly cold. However, in one scene he is extracting information from a hood by poking him with a Popsicle. The hood thinks it is a blowtorch. But still, a Popsicle?