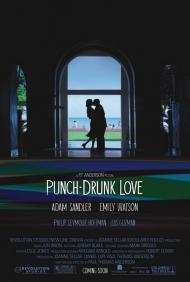 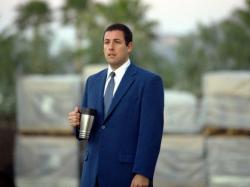 Punch Drunk Love stars Adam Sandler.  Admit it, just by my saying that, you immediately got an idea of what this movie is about and the kind of humor it must have.  Well, if you were thinking that this movie is his typical juvenile humor, you could not be more wrong.  Adam Sandler stars in this movie, but this is not an Adam Sandler movie.  It is also not the light hearted romantic comedy that the advertisements would have you believe.

What this movie is, is a dark comedy about a very disturbed and lonely man (Sandler) who owns a bathroom novelty company, who gets into trouble with some thugs who run a Phone Sex Company, and falls in love with a friend of his sisters at the same time.  Providing comedy and incredible tension, both at the same time.

Under the direction of Paul Thomas Anderson, the director of Boogie Nights, and Magnolia, Adam Sandler actually acts and acts damn well.  His character of Barry Egan is mentally unbalanced and sympathetic at the same time.  He is repressed by his domineering seven sisters and seems to be the victim of his own life.  In desperation for company, he calls a sex phone line.  The girl he speaks to, begins to call him back regularly demanding money from him, and even sends people around to his house to collect the money he refuses to give.

In the meantime, one of his sisters introduces him to a woman (Emily Watson) she works with, and unlikely the two hit it off.  Barry, who, through a marketing loop-hole, has discovered that a Healthy Choice food promotion will allow him to get unlimited frequent flier miles by buying several thousand pudding cups.  He dreams of cashing them all in and being able to fly wherever he wants to, so that he can accompany Emily Watson's character whenever she has to travel for work.

What really makes this movie so special, apart from the revelation that Adam Sandler can act, is the direction.  Paul Thomas Anderson directs this movie with a frantic style and an incredible use of sudden sound bursts.  These sound bursts, such as the quiet street at the beginning that is suddenly broken by a crashing car, come at you infrequently but regularly enough so that it builds a tension while you wait for the next one.  He also uses movements of the camera effectively.  Normally I don't care for gimmicky direction, but in this case it doesn't distract from the movie, but enhances it, so much so that even when the movie isn't great at times, it is always interesting.

I won't tell you how this movie ends, but I will say that for the first time in a very long time, I had no idea where a movie was headed.  In this time of predictable Hollywood movies, this was a revelation.

Back to the preconceived ideas of Adam Sandler, I have to say that at several times during the movie, the audience in the theater with me was laughing at inopportune times.  At one point, his character confesses to his brother-in-law that he wants to see a psychiatrist.  He then goes on to say that he doesn't like himself very much and that he just starts crying sometimes and can't stop, and in fact, breaks in to tears during the scene.  Now because it was Adam Sandler, and I think the crowd was expecting a traditional Sandler movie, they started laughing.

Therefore, the question is, how will this movie handle this?  Sandler's regular fans are not going to get what they expect from this movie, and can non-Sandler fans accept him as an actor?  They should, because he is amazing in this movie, but will they? 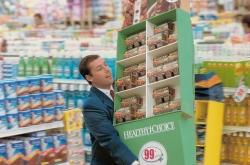 Scott had no idea where this movie was headed? The end of this film was more obvious than a sports movie. Sandler plays an insecure, socially retarded introvert. He falls in love and gains some confidence. Color me surprised.

So, Sandler does some decent, not great, acting. The crying scene Scott goes on about is pathetic. Sandler cries into his hands so at no point do you actually see him cry. You just hear him make sobbing noises.

I enjoyed watching him kick the thug's ass. It was the only real enjoyable moment in the movie. The rest of the time, I just wondered how someone stupid enough to give his credit card and social security number out to a complete stranger could actually run his own business.

The direction is imaginative. When Watson and Sandler are reunited in Hawaii, they walk slowly toward each other. No one is around. The second they hug, countless people are all of a sudden walking past them.

Some creative direction is not enough to get me to care about Barry. He needs therapy. The movie needs more dialogue. Watson's character needs a motivation. Why the hell she falls for this moron is never explained. 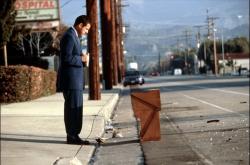 This movie's charms were lost on Eric, but like Scott, I thoroughly enjoyed it. Adam Sandler is a revelation as the high functioning neurotic Barry Egan, prone to fits of violence. Unlike his typical silly movie caricature he really gets inside this guy's skin and makes him real. As for Emily Watson as Lena, I understood her attraction to Barry. She sees the sweet and lonely person hiding inside him. And she's a bit of an odd duck herself. Before she actually meets Barry she follows him around a store and orchestrates their “chance” encounter.

I also agree about the direction. It is arty but in a way that enhances the story and suits these oddball characters. I loved the score by Jon Brion using the harmonium, an instrument that plays a bit part in the story (see photo). At first I wasn't sure if Barry being stalked by the phone sex operator was real or just a manifestation of his disturbed mind. Sure he could benefit from therapy but mentally ill people need love to. The inclusion of the Harry Nilsson penned song “He Needs Me” from Popeye adds just the right whimsical quirkiness to Barry's and Lena's courtship.

There are several very funny scenes. One when Barry attempts to run away from the four blonde thugs when they confront him on a deserted street one night. He races like hell down an alley only to be forced to retrace his steps. He is hysterical the entire time. Finally he makes it back to the main road and begins running down it as fast as he possibly can, only to have the four blonde thugs drive up alongside him immediately and say, “Where are you going? We know where you live.” Sandler makes the situation funny while keeping it solidly within the realm of reality.

The other scene that cracked me up was when he excuses himself from the table when he's having dinner at a restaurant with Lena. In an unexplained fit of rage he destroys the bathroom. When the headwaiter confronts him about it he denies doing it, even though he is the only possible suspect and his hand is bleeding profusely. His denial of the obvious is darkly hilarious.

I can understand why this movie isn't everyone's cup of tea, so to speak. Barry is not only a departure for Adam Sandler, he's also an unusual movie protagonist. When Barry and Lena make love they exchange the following bit of sex talk... Barry, “I'm lookin' at your face and I just wanna smash it. I just wanna fuckin' smash it with a sledgehammer and squeeze it. You're so pretty.” Lena, “I want to chew your face, and I want to scoop out your eyes and I want to eat them and chew them and suck on them.” It's not your typical pillow talk but it has a raw honesty to it that I found refreshing.

At heart Punch-Drunk Love is really just another romantic comedy. It ends on a very happy Hollywood note that anyone who's familiar with his work knows is a very rare occurrence in a Paul Thomas Anderson film. Another plus is the run time. Unlike his other overlong movies this one clocks in at just an hour and a half. Punch-Drunk Love is easily his most accessible movie and Adam Sandler's finest screen performance.