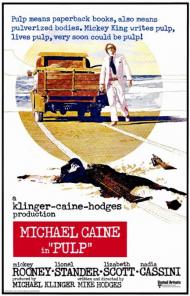 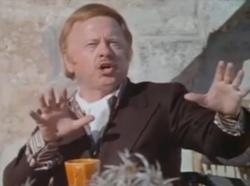 Pulp was writer/director Mike Hodges followup to his 1971 hit Get Carter. Like that movie it stars Michael Caine. He plays Mickey King a writer of sexually laced, cheap detective fiction. As he explains it in voice-over, “I am famous for such books as "My Gun is Long". I have many aliases. I am authors Susan Eager and Paul S. Coming. I am those and others. I am Paul Strong, Gary Rough and Les B. Han.”

King lives in Rome but most of the movie takes place on Malta (where it was shot on location). When Mickey is hired to ghostwrite the autobiography of a mysterious celebrity, people begin to die. In the style of movies like Charade, Pulp attempts to combine suspense with laughs but it's only partially successful. It does feature a colorful cast of characters but it isn't as funny or as suspenseful as it could have been.

The mystery celebrity turns out to be Preston Gilbert, a has been Hollywood star with mob ties, played by none other than Mickey Rooney. Rooney steals his few scenes but unfortunately he's only in the movie for about twenty minutes. Being the consummate ham (I mean actor) that he was, he gives his all and really relishes every second he spends in front of the cameras. At one point he says to King, “I figured I had already paid my debt to society. I was killed in over 80 movies, wasn't I?” He's particularly funny when talking about his ancient Italian mother. She speaks no English and doesn't seem to move very much.

The director includes several homages to other films. One funny bit has an actor who looks like Humphrey Bogart approach a short man who looks a bit like Peter Lorre and ask him what kind of bird is on a nearby perch. “A Maltese falcon.” Comes the reply. In another scene a bunch of priests are included in a police lineup and Michael Caine quips, “What is this, an audition for Boys Town?” Which of course starred Mickey Rooney. This movie also marked the final screen appearance by 1940's film noir femme fatale extraordinaire Lizabeth Scott, playing a man hungry princess.

The mystery aspect of the movie isn't all that mysterious and the humor is hit or miss too. On the positive side, the climax on a beach is fairly well staged, Michael Caine gives his usual professional performance, and Rooney's a delight as the aging Hollywood gangster. Pulp is worth a look, although it falls short of its potential.

Mickey Rooney was only 13 years older than Michael Caine, but because he became famous while still so young, the age difference seems much more pronounced than it actually was. Writer/Director Hodges hired Rooney over the studio's objections, insisting that "Rooney combined the diminutive stature and high energy of James Cagney with the calculated cunning of George Raft". Caine was quite happy with the chance to collaborate with Rooney, writing in his autobiography that "I remember how he used to tell me the filthiest jokes with every four-letter word imaginable. At the end of the joke he would clasp both my hands, a pious look would come over his face and he would say, 'God bless you, my son,' with complete sincerity." Like Patrick I found Rooney's inclusion to be the real highlight of this otherwise uneven film.

Not that Michael Caine is completely outshone. He is quite good as the laconic and cowardly writer. His voiceover narration is often amusing, especially when he narrates one thing, but is shown doing something completely different, such as when near the film's climax he is shot in the leg. In the voiceover he calmly describes how he rips off his shirt to bind the wound, while in reality, one sight of his own blood is enough to cause him to faint. His pseudonyms are also worth a laugh. Patrick mentioned several of them, but left off "S. Odomy". The effect his writing has on the female typists who transcribe his dictated novels is also worth a laugh. His foppish character here is the polar opposite of the one from Get Carter.

The movie really works best in its quirkier moments. It starts quite lightheartedly with a comical sequence involving several car accidents and a bumbling person trying to follow Mickey King. Later, when it tries to have a few moments of genuine tension, the balance is never quite right and they fall flat. The direction and the pacing feel quite heavy and so likewise, the humor is never as funny as it should be. The tension and mystery aren't helped by the fact that the real villain of the story isn't hard to spot since he's the one character introduced and referenced in the background several times right from the start for seemingly no purpose at the time so that you know he will play an important part later.

Patrick mentioned the location shooting, which is the other thing that makes this attempt at neo-noir unique. Instead of the typical big city setting, this one is set in sunny Italy. Apart from a few scenes along the coast however, it doesn't show Malta off to good advantage, making most of it look barren and desolate. Caine wasn't happy about the location either. When a reporter asked him if there was anything in Malta that a visitor shouldn't miss, he replied, "Yeah, the plane home."

I was intrigued enough to watch this movie by the combination of Caine and Rooney. Their pairing was enough of a curiosity to prompt me to watch it and really that's the only reason to do so. Together they make this odd duck of a movie watchable. They're not enough to make it great, but they do manage to keep it from being boring. 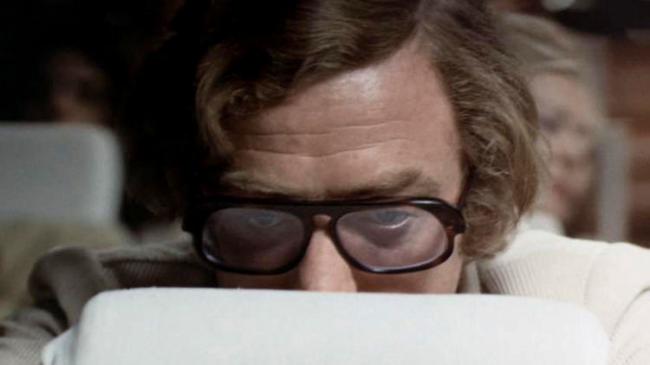 Michael Caine and Mickey Rooney in the same film is an interesting idea. However, Pulp is not a great vehicle for either one. I would argue that both were miscast. Caine is much better in action films such as Zulu and Get Carter. The role of Mickey should have been played by a comic nerd who dreams of being a hero like the ones he writes about. Preston should have been played by a more threatening actor. All that Rooney can muster is annoying. Perhaps they should have played each other’s roles?

Pulp is a comedy, plain and simple. Patrick mentioned some of the names of Mickey’s books and his pseudonyms. Scott wrote of the slapstick car crashes. There are many lines intended to be funny. When Preston’s, “long legged whore” passionately kisses Mickey in the Roman temple he narrates, “I had visions of refueling in space.” When trying to get away in the truck, an injured man has to show Mickey how to turn the key in the ignition. Mickey says to him with all seriousness, “Thank God you’re mechanically inclined.”

The intrigue of Pulp is that Mickey, who writes trashy pulp fiction, finds himself living in one of his own types of stories. Nothing in this film is ever to be taken seriously. The problem is that not all of the humor works and we are left wondering at times what the film makers were thinking. There are plenty of little jokes and subtle things going on but the levity never finds a consistent rhythm.

None of these people, including Michael Caine in the lead, are all that likable. I never cared if he solved the mystery or even survived to write about it. Mickey Rooney is playing a horribly obnoxious character whose death could not come soon enough. He is loud, crass and completely detestable. I know, he is intended to be that way but you would think that some of his charm would shine through but it never does.

Having lived on a Mediterranean island, I was anxious to see the location shots. However, as Scott noted, they never took real advantage of the setting. This movie makes that part of the world seem like a very bleak colorless place. I wonder what time of year this was filmed as the trees look more gray than green. This movie had some good ideas but the execution of it all was way off. 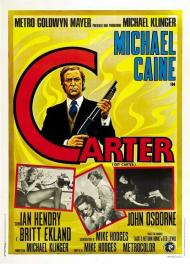