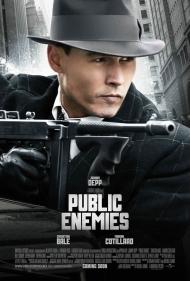 Public Enemies should have been much better than it actually is. Johnny Depp and Christian Bale are both good actors and Depp is playing an iconic character. It's too bad then that the movie meanders, features a dull love story, and tries to make both the lawman and the outlaw the good guy to the detriment of both.

Depp plays John Dillinger, the famous bank robber of the 1930s and the FBI's Public Enemy number one. Bale is Melvin Purvis, the FBI agent in charge of bringing Dillinger to justice. The movie covers the latter portion of Dillinger's career and eventual downfall, including the infamous lady in red (although here she wears orange for some reason) who fingered Dillinger outside the Biograph theater in Chicago where he had just watched Clark Gable in Manhattan Melodrama. Just a brief research of Dillinger on the web shows that while this movie gets things right in general, it doesn't hesitate to change some of the details to suit the story.

Anyone who reads my reviews must know by now that one of my regular complaints is movies that run too long and this is one of those movies. There are some exciting action scenes, but when Dillinger isn't robbing a bank or battling with the FBI and the police, I was bored. In fact, I can narrow it down more than that. Every scene with Marion Cotillard bored me, but that's not a slam on her. She's a very talented and beautiful actress. I just never bought the love story angle. Why Dillinger thinks she's more than a bit of crumpet is never explained. This is one of those love stories where we're told the two characters love each other, but are never shown why. All the love story does is slow the movie down. The shot of Dillinger crying in his car after Billie is captured by the FBI doesn't ring true at all. And the final lines in the movie taken from the song "Bye-Bye Blackbird" are vomit inducing.

I also dislike the way they try to portray Dillinger as a hero. "Keep your money," he says to a farmer inside a bank he's robbing. "We want the bank's money, not yours." Well, whose money does he think is in the bank? He was no Robin Hood. It's not like he robbed the banks and then took the money around to farmers who had lost their farms in the depression. He robbed the banks, often times killing people in the process, and then spent the money on whores and alcohol and the finer things in life.

In fact, it is the FBI who are shown to be the villains. Bale's Purvis is shown to be honorable, but J. Edgar Hoover is portrayed as a phoney who will use any means to advance himself and the Bureau. Other agents are shown as sadistic torturers who don't object to depriving criminals of medical attention or slapping around a woman prisoner.

The best parts of the movie are when it's not taking itself seriously. I can buy Dillinger as a charming villain (not a charming hero). There are a few lighter moments and the action is quite good, although I could have used a few less hand-held camera moves. In fact, I think every director out there should be forbidden to film an action scene with a hand-held camera for a year. It's become the de-facto manner in which all action scenes are filmed, and I'm getting quite tired of it. Just once these days I'd like to be able to really see all of the action, instead of just herky jerky movements that leave the audience a little sick to their stomachs.

There are definitely some things to enjoy about this movie, but it could have used a further edit to shorten its running time and to remove some of the melodrama. 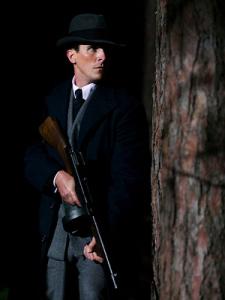 Dillinger captured the imagination of a depression weary nation. He robbed banks, at a time when banks were repossessing homes and farms. He was not a good guy, but many people at the time probably enjoyed reading about him robbing banks, that they viewed as greedy.

Dillinger in return enjoyed his celebrity. The extras on the DVD show an actual clip of the real Dillinger being arrested. He was very casual and glib with the reporters. He even leans up against someone, with his elbow casually resting on their shoulder as he smirks at the cameras. The scene is duplicated in the movie.

That one clip alone, shows the weakness of this film. Dillinger was a celebrity who liked the attention. He was cocky. He liked nice things. He spent money on the ladies, and enjoyed getting laid. He hung out with prostitutes and had gonorrhea. He robbed banks and police stations. He killed people. John Dillinger lived a wild and crazy life.

With such a great character to make a movie about, I thought this movie could not fail, but I was wrong. Depp portrays Dillinger as a love lorn sad sack. As Scott wrote, it attempts to make you sympathize with him, but it fails. The reason is that it does not explain his motive, which is simply that he liked being a gangster. He enjoyed it too much, and the public attention only served to egg him on. Depp should have played him as more boisterous. Dillinger was a self serving detriment to society, who loved his own fame. Depp's portrayal of him is pretty damn boring.

I was likewise excited to see this movie because of the famous cast. I was curious how such actors only known for fluff roles, like Crudup and Tatum, would stand up against Depp and Bale. I always thought Ribisi has been underestimated as an actor. I was again disappointed. Other than Bale, everyone else has such a small role that they may as well have been played by a nobody. Through the scenes shown from Manhattan Melodrama, Clark Gable has as much screen time as Crudup and more lines than Ribisi. As for Tatum, to call his role a cameo is giving it too much credit. I could not even tell it was really him.

The only thing Public Enemies succeeded at was that it sparked my interest in Dillinger. Like Scott, I looked him up afterwards. Did you know he was married at a very young age, before getting a divorce? His Wiki page is more informative than this movie. 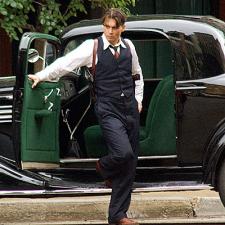 Where is the cocky charm of John Dillinger?

I agree. Depp gets Dillinger all wrong. Where is the cocky charming villain Dillinger appears to be in the actual newsreel footage? Instead (to quote Eric and Scott) Depp and Mann show him as a “lovelorn sad sack” trying to be a “charming hero”. I also agree with you Scott about the hand held camera technique. It is extremely annoying here and doesn’t go at all with the old-fashioned almost nourish style of the rest of the movie.

There are a few decent action sequences. I enjoyed the scene where Purvis hunts down Baby-Face Nelson (or was it Pretty Boy Floyd?). Christian Bale is a good actor but I have never been a fan of his. He is just one of those actors that I – for some irrational reason – don’t like. He manages to make Purvis a believable human being. He is driven in his work but also a flawed man with his own inner demons.

By showing the clips from Manhattan Melodrama this movie only proves the lack of charisma Johnny Depp has when compared to Clark Gable. Now HE knew how to play a cocky gangster. In fact I would much rather watch that movie again or Jimmy Cagney’s The Public Enemy for the 20th time than ever watch this uneven mess again.