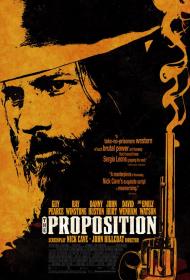 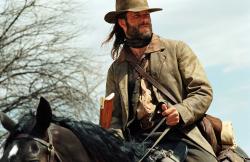 Guy Pearce in The Proposition.

Americans often think of "cowboy" films as being exclusive to the United States. However, Australia has made it's share of gun slinging, horse riding movies. Other than the accents, they are quite similar to those made in The States. However, with the except of The Man From Snowy River, which is as much a love story as it is a "western", I have yet to see a truly great Australian action/western movie.

The Proposition opens with a promising scene. Some bad guys and their Asian hookers are in a shack being shot at by the law. The movie then jumps to after the shootout is over. The hookers are dead and the outlaws are captured. The Captain makes a proposition to one of the outlaws, Charlie. Captain Stanley offers to pardon Charlie and his brother Mike if Charlie will go, find and kill his older brother Arthur in 9 days. Mike will stay in the Captain's custody, jail, while Charlie hunts for his brother Arthur.

The movie then plays out with two storylines. One has Charlie heading into the outback and the other is The Captain dealing with his decision to let Charlie go. Pearce is a great actor but their is very little for him to do but stare at sunsets and ride his horse. He comes across a bounty hunter looking for his brother, and he gets attacked by some aborigines. He eventually finds his brother and must decide if he can live with his decision to either kill his older brother or let his younger brother be hanged. It is definitely the weaker of the two plots.

Stanley is likewise faced with dealing with the pressures of his decision to make a deal with a criminal. Once his proposition comes out to the public, people become bitter and angry about it, including his wife. Winstone is amazing in this role. He is a walking pile of stress. Stanley is a man barely holding it together. He carries Stanley in such a way that you can almost feel his nerves about to break.

Whereas the acting is top notch, the direction and editing are flawed. First and foremost, this movie features numerous scenes of characters staring into the sunset. Once is enough to show symbolism. Half a dozen times in just plain monotonous. The staple to all westerns are the action scenes. Hillcoat's direction, during the action scenes, is jarring at best. They happen suddenly and are over far two quickly. The Proposition works well as a drama, but leaves much to be desired in the action arena.