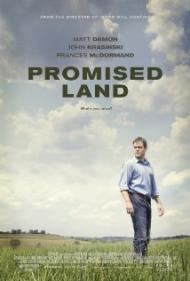 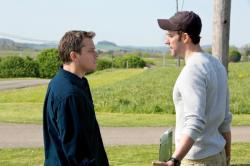 Promised Land is packaged and sold as a pro small town America film. We are shown the American flag, and plenty of small town pride. We have greedy white American businessmen trying to manipulate the good folks of this hard working farming community. The setup is far too simple and far too hypocritical. Knowing how liberal Hollywood is, you know how this film will end before it even starts.

Matt Damon plays Steve Butler, who works for a natural gas company. He and his partner Sue, played by Frances McDormand, are assigned to visit a small town and buy the drilling rights from the citizens. Like so many small towns who have seen their economy decline recently, the salesmen assume the local citizens will be an easy sell. They basically go door to door telling the home owners that if they accept their company's offer for drilling rights on their property they will make a very nice profit. Steve even tells one man it could be millions.

It starts out easy enough as these lower middle class folks seem quite eager to take the money and run. Then an old schoolteacher starts to ask questions and objects to the sales. He acts like he speaks for everyone. Then an environmentalist, Dustin, shows up to make things even harder on Steve and Sue. He goes on a campaign throughout the town preaching about the environmental and health hazards of fracking. In case you do not know, fracking is a way of extracting natural gas from shale rock found deep in the ground, by forcing water and chemicals into the ground that splinters the rock, releasing the gas. The problem being that those chemicals have the potential to contaminate the local water supply.

The point of this film is as plain as day, fracking is bad while corporate America is greedy and uncaring. I am not going to defend fracking by any means, but this film is so bent on a point of view that the plot is more of a lecture than an entertaining film experience. The film ends with the town voting on whether or not to allow the drilling to happen. Damon defended that scene to thewrap.com by saying, “It’s not about what you decide, it’s that you make the decision.” As nice a statement as that is, to make an honest decision we have to hear both sides of the story. Many in the energy industry have stated that this film exaggerates the potential hazards. This film ignores that charge as it makes a clear effort to lead the audience down its chosen path.

John Krasinski and Matt Damon wrote this screenplay atop of a high horse. These two east coast liberals wanted to show the dangers of fracking and represent small town America as a place of pride. That is nice and all but what do two rich celebrities know of a struggling farmer? The film features one guy, played by Lucas Black, who starts spending money as soon as he can, but he is treated as an anomaly and not the general consensus. Do these pampered Hollywood idiots think all of these people chose to live in these farming communities because they wanted to? Some did, but most were just born to it. I believe a lot more people than this film shows would have taken the money and ran. We are shown that the suits are all money grubbers, but Krasinski and Damon shy away from showing these middle class folks in the same light, even though they need the money even more.

Although this film has a little twist near the end, the real punchline is in discovering who put up the money for this film to be produced? It came from none other than the oil exporting group of countries called The United Arab Emirates. That is correct. Damon and Krasinski wrote an anti-fracking/pro fossil fuel burning film. It may not have been their intention, but those Arab money men sure saw the film's message as clear as day. This would be like Nestle financing a film that suggested Hershey's chocolate gave you cancer. Matt Damon has made public announcements warning of manmade global warming, yet here he made a film financed from selling the environment's, supposedly, worst enemy, fossil fuels. Hypocrite, thy name is Matt Damon.