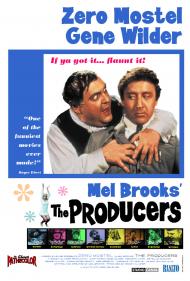 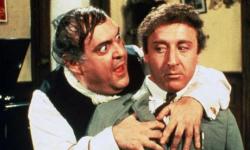 Mel Brooks struck gold his first time out as writer/director in this hilarious story of fifth-rate Broadway producer Max Bialystock and nebbishy accountant Leo Bloom and their scheme to create a sure fire flop in order to bilk investors of a million dollars. Zero Mostel and Gene Wilder are perfectly cast and together create some of the funniest moments in movies. From the opening visit to 'Little Old Lady Land' - "You'll be the chauffer and I'm the Contessa" all the way through to the final scene in prison The Producers is nearly flawless. My brothers and I play a game where we randomly quote lines from movies and this has long been one of our favorites. "White, white, white is the color of our carpet." and "We're not alone."

The plot is original and well paced, the story witty and touching and the characters unforgettable. Without beating a dead horse I think this is one of the ten funniest movies ever made. "I'm not a madam I'm a concierge."

The supporting cast includes Dick Shawn as LSD the beatnik actor chosen to portray Hitler. Kenneth Mars is hilarious as De Fuehrer worshipping author of 'Springtime for Hitler'. In the late sixties and early seventies he was the funniest character actor in Hollywood creating memorable  roles in such comedy classics as What's Up Doc and Young Frankenstein. Renee Taylor of The Nanny fame gets laughs in a brief scene as Eva Braun in the play within a movie.

I am always amazed at how much seeing a movie on the big screen can add to my enjoyment of it. Even though I have seen The Producers half a dozen times on television and video in some ways this was like watching a new movie, especially during the montage of shots of Max and Leo around Manhattan and in the creative way Mel Brooks uses close-ups to add to the humor. Woody Allen may be wittier but Brooks is much more a master of camera technique.

I am pleased that the success of the Broadway musical has brought a renewed interest in this timeless and truly funny movie.

Mel Brooks comedic trilogy started with The Producers. The other two in the trilogy being Young Frankenstein and Blazing Saddles. Gene Wilder is in all three of these movies but only stars in two; The Producers and Young Frankenstein. It is his hysterical antics in both of these movies that are the touchstone of his career. The Brooks/Wilder team up is comedic gold and in their first film pairing they are hilarious.

Wilder plays a shy accountant who falls under the influence of a has been Broadway producer, played brilliantly by Zero Mostel. "Flaunt it baby, flaunt it." Together they scheme to raise money for a play that has to fail in order for them to keep the money raised. Together they find a lousy script written by a New York Nazi. "Nawzi's. we weren't Nawzi's. We were NAZIS!" They get a hack director, "Turn, turn kick turn". And a beatnik lead actor. "Is this the audition for Boomerang Baby?"

The brilliance in the comedy here is that it breaks the traditional joke routine. Most comedies are set up this way. There is the straight man who sets up the comic. The joke being that the straight man really is not funny except in his reaction to the joke the comic has made. Abbott and Costello being the perfect example of this. Here it is almost hard to tell who the straight man is. At times it is Mostel when Wilder is having an attack of Hysterics. "They come here. They all come here." At other times it is Wilder, such as when he first meets the director. "Didn't we meet on a summer cruise?"

This is a farce full of odd ball characters. Even the small roles are humorous. From Ula the Swedish receptionist. "Get car." to the drunk at the bar. "I like toast." This movie is funny from every angle.

The best asset this movie has, if you can't already guess, is the dialogue. I could quote this movie all day. Mostel and Wilder have that comedic gift of being able to enunciate in just the right place to make a line as funny as it can be. Current movies, like Austin Powers, prove that an important part of a comedy is the dialogue that it leaves with the audience. Here you have Mel Brook's great lines being delivered by great comedians. 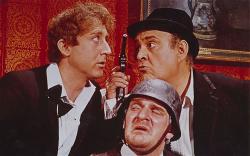 Gene Wilder, Zero Mostel and Kenneth Mars in The Producers.

"Max Bialystock:  Theatrical Producer" reads the sign on the door at the beginning of this comedy classic, and a truer sign was never painted.  Because behind that door works (and lives, it seems) the most theatrical producer ever invented.

Eric and Patrick are both right when they say how funny this movie is and how funny both its leads are, but Zero Mostel as the over-the-top, broken down, has been of a producer, is the heart and soul of this movie. He manages to steal scenes from Gene Wilder and despite Eric's statement that there is no straight man, even forces Gene to play the straight man at times, never an easy task, but one that Mostel pulls off completely.

The only weakness this movie has, which isn't enough to mar the near perfection of it, is that once the play has been staged, I always feel when watching that the climax of the movie has passed.  The last ten minutes of so always seem anti-climatic to me.  Although that's not entirely fair since one of my favorite lines in the movie is spoken during these last 10 minutes.  "You can't kill the actors, Max!  They're human beings," Leo says.  "Human beings?  Have you ever seen them eat?" Max replies.

A funny, funny movie that as Patrick and Eric both mention, is made all the more memorable by the classic dialogue. If The Producers, Blazing Saddles, and Young Frankenstein are Mel Brooks masterpieces as Eric claims, and I'm not about to dispute him, than The Producers stands as the best of them.  Blazing Saddles is just a little too juvenile, Young Frankenstein is really Gene Wilder's project (he wrote and monopolizes the movie), where as The Producers is pure Mel minus the penchant for childish humor that plagues so much of his later work.

The Producers is hands down the funniest movie made in the 1960's. 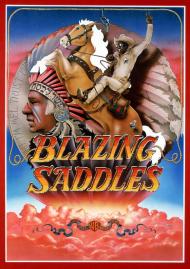 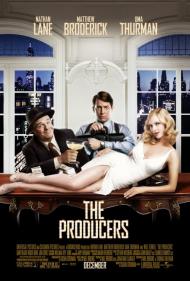