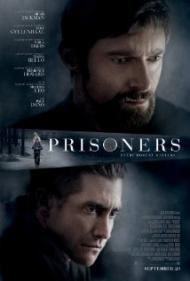 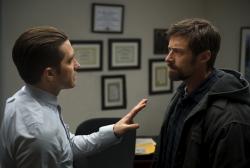 Prisoners is a very dark film about how desperation can push people to limits they never knew they were capable of.  This is a film that may spark some conversation after viewing it. Ask whomever you saw this film with, who was the criminal and who was the victim? They may not see it the same way you did.

Keller Dover is a married, middle class father of two. He is a hunter and survivalist. His basement is fully stocked with food, propane and other supplies. His daughter Anna, recently lost the whistle he gave her to carry with her at all times, in case of an emergency. The movie begins on Thanksgiving with the Dovers attending dinner at a neighbor’s house. They have two children the same age as the Keller’s. After dinner, while the teenagers watch television in the basement and the parents talk in the living room, the two daughters decide to walk back to the Dover’s house to get Anna’s whistle. They never come back.

What follows is an investigation that leads the police to a mentally handicapped man who is found driving a trailer that the teenagers saw down the street from their home just before the girls went missing. No evidence is found on him or in the trailer. When Keller learns he is being released from custody, he confronts the man in front of the police station, who says something to Keller that confirms to Keller the man’s guilt. Keller decides to take matters into his own hands.

That is only the first quarter of the film. Other suspects appear and some twists and turns occur as a larger mystery slowly comes into focus. As this is a thriller better left to the viewer’s discovery, I can only say that you will need to place yourself in everyone’s shoes to stay afloat in this quagmire of sadistic frustration.

The performances are all top notch. Jake Gyllenhaal has become a real fine actor. We never learn much about his character, but he carries himself in a very convincing way. As the officer in charge of a very emotional investigation, he has to tip toe around issues but be firm when it calls for it. It is a wonderfully honest performance.

The standout of the movie though is Hugh Jackman and I hope some awards come his way. He is playing a man on edge that has to cater to his wife’s emotional instability as well as his own frustrations over an investigation that does not seem to be getting results fast enough.  His outburst in the car with Gyllenhaal is an emotional punch to the stomach.

I cannot give too much of the plot away but as I left the theater I pondered to myself the philosophical debate of crime and punishment.  As much as this film may spark a conversation, I would like to comment that the filmmaker’s decision to end the movie as they did was a bit weak. We know what will happen but the ending as shown denies us the emotional impact of it all.

This is a finely acted drama that presents a question of morality, or at least it starts out that way. Jackman and Gyllenhaal both deliver rock solid performances and they should both be remembered come award's season. However, it's also a movie that runs at least 45 minutes too long, evolving into a fairly standard Hollywood thriller in the final act. I also agree that the ambiguous ending is one of its weakest aspects.

Canadian director Denis Villeneuve makes his English language debut with this film and he does a very nice job. Several long, mesmerizing, moodily shot scenes are played without dialogue. He is aided by veteran cinematographer Roger Deakins and together they create a film with lots of gloomy, rain filled days and shadowy nights. These artistic flourishes do add to the running time, but they also enhance the experience.

Also adding to the running time is the way the script telegraphs what's going to happen next in several scenes. This is done partly to build suspense but there are several moments in the film where it's very clear what's going to happen next and it takes far too long for the inevitable to happen. For example, and without giving anything away, several members of the audience I saw this with were actually yelling at the screen, "Blow the damn whistle already!", at a key moment.

Although Jackman and Gyllenhaal do share several scenes, including the dramatic one in the car that Eric mentioned (which unfortunately has also been shown in previews for the past several months, thus undermining some of its dramatic effect), at times it almost feels as if they're in separate movies. Jackman is in a dark drama that questions when someone has crossed the line when it comes to protecting their family, while Gyllenhaal is in a more formulaic Hollywood thriller. There's plenty of crossover, but the film starts as one then morphs into the other as it goes along.

Despite its long running-time and weak final ending, this is still a well-made film. It's not quite as satisfying as it could have been, but it still manages to entertain. 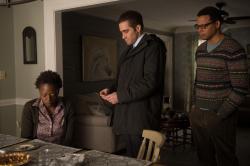 To what extremes would you go to save the life of your child? This is the big question raised by Prisoners, a compelling crime thriller with a complex moral center. When the true villains of the piece are revealed we learn that what motivated them was the idea of turning good people into monsters by taking away their children. Keller Dover reacts in exactly such a way. His actions go far beyond what most people are capable of – or at least what they think they are capable of. The ambiguous ending allows the audience to decide for themselves just what the denouement entails.

As both my brothers already pointed out, the cast does terrific work here. I have never seen Hugh Jackman display such intense despair and frustration. He goes from a God fearing family man to a wild animal ready to tear anyone to pieces with his teeth if it will bring his daughter home safely. Jake Gyllenhaal has the harder role. I agree wholeheartedly with Eric's contention that he gives a wonderfully honest performance, without adding any unnecessary histrionics to the part.

Prisoners does unfold at a languid pace but it is beautifully shot. As Scott wrote, it maintains a consistent mood throughout. There is a sense of impending doom hanging over these characters' heads like a storm cloud about to erupt in a squall at any moment. I do see Scott's point about the final act being a bit formulaic. And for such a dark movie the ending feels a bit too pat. It may not be exactly what you would call a feel-good ending but neither is it as completely realistic as it could have been.

Eric, to answer your question, I don't believe Keller Dover is a criminal, but he does commit several crimes, if that makes any sense. He acts out of a sense of desperation, knowing he is in a race against time. Yes he crosses a line. Hell he completely obliterates it. But his motive is to save lives, he gets no joy out of torturing Alex Jones. Keller Dover goes on a morally complex journey in Prisoners, and it's riveting to watch this intelligent thriller unfold.