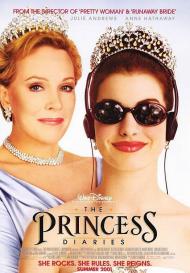 Anne Hathaway in The Princess Diaries.

Every year at Halloween I can always count on having a plethora of little girls dressed as princesses come to our front door looking for candy. Like little boys fantasizing about being a superhero, girls seem to fantasize about being royalty. And its no wonder when you consider a majority of Disney's cartoons star Princesses; Snow White, Sleeping Beauty, Aladdin and Pocahontas. Now Disney pushes the fantasy to a live action film in The Princess Diaries.

The movie stars Anne Hathaway as a nice, quiet, dorky girl who no one ever notices in school. My favorite line is when she tells her one and only friend that "someone sat on me again." Then one day she is told by her long absent Grandmother that she is in fact a princess. Suddenly, of course, everyone in school notices her, including the guy who only dates cheerleaders. The guy with whom she has been having kissing fantasies about.

The part of the grandmother, Queen, is played by Julie Andrews. She has stated in interviews that her own family was very common, and that all of her royal airs are acting. With Andrews voice, diction, poise and film presence it is very easy to believe that her character was born and raised royal. Andrews gives this movie allot of its class.

Hathaway's character goes through a rapid tutoring in order to appear more proper at the ball which is where the Queen intends to announce her as the royal heir. Hector Elizondo, who's hotel manager coached Julia Roberts prostitute in Pretty Woman is back in the Henry Higgins role, only this time he is a Body Guard slash dance instructor. With him and the Queen instructing her and all the sudden pressures of being popular in school on her shoulder, will this once plain Jane make it to the ball on time to show off her big gown and tiara? If you don't know the answer, then you have never seen a Disney cartoon.

Raiders Of The Lost Ark is a 4 star movie. Keep in mind that it is a guys 4 star movie. So with that I give The Princess Diaries 4 stars. It fulfills an entertaining fantasy for its target audience. What more can you ask from a film?