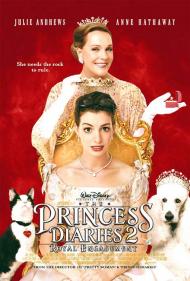 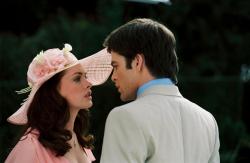 Unlike the first Princess Diaries movie, this sequel is a bit out of reach. The first film was about a dorky high schooler who suddenly found herself in a position of being quite special. On some level, anyone could relate to that. This installment is about a klutzy royal who is forced, by politics, to get married. Can anyone relate to that?

Hathaway and Andrews reprise their roles as Queen and Princess of Genovia. Princess Mia is going to take over the throne, as her grandmother is about to abdicate. However, a member of the Genovian Parliament points out an old un-enforced rule that states a female ruler must be married. Thus, Mia gets herself engaged to a British royal. In the meantime, she falls in love with the said Parliament member's nephew.

The movie moves along at sitcom pace with about an equal amount of laughs as an average sitcom. The Queen has her own side plot line involving her unrequited love for her head of security. The biggest highlight of the movie is that Julie Andrews sings. It's only one song but it does remind the audience what a rare talent she is.

Disney, as usual, goes over board on being politically correct. The, pseudo European, country of Genovia is a confusing cluster of nationalities and races. The Genovian accents include American, British, French, Italian and Scottish. Genovia as a European melting pot just makes the setting seem all the more fake.

Not nearly as good as the first one, Princess Diaries 2 will likely satisfy it's core audience, young girls, but it will not create any new fans.