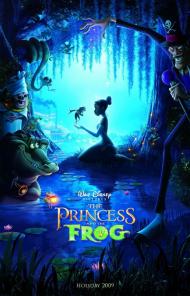 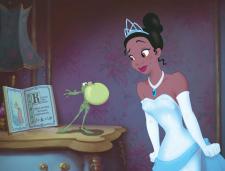 Bruno Campos and Anika Noni Rose voice the Frog and the Princess.

It's been since 1998's Mulan that Disney has added a Princess to their collection. Given that reportedly their Princess merchandise collection earns them billions each year, this seems surprising. In any case, with the release of The Princess and the Frog, they have finally gone back to the well and this time, after having a blonde, brunette, red head, Asian, Indian and Arabic Princess, they've added an African American one.

Although the film shares the same title as an old fable, the script here only uses the concept as a jumping off point. It's set in New Orleans in the 1920s. Tiana is a young woman pursuing her dream of owning her own restaurant some day by working multiple jobs. A young ne'r do-well Prince breezes into town one day and falls afoul of an evil Voodoo Priest and ends up turned into a frog. Tiana inevitably kisses the frog, but instead of returning him to his natural form she ends up a frog herself. Her and the Prince, along with a few sidekicks must then defeat the Voodoo Priest and return the two of them to their human form.

The animation is (mostly) hand-drawn and quite good, if never breath-taking or ground-breaking. I hesitate to say this gives it a warmer appearance then completely computer generated animation, but it does give it a different look.

Like nearly all Disney cartoons this one is a musical and while the songs are okay, none of them are that memorable. I wasn't humming along or singing some catchy refrain after wards. They're fine, but nothing special. It shies away from the more typical Disney style show tunes and instead features songs more appropriate of the film's setting.

As usual there are a few funny animal sidekicks. I quite enjoyed the musical crocodile, but it's the Creole Fire-fly who steals the film and gives it some heart. He provides some laughs and (believe or not) provokes the most genuine emotion in the whole movie.

The Princess and the Frog may not be the greatest of Disney cartoons, but it's certainly good enough. Tiana can easily take her place alongside Belle and Arial, even if she'll never quite reach the level of Snow White or Cinderella. 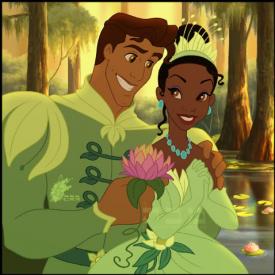 Prince Naveen and Tiana in The Princess and the Frog

The Princess and the Frog is a very delightful addition to the pantheon of Disney princess films. Like so many, it starts with a dream and ends with a wedding. In between is a nicely paced fantasy adventure/love story. Although the ethnicity of the characters may be new to the genre, the story is a tale as old as time. Throw in peppy, yet forgettable, songs, some animals to provide laughs and you have a Disney cartoon right out of the mold.

My favorite scene is when Tiana first meets the frog. He attempts to charmingly get her to kiss him. When that does not work he promises to buy her a restaurant. What kind of a moral lesson is it to teach young girls that it is okay to exchange physical affection for financial gain?

Since they end up married I guess we can excuse such an irresponsible piece of writing. When they do finally wed, the witch who marries them with a snake wrapped around her neck tells the Frog Prince, “Get to it hop-a-long. Give yer lovely bride some sugar.” It is so romantic!

I will concur with Scott that although this cartoon is a musical, none of the songs are that memorable. To this day I occasionally find myself humming along to “A Whole New World” from Aladdin (1992) or singing to myself “You’ll be in my Heart” by Phil Collins from Tarzan (1999). The songs presented here exited my head as soon as they entered.

The racial makeup of the characters in The Princess and the Frog may be inconsequential to the entertainment value of the story but so far that is all that it is remembered for. In fact, look closely at Prince Naveen. Sometimes he looks quite dark skinned and other times very caucasian. Do a google image search and tell me me why that is. Who were they even trying to kid? The characters could have been of any color or nationality. Disney made this film simply as an attempt to broaden their demographics to sell more merchandise. 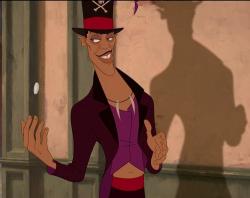 Keith David voices Dr. Facilier in The Princess and the Frog.

Shame on Disney for taking so long to include a black princess. They are hardly deserving of a prize at this late date. I mean really, we had a black president before we had a black Disney Princess. Thankfully, as both my brothers mentioned, the story doesn't make a big deal of this fact and the result is an enchanting throwback to the golden age of Walt Disney animation. It may not rank with the very best of the classic Disney cartoons, but it is a worthy addition to the canon.

Scott may hesitate to call the hand-drawn animation “warmer” than what CGI can create, but I won't. The look of this movie is exquisite. Now this is what a cartoon should look like. It is so easy on the eyes and the colors really pop. You can actually see where the lines were drawn to make the characters. The visual style of the movie emulates two specific Disney classics. The scenes in New Orleans were modeled after Lady and the Tramp, while the bayou scenes copied Bambi. You can't get much more traditionally Disney than that.

It's surprising that Disney took so long to get around to this fairytale. The Frog Prince usually comes first in any collection of stories by the Brothers Grimm and it contains all the classic elements of a great fairytale. Disney had the good sense to choose an updated version of the story called The Frog Princess, written by E. D. Baker and first published in 2002.

As Eric wrote, this movie is straight out of the classic Disney mold. If only the musical score were more memorable. Missing are a great ballad and a catchy uptempo number that makes you tap your toes and sing along. One thing to be said for this movie is that the voice actors did all their own singing as well. The previous hand-drawn Disney cartoon to do likewise was Beauty and the Beast (1991).

While you root for the two leads to get together, Disney usually conjures up a memorable bad guy for the audience to hiss at. The voodoo witch doctor called The Shadow Man (see photo) makes a pretty decent Disney Villain, in the tradition of Captain Hook and Cruella de Vil. His big solo number, "Friends on the Other Side", is the most memorable song in the score.

Louis the musical alligator and Ray the firefly are both great additions. They provide humor and heart. I agree with Scott that Ray's tale of unrequited love with the Evening Star is surprisingly touching. Ray thinks it's a female firefly and calls "her" Evangeline. The Evening Star is, of course, really the planet Venus, named for the Roman goddess of love. The name Evangeline comes from the Henry Wadsworth Longfellow poem, which is particularly beloved by the Cajun people of Louisiana.

Eric, as a fan of the Three Stooges I'm surprised you didn't mention the three frog hunters who attempt to capture Tiana and Prince Naveen after they've been transformed into frogs. These three bumbling idiots were clearly modeled after Larry, Curly and Moe, and they engage in a very Stooges-like bit of physical slapstick in their one brief scene.

Fans of traditional hand-drawn animation will thoroughly enjoy this interpretation of the timeless fairytale. The Princess and the Frog is a hopping good time (I couldn't resist).