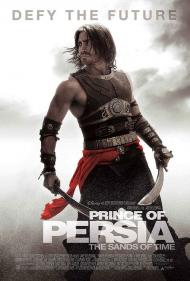 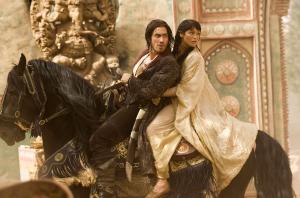 The problem with turning a video game into a movie is that the source material is all show and no substance. Video games are about action. Although they may have story modes and plot exposition, they still never create well rounded characters. This leaves the player to impose whatever personality traits they wish onto the main characters.

Prince of Persia: The Sands of Time is a video game in which a Persian Prince, Dastan, attacks a city with his father’s army, finds a magic dagger, and meets up with a hot chick. He has many adventures in which the magic dagger helps him out. "Releasing the Sand turns back time. Only the holder of the Dagger is aware what's happened."

With that, the movie decided to make him a street urchin who the King decides to adopt. The king already has two sons and heirs. With their uncle in tow, the three princes lead an army to attack a city they believe has been producing weapons to be used against them. Instead of going through an elaborate hunt through the palace, Dastan gets the dagger literally dropped at his feet.

My son has played the first three games and loved them. Besides the reworked origin, he pointed out that they changed the girl’s name from Farrah to Tamina. The biggest disappointment though, was that Dastan does not do his signature run along the wall move. It is like making a Superman movie and not having him fly.

Gyllenhaal is fine as Dastan, but he does nothing particularly great. He plays him as the script dictates, but adds very little charm. The attractive Gemma Arterton has become the fantasy chick of the year, starring in this and Clash of the Titans. Alfred Molina provides the laughs, and keeps the movie very political, going on about being a small business owner and having to pay taxes. Speaking of politics, the city they attack ends up not being responsible for manufacturing weapons of mass destruction. Damn faulty intel! 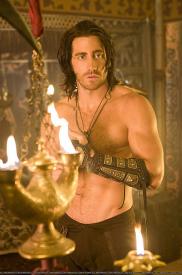 He looks the part but lacks personality and comic flair.

I have never played the video game this movie is based on so I have no way to compare them. In the action/fantasy genre this movie is but a minor entry. It breaks absolutely no new ground and although it manages to entertain it also has several flaws.

Jake Gyllenhaal, of whom I am normally a fan, is woefully miscast here and he has exactly zero chemistry with Gemma Arterton. The part of Dastan called for a dashing, swashbuckling type with decent comic timing in the age old art of the quip; someone in the mode of Douglas Fairbanks or Errol Flynn. Gyllenhaal is too much of a serious actor. He handles the action scenes well enough but the lighter moments don’t come off.

The pacing could have been better as well and I am oh so tired of modern camera trickery. Why do most of today’s directors seem to want to constantly draw attention to the fact that we are looking through a camera lens? Oh, look and see what we can do with computer graphics! Isn’t it amazing? I’m bored with it already. Let’s get back to simple yet compelling storytelling and less over-the-top action sequences.

Do yourself a favor skip Prince of Persia and rent Gunga Din instead. Now that is a great action movie. 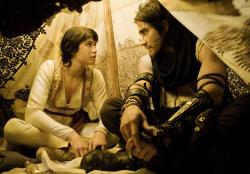 Jake Gyllenhaal and Gemma Arterton in Prince of Persia: The Sands of Time.

The video game industry is a $20 billion a year industry and Hollywood must look at that total and drool at the thought of tapping into it.  It's the only reason I can think of why they continually attempt to adapt games into movies.  The reasons they continue to fail are that video games, despite the fact that sometimes they look like movies, don't come in nice little 3 act storys that translate nicely into a 90 minute plot.  So the filmmakers either try to emulate the level/mission structure of the game, which makes for a bad movie, or they jettison the game storyline and write their own, potentially upsetting the game's core fans by the changes.  Instead of adapting games into movies, studios should be doing the opposite.  It's far easier to take a movie and expand it into a video game than it is to compress a video game into a movie.

As for this video game adaptation, I was reminded more of Disney's Alladin than I was of the Prince of Persia.  Dastan's street rat beginnings cetainly put me in mind of Alladin's similar origin and Tamina wasn't a million miles away from Jasmine.  I kept waiting for them to break into a duet of "A Whole New World".

As for casting, I agree that Jake Gyllenhaal is only okay in the part.  Dastan should have been more charming with a cocky, shit-eating grin and a lot of flair.  Instead he's just a generic action hero with no particularly distinguishing feature.

Likewise, Gemma is fairly bland as well.  Her career is as hot right now as her looks, but this movie doesn't do any favors to either.  She's definitely looked better.  Why not actually hire a middle eastern actress for this part?

Some scenes do look impressive visually, but that's not enough to hold your attention, especially with the 2 hour running time.  This is such a simple, light little story that it definitely could have been edited down.  I'd have been more forgiving at 90 minutes than I was at 120.

There's just nothing very compelling in this movie.  I enjoyed bits of it and I wasn't really bored, but at the same time I can't ever imagine wanting to watch it again.