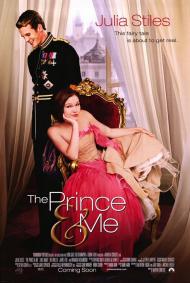 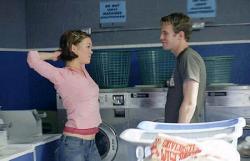 Julia Stiles and Luke Mably in The Prince and Me.

Probably even before Hans Christian Anderson wrote The Little Mermaid, in 1836, have girls dreamed of marrying a Prince. To this day that fantasy is still very much alive as the Princes of England constantly make the tabloids every time they get photographed with a different girl. The Prince & Me is just another fable/movie about a Prince who falls for a girl outside of his "approved" dating circle.

Prince Edward is the Hollywood stereotypical rich, spoiled youth. He races sports cars and is surrounded by suck ups and hanger ons. The Prince get his parents ire up, again, for appearing in the tabloids for sucking face with a couple of girls. After watching a commercial for a videotape of Wisconsin Girls Gone Wild, he decides to go there as a college student, to apparently have a good time and get away from his parents.

Once in Wisconsin he meets Paige, who is the daughter of, what else, dairy farmers. After all, this is Wisconsin, doesn't everyone there own a cow or two? Paige has big dreams of college success and becoming a Doctor so she can work with Doctors without borders. Let me make this easy: Boy meets girl. Girl does not like boy. Boy persists until girl likes boy. Boy gets outed from the royal closet so girl no longer likes boy. Boy goes back to Denmark and girl realizes she loves boy. So on and so on.

The best jokes come from the prince's encounters with common Americans. When he spends Thanksgiving with Paige's family, her brothers ask him who famous has come from Denmark. Nothing registers when he mentions Kierkegaard and Hans Christian Andersen, but when he tells them that a sports illustrated model and a member of Metalica are Danish her brothers say, "Ok, that's gotta be the coolest country in the World now." and "Seriously, you should be a superpower." The Prince's American roommate gets a few laughs. His best line is when Paige asks him where is Edward? And he replies, "Oh, you mean, prince-who-ate-my-triscuits-and-didn't-replace-them?"

Paige's interactions with the royal family is not so entertaining. The Queen is suspicious of her, as expected. The Prince's sister loves her on sight. The servants all like her because she is common like them, and she hugs allot.

The real problem with The Prince & Me is that the characters make little sense. Prince Edward comes to Wisconsin why? If he wants a wild time with wild girls he should just stay in Denmark where prostitution and marijuana are legal. Paige is a dedicated, idealist who shucks it all away for love, then changes her mind. She flies to Denmark where she instantly gets the royal treatment without ever letting her parents know she is about to become Queen of a European Nation. The only reason given to why they fall in love is that she does not like him at first and this intrigues him. His valet observes that she is the first girl to turn him down for a date because she is the first girl he has asked who didn't know he was royal.

Sure, the entire point of this movie is to feed the "marry a prince and live happily ever after" dream. But the only attempt at a unique plot is to have the couple break up several times. Like all romantic comedies, we know where the story is going. More consistent acting characters and a couple of better plot twists, on the way to the predictable ending, could have helped dramatically.