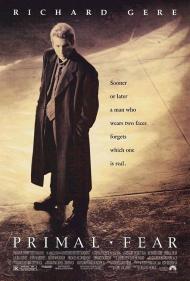 First and foremost, Primal Fear will be remembered because it was Ed Norton's film debut. Not only was it his first movie, but he stole the show from Richard Gere and Laura Linney, who each do great work. His last scene will stay with you long after you see the movie.

Gere plays the stereotypical arrogant lawyer. He is smooth as silk as he moves about the screen, manipulating everyone around him. He gets such juicy lines as, "If you want justice, go to a whorehouse. If you want to get fucked, go to court." and, "I don't have to believe you. I don't care if you are innocent."

Linney, perhaps the most underrated actress of the past ten years, plays his former girlfriend who goes up against him in court when Gere defends an altar boy accused of butchering a bishop. Some actresses exude sex just by being on screen. Other actresses look like the girl next door no matter how they dress. Linney always comes across as a woman who can hold her own. It's not in how she acts necessarily, it is in her presence. She is an old school actress in the form of Katharine Hepburn or Rosalind Russell. Her going up against Gere in this movie is reminiscent of Hepburn and Spencer Tracy battling it out in court in Adam's Rib (1949).

As good as Gere and Linney are, this is Norton's movie. He draws you in as his character is so likable and innocent. Then you see that there are deeper layers in Aaron's personality. As the movie progresses, you literally see Norton morph from one character to the next. By the end of the movie you are not a bit surprised that he was nominated for an Academy Award for this role.

With such a great cast the movie needed to keep the three main characters on screen together more than it does. Too often, Gere is off on a side plot or Linney is shown having her own issues. However, when any combination of the three get together, the movie pulses with excitement and tension. The final scene in court, in which all the main characters are present, is the best in the movie. Linney and Norton chew it up like dingos on a carcass. Then shortly their after, Gere and Norton share the final scene which plays like cold water splashed on your face.