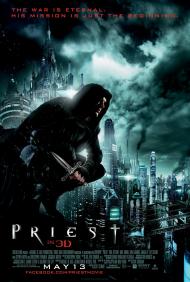 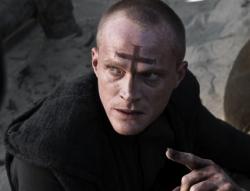 And the first nominee for worst movie of the year is....Priest!!! This over the top, often unintentionally funny, graphic novel adaptation features some horrible dialogue, laughably unbelievable action, plot holes and general silliness. Truly this is one of those movies where I wonder if the people involved realized how bad a movie they were making or if somehow they'd convinced themselves this was good stuff.

The plot is a watered down, drained of all emotional impact, ripped off version of John Ford's 1956 Western classic, The Searchers. Only instead of John Wayne tracking down a niece kidnapped by Indians, whom he intends to kill if she's been spoiled by them, you have Paul Bettany tracking down a niece that has been kidnapped by vampires, whom he intends to kill if they've infected her. And instead of being set in the American West of the 1800s, this movie is set in some alternate reality future where the Earth has been decimated by a long standing war between humanity and vampires.  My apologies if my description makes the plot sound interesting in any way.

While the plot of the movie is ripped off from The Searchers, the look of the city where the story starts is ripped straight out of Bladerunner. The wasteland featured outside of the city reminded me of Planet of the Apes. There's just not much original in any part of the movie.

Although the main antagonists are referred to as vampires, they bear little in common with the more traditional bloodsuckers. They're really just ravenous animals with no intelligence, who look and behave nothing like humans.  They secrete a sticky substance that they use to build giant hives. The only trait they seem to have in common with real vampires is their inability to survive in sunlight. There are some humans in the film who voluntarily work for the vampires, but given how disgusting and apparently brainless the "vampires" are, just why a human would want to do this is never explained. Only one character in the entire film resembles what we normally think of as a vampire, but then he immediately breaks this illusion by going out in the sunlight.

But then there are a lot of things that are never explained. For instance, we are told that there was a war between humans and the "vampires" and that the humans won. We are then told that the remaining "vampires" were rounded up and put on reservations, but what we aren't told is why. Why were the "vampires" allowed to live at all? Why weren't they simply all killed?

Even the action is poorly done and often just silly. During one scene, Bettany's Priest is fighting a hive guardian (a sort of giant, really ugly "vampire" dog) and another Priest (played by Maggie Q) throws rocks into the air, upon which Bettany proceeds to climb as though they were stairs, as they float through the air. It's supposed to be one of those movies where you think, "Yeah!", but it's so ridiculous, I just laughed instead.

The dialogue is equally bad. Bettany instructs a young sheriff who is traveling with him on how to kill "vampires" with highly articulate phrases such as, "Focus" and "See point A to point B". The fact that these lines are spoken so seriously as if they are true secrets to live by is again unintentionally funny. When the "point A to point B" line is repeated later by the cowboy in another scene that is supposed to rouse the audience, I again found myself laughing instead.

With its high production values and fairly well known cast, you'd expect there to be something redeeming in this movie, but I'm at a loss to think of what it might be, except perhaps its blessedly short running time of just 1 hour and 27 minutes. It's so short a movie that you get the feeling the filmmakers really did have an idea of how bad a movie they were making and so decided to trim absolutely everything they could from it. For that I thank them, but for nothing else.

Priest is a B movie based on a graphic novel. It is set in some sort of bleak alternate world where vampires (depicted here as a separate sightless species) and humans have been at war for centuries. The Church (led by an evil (and hammy) Christopher Plummer) controls society and keeps the populace safe.

Priests are warriors with special fighting abilities. As Scott wrote, at the time the movie begins the vampire menace is supposedly under control with all remaining bloodsuckers inexplicably corralled on reservations. The army of priests has been disbanded.

Paul Bettany stars as the most powerful priest warrior of them all. He is haunted by the memory of the loss of his best friend and fellow vampire hunter, who, unbeknownst to him, has now become a “human” vampire. When his niece is kidnapped by vampires this priest makes like John Wayne in The Searchers and sets out in pursuit. (FYI Scott, I wrote this before reading your review so I left my Searchers reference in). The Church, meanwhile, sends other priests after Bettany.

All of this leads up to a finale on a speeding train that is spectacularly awful.

I agree Scott, Priest easily has my vote for worst movie of the year thus far. The script is every bit as terrible as you said it is. But that is far from this movies’ only problem. The actors all seem to be competing to see which of them can convey the least amount of expression with their face.

It may have some “high production values” but the look of the movie is bland. Everything is the same dull shade of blue/grey and the CGI vampires look like they were done on the cheap. I also concur about the mercifully short running time being the one positive thing Priest has going for it. That and the fact that I was so amazed at just how bad it was that I never had time to be bored. Unfortunately the ending suggests a sequel is in the works. 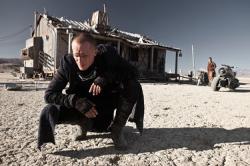 As my brothers pointed out, Priest clearly stole some plot points from The Searchers.  What they did not mention was that Priest also steals heavily from Return of the Jedi.  The Priest are very much like the Jedi from the original Star Wars films.  They are a faith based group of soldiers with extraordinary abilities.  The scene with Black Hat asking Priest to join him or die on top of the train is reminiscent of Darth Vader asking Luke to join him or die on top of the mine shaft.  No, Black Hat does not reveal that he is Priest's father, but a similar scene comes a little later.  Black Hat telling Priest that, "Your faith has failed you."  Is quite similar to the Emperor telling Luke, "Your faith in your friends is yours."  Referring to his weakness.

My brothers also commented on the short running time, which I found interesting because if I had my way, another 20 minutes would have been cut.  After finding out about the girl's abduction, Priest goes to the leaders to ask to be reinstated in order to rescue her.  Then he goes to a bar for conversation and a fight.  Is he in a hurry or not?  Later, Priest, Priestess and Hicks discover that a train full of vampires is speeding toward a city of humans and they must leave right away to stop it.  First they have to charge the bikes, then burn some bodies, then talk of unrequited love.  The characters have an odd lackadaisical attitude for being heroes in an action movie.  If the characters are not in a rush how is the audience supposed to feel one.

I also agree with Scott about the poor dialogue.  In one scene Priestess and Priest talk about the lousy economy and then post traumatic stress disorder.  In the very next scene Hicks is asking Priestess about her sexual experiences, or lack their of, as well as Priest's celibacy.  Both conversations seem forced and out of place.  The one and only line I kind of liked was when Black Hat said, "If you're not committing sin, you're not having fun."

Priest seemed like a film that started with some decent, however unoriginal, ideas, but the film makers were simply unable to translate them onto film.  We should not be at all surprised as Scott Charles Stewart also directed Paul Bettany's other disastrous fantasy action film Legion.  Stewart originally broke into film working in special effects, taking to directing later.  Why does Bettany continue to work with a guy who clearly has no idea how to film a story?