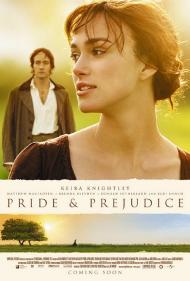 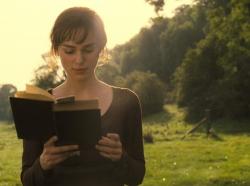 Keira Knightley in Pride and Prejudice.

When I first heard about this latest remake of Pride & Prejudice, the first thing that went through my mind was, "Why bother?" The Internet Movie Database lists 8 different filmed versions of this story (including this one) and another remake seemed too much like returning to the same well after it had long run dry, particularly after the definitive 1995 mini-series version featuring Colin Firth. After seeing this latest remake however, it seems that the Jane Austen well still has holds water after all.

If for some reason you missed one of the earlier versions, or fell asleep during High School English, the story is a simple one. Mr. and Mrs. Bennet are the parents of five daughters, all ranging in age from their mid-teens to their mid-twenties. Because of the laws in England at the time, women could not inherit property so when Mr. Bennet dies, the women will be homeless, unless they can secure husbands who will provide for them. When rich Mr. Bingley arrives in the neighborhood with his equally rich friend, Mr. Darcy, Mrs. Bennet sees a chance for two of her daughters. But naturally, the course of true love never runs smoothly in these stories and many obstacles must be overcome before the conclusion of this comedy of manners.

The character of Elizabeth Bennet is perhaps the most classic female character in literature. Her personality is still used as the model for women in romantic comedies to this very day. For an actress to portray her is similar to when an actor gets to play Hamlet. If you're going to do the classics, it doesn't get much more classic than this.

Unlike her role in this year's Domino, which was laughably unbelievable, the role of Elizabeth fits Kiera Knightly like a glove. Her posh accent and saucy flirtatiousness are perfectly suited to this character and the dialogue rolls off her tongue in such a way that it makes you wish that you'd taken elocution lessons.

The role of Mr. Darcy has always been overshadowed by Elizabeth and this isn't the exception. Unknown, at least in America, Matthew MacFadyen gets the thankless job this time around and he plays the stern, upright English men, whose exterior masks a passionate love, with the competent stiff-upper-lippedness that you expect from a British romance.

Playing the other colorful characters in the story are some pretty high-caliber actors as well. Donald Sutherland does a very good job as Mr. Bennet, the lone man in a house with six women. His final scene with Elizabeth is particularly touching. Brenda Blethyn plays Mrs. Bennet with equal skill. As the social climbing mother always on the prowl for a husband for one of her five daughters, she will make you laugh and want to slap her at the same time. And the always reliable Judi Dench plays the stern British Aunt with all the skill that you'd expect.

I always love it when a movie surpasses my expectations. Since so many movies are apt to do the opposite, it is doubly pleasurable to be pleasantly surprised by one. Whether this is your first or eighth exposure to this story, you'll find plenty to enjoy. 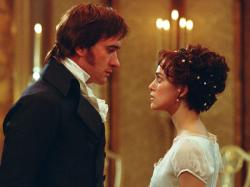 Matthew MacFadyen and Keira Knightley in Pride and Prejudice.

I am ashamed to admit it but I somehow made it through nearly 39 years of living without being exposed to any Jane Austen work either in print or on film. Happily that is no longer the case.

Pride and Prejudice is a great movie from what I can only imagine must be an even greater novel (reading it is on my list). I can't say that this is the best version of the movie since it's the only one I've seen and I've heard that the 1940 Laurence Olivier, Greer Garson version is quite good. Still this version works on nearly every level a movie should.

I'm curious as to how much of the original dialogue from the novel is used in the movie. I assume most of it, in which case the book was clearly waaaay ahead of its time, most especially in the character of Elizabeth. She is willful, strong-minded and completely independent. A 21st Century woman only with better manners.

Scott is right about the role of Mr. Darcy taking a backseat to Lizzie but I wouldn't call it thankless. In a similar fashion to how Rhett Butler is so memorable in what is clearly a second fiddle part to Scarlett O'Hara in Gone With the Wind, Mr. Darcy manages to hold his own against the high spirited Miss Bennet. He is, in some ways, the more complex character, since he is portrayed at first as the antagonist of the story. At any rate Mathew MacFadyen completely fulfills the requirements of the role.

Still this is and always will be Elizabeth Bennet's story. She IS one of the greatest characters of all time without really being extraordinary in any way. She gets the best lines of dialogue and is adept at couching insults in the guise of compliments, such as when she tells the incredibly dull and overbearing Mr. Collins, in response to his statement that he tries to give his compliments as unstudied an air as possible, “Oh, believe me, no one would suspect your manners to be rehearsed."

The final scene is quite simply devastatingly romantic. Elizabeth tells Mr. Darcy that he may call her Mrs. Darcy only when he is incandescently happy. He then proceeds to whisper “Mrs. Darcy" as he kisses her tenderly all over her face. I nearly swooned. 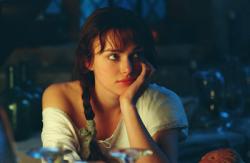 Knightley is so beautiful she can make a grown man swoon.

Patrick, when did you become an old woman? You swooned? I completely lost track of what I was going to write once I read that. How do I follow such a gay line?

What I liked about this movie is that it actually explains why Elizabeth and Darcy fall in love. Darcy is inexperienced with women and has set unrealistically high standards for his future bride. He is immediately intrigued with Elizabeth as she is obviously intelligent and does not throw herself at him as other girls are. However, his pride and prejudices keep him from taking his growing feelings for her seriously.

Elizabeth finds herself attracted to him early on as he is aloof, and later on because he proves to her he can be counted on. My favorite scene is when Darcy asks Elizabeth to marry him and she turns him down. I did not swoon, but it was the moment where he breaks out of his reserved nature and admits his feelings. Elizabeth meanwhile, turns down his proposal even though she still loves him. Both characters are revealing such raw emotions during this exchange that they become real and, oh hell! Maybe I did swoon. It is that kind of a movie.