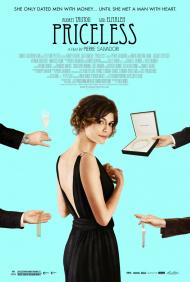 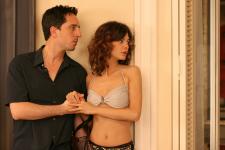 Gad Elmaleh and the beautiful Audrey Tautou are priceless in hors de prix.

The same year The Davinci Code was released (2006), Audrey Tautou played a beautiful gold digger in the French comedy, Priceless. She dates and sleeps with older rich men in exchange for expensive gifts. She roams the Riviera, in sexy dresses, searching for her next meal ticket.

Bored with her current rich older fiancé, she wanders into a Hotel bar. There she meets a rich man her age, Jean. They get drunk and take the elevator to his room. They are so wasted, they look like they just survived a tornado. They have sex and her fiancé breaks up with her. Not too upset, she simply moves in with Jean. Then she discovers that he is in fact just an employee of the hotel, and moves on, while he gets fired.

Jean has meanwhile fallen in love with Irene. He follows her to Nice, where his affection becomes obvious. She attempts to get him to go away by spending all of what little money he has. She does not pretend to be anything other than what she is for him.

Broke and lonely, he accepts a rich women’s offer to pay his hotel bill that Irene sticks him with. He soon becomes her boy toy. He runs back into Irene, who has a new sugar daddy, and they become friends. She instructs him on how to seduce. They compare their gifts. At one point, Jean gets a watch from his benefactor. He gleefully points out all of the jewels on it to Irene, “"That's not a watch. It's a treasure chest." He says proudly.

Tautou is gorgeous as hell in this film, and twice as charming. She explains to Jean that, “…charm is more valuable than beauty. You can resist beauty, but you can't resist charm.” Tautou, as Irene, has charm to spare. Jean however, is a more fascinating character. As the movie opens he is a workaholic, taking on any odd job around the hotel he can get. He even falls asleep on the job as he works so hard. After Irene’s influence, he becomes a lay about gigolo. Gad Elmaleh does not have traditional Hollywood leading man looks, but that only adds to his character. Simply by how he carries himself, we see him morph from a dork into a stud.

This is a traditional romantic comedy, except in it’s approach to sex. Both leads are in essence prostitutes. In an American film, the prostitute and the John must reform at some point. In Pretty Woman, Julia Roberts gives money to her whore room mate, and Richard Gere learns to treat her with respect. In Priceless, no one is a victim and no one is a criminal. The rich older people know what they are getting when they have sex with the young. The young know they are playing a dangerous game. Feelings get hurt, but everyone is sexually sophisticated enough to understand the rules.