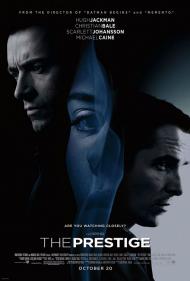 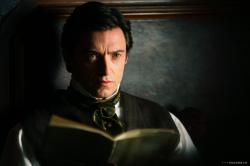 Hugh Jackman in The Prestige.

The Prestige, as you'd expect from Christopher Nolan (director of Memento and Batman Begins), is a stylish film with twists and turns. And with the four leads being Hugh Jackman, Christian Bale, Michael Caine and Scarlett Johansson, you can rest assured that the acting is all top notch as well. Throw in a first rate script with a twisty ending that may or may not have you guessing right up until the end and you've got the makings of a highly entertaining film.

The movie opens in London around the turn of the 19th century, with the death of magician Rupert Angier (Jackman), with Alfred Borden (Bale), another magician, as the only suspect. While Borden is held in prison during the trial, he is brought a copy of Angier's journal, which he reads and we see in flashbacks. One of these flashbacks reveals that years earlier, Angier got hold of a copy of one of Borden's journals and while Angier reads it we get a further flashback and so we have a flashback within a flashback, which allows us to see the story from both of the lead character's point of view.

Both Angier and Borden began their career's as apprentices to the same magician. Angier's wife was the magician's assistant. One night, Angier's wife died during a water tank trick because she was unable to untie the knots in time; knots tied by Borden. This incident is the beginning of the rivalry and hatred between the two men that will carry throughout the movie.

They both soon launch themselves into solo careers. Borden is the superior magician, but Angier, with the help of his mentor, Cutter (Caine), is a far better showman. Cutter hires Angier a pretty assistant (Johansson) and helps him learn a few new tricks. Borden on the other hand, while not as successful, performs tricks that Angier longs to master. After stealing Borden's greatest trick, The Transported Man, Angier becomes very successful, but still his greatest obsession is getting revenge on Borden by humiliation or any other means he can. His obsession lasts years and takes him around the world and costs him dearly, both emotionally and financially. Borden doesn't sit idly by either, matching Angier with acts of retaliation that prolong the rivalry. And the revenge on both sides isn't merely connected to their careers as both of them extract their pound of flesh from the other.

Jackman and Bale make great rivals and while at times Jackman's Angier seems like the protagonist, they each rotate in and out of that role as the story reveals its secrets. In the end you might be wondering if the film contains a protagonist at all or if both characters haven't each received what was coming to them. Caine's and Johansson's roles are both supporting as their character's lives are dictated by Borden and Angier.

I have to confess that I guessed most of the movie's ending, but it was still satisfying none the less. Unlike The Illusionist, which came out earlier this year and also involved a magician in the 1800s, The Prestige's ending is clever and is of the kind where you think back on all that came before it and think to yourself, "Okay, now it all makes sense." If you're going to have a twist ending, you've got to make sure that if someone watches it again, everything makes more sense that second time. The Sixth Sense is the best example of this kind of movie, and while The Prestige's ending doesn't contain nearly the kind of wallop that The Sixth Sense had, it is a satisfying one.

My only complaint is the running time. At over two hours, there is room for trimming. I wish film makers would take into account that when they make their movie 2 hours and ten minutes long, they're actually taking up 3 hours of the viewer's time when you factor in waiting in line for the ticket, the concession stand, and then sitting through the ads and the previews. If you're going to take up that much time, you need to make damn sure that the movie is as tight as it can be. While there isn't too much fat on this movie, it could still have been trimmed a bit more. It's a minor complaint that doesn't mar the overall quality of the film.

With Bale and Jackman for the women and Johansson for the men, the movie is sure to bring the crowds this weekend. But it's the great story that will generate the word of mouth that will make this movie a hit. 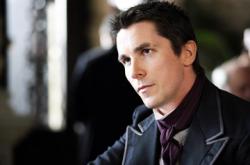 Christian Bale in The Prestige.

I watched The Prestige with an internal ache for the two main characters to make up and join forces. They go about hurting each other, and inadvertently those around them. If they had just made amends and partnered up, they would have become as great as they both dreamed. The movie at first seems complicated and then becomes macabre, but through it all, the character's passion for their art and their revenge is palpable.

Scott asks the question of who is the antagonist and who is the protagonist. To me it was clear that it was Angier. Sure, Borden's careless act initiates the feud, but Angier escalates it to an extremely obsessive and detrimental level. Had he simply accepted Borden's apology early on none of this would have happened. Of course, then we would not have such an interesting film.

Jackman is solid in anything he does but he is almost too big of a movie star to be an actor. It is to the point that when I watched him in this movie I was watching Hugh Jackman and not Rupert Angier. Maybe it's just me, or maybe it is that he has been in so many films lately that he is overexposed.

Bale is quickly becoming one of my favorite actors. He plays a dark character better than anyone. I never thought Jackman was the best choice for Wolverine, even though he does a decent job, but Bale is perfect as Batman. He has made a career out of playing characters that have secrets. Perhaps it is his voice or eyes, but Bale always looks as if he is about to become something else. At any moment he may change right in front of our eyes.

The Prestige is a film I will definitely watch again sometime in the future. It is one of those rare films that deserves a second look. I never felt it was too long and will gladly sit through it a again. 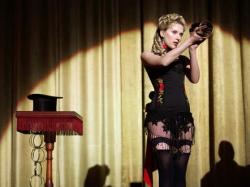 Scarlett Johansson in The Prestige.

I did enjoy this movie but some of the plot points seemed a bit far fetched to me. The character of Tesla (David Bowie) is the hardest to believe. This obsessed genius creates a machine that is light years ahead of anything else ever devised by man and then simply sells it to an illusionist; highly unlikely. If you can get past this fact, though, the movie is pretty astounding.

As my brothers mentioned the acting is first rate. Michael Caine never stops and unlike some actors he hasn't lost any of his spark or talent as he has aged. Jackman and Bale give superb performances too.

The set design is also well done. Victorian London has rarely been recreated this faithfully on screen.

Perhaps I am a bit slower on the uptake than Scott is but I was at first completely baffled by the ending. It took a while to figure things out. Like Eric, I will definitely want to watch this one again.