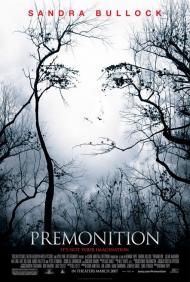 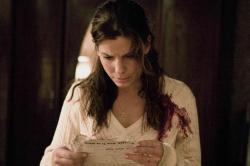 Premonition starts quite interestingly enough and it will have you guessing what is going on if you invest enough attention to it. But after a half hour you will feel like Sandra Bullock in the movie when she says, "Something is seriously fucked up."

Linda and Jim are a seemingly, happily married couple with two daughters. One day Linda gets a knock on the door and she is informed by a policeman that Jim died in a car accident. The next day she wakes up and he is alive. "I wake up and he's dead. I wake up and he's alive." Basically what happened, for whatever unexplained reason, is that the days of the week for Linda get all jumbled up. So at first it is Wednesday but then it is Tuesday and then it is Saturday and so on.

Everyone around her thinks she is losing it. Her mother even calls in some professionals. One day she finds that one of her daughters has cuts all over her face but has no idea why. Later she lives the day that it occurred on and she finds out how it happened.

Anyway, the point of the movie is to live and love every day because you do not know how much time you or anyone else has on this earth. Over the course of a mixed up week, Linda learns something about her husband and something about herself. She learns that love needs expression but she almost learned it too late. It is just like the Michael Jackson song She's Out of My Life, with less emoting.