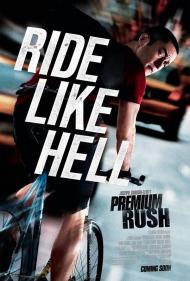 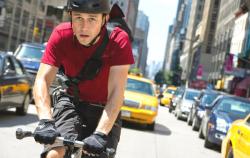 Premium Rush is clearly a movie where the concept came before the plot. Someone must have suggested making a movie about bike messengers in New York City and so a plot was crafted around that idea. This order of precedence is evident in the fact that there are some exciting and well filmed scenes of bikes racing through the city, but the plot is full of holes so big you could drive several bikes through them.

The Rush in the title is provided by an arbitrary deadline invented for the plot. A Chinese student at Columbia University needs to get an envelope to Chinatown by 7 PM. The package contains a marker for $50,000 that she's purchased from one set of Chinese gangsters to pay off another set of Chinese gangsters, so that her son can be smuggled out of China. If she doesn't get the marker to the gangsters in Chinatown by 7PM, her son will miss his boat. Why then, did she wait until just 2 hours before the deadline to buy the marker? And while the first mob boss offers to give her any assistance in case anyone tries to take her marker from her, he never offers to deliver it for her. Apparently, killing for her is all part of the service, but delivery costs extra. And so, apparently, would calling the second set of gangsters and informing them that they guarantee the money. There's no logical reason for any of this behavior beyond the plot needing some way to set up a deadline.

Joseph Gordon-Levitt plays Wilee, the bike messenger who picks up the envelope from Columbia. He immediately has a run-in with Bobby Monday, played way over-the-top by Michael Shannon, who wants the marker for himself, since apparently this is the kind of marker where you don't need to show ID to turn it into cash. The rest of the story is a straight out chase as Monday tries to get the marker from Wilee before he can deliver it.

This leads to more plot holes. Monday gets in his car and chases after Wilee, who is on his bike, but Wilee is soon able to lose him in the NYC traffic. Wilee then decides to stop and report Monday to the police. Why he doesn't just call the police isn't explained, despite him having a cell phone that he uses constantly throughout the film. While he's waiting to give his statement at the station, he learns that Monday is actually a cop, which retroactively brings up yet another plot hole. Why didn't Monday use his siren while he was chasing Wilee? Of course the biggest plot hole is that at this point Monday doesn't know where the envelope is being delivered and Wilee, if he hadn't stopped at the police station, could have calmly finished the delivery and ended the movie prematurely.

I know, I know. I'm being nit picky, but every time Wilee gets off his bike the action stops and the audience has time to think about these things. The only time it works is when he's riding. The chase scenes are exciting and watching Wilee and his fellow messengers weave their way through traffic makes for some fairly exciting scenes. Of course if Wilee didn't stop every now and then the envelope would just get delivered and the movie would be over.

The story is told out of order. This allows for plot details to be revealed after the fact, like Monday being a police officer for example. There are flashbacks during breaks in the action that help fill in the details and show certain scenes from multiple characters' viewpoints. It helps the story start right off during the action, but would the story have been hurt if it had been told more chronologically? Not really.

Gordon-Levitt is as likable and talented as he usually is and the rest of the cast is adequate, although as I said, Michael Shannon really hams it up. They help cover up the some of the stories' weaker points, but can't make-up for all of them.

Wilee brags about his fixed gear bike several times, going on and on about how it has no brakes and doesn't allow for coasting. The pedals are always turning. When this movie's pedals are turning, it works. When they're not, it doesn't. It's fast paced enough to keep you from being bored, but if you think too much about it, you may find it unintentionally funny. 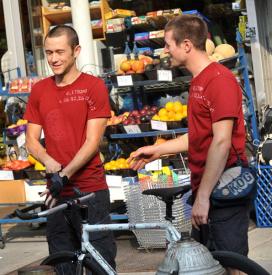 Joseph Gordon-Levitt is decent as Wilee, but other than being likable, there is not much for him to do but pedal.  "I like to ride. Fixed gear. No brakes. Can't stop. Don't want to, either."  He goes on and on about how he could easily be wearing a suit doing another job but loves the rush of bike delivery.  He mentions that on a good day he can make at most $80.  Preferring a low paying, dangerous job to a safe higher paying career is mildly interesting but does not in and of itself make a unique character.

Scott mentioned some plot holes while I was struck by all the ridiculous coincidences.  There are 22 New York police precincts in Manhattan, yet Wilee just happens to choose the one Monday works at.  Vanessa knows to find Nima in a bathroom at Columbia University?  My favorite of all the coincidences are with the bike cop who keeps running into Wilee all over town.  No matter where in Manhattan Wilee is, this police officer is right behind him.

The bike cop is played by stuntman Christopher Place, who has done stunt work on numerous television shows as well as in films such as American Gangster,  Salt, Captain America: The First Avenger, 21 Jump Street, The Dark Knight Rises and of course his own here.   Other than playing The Ripper in My Soul to Take (2010), in which you could not even see his face, this is his largest acting role.   His lines range from "NYPD, you in the red shirt, pull over."  to his final, "I am done."  After he also gets tired of the coincidences.

Although riddled with flaws, I found the most groan inducing moment to be when Vanessa calls her boss and says, "I need a flashmob like two minutes ago!"  and he says, "Time to call in the cavalry."  Her big plan to save Wilee is to hope a bunch of bike messengers on their off time, will be willing to bike across town to harass a dirty cop?

Wilee is faced with some options.  One would have been for Wilee to explain to the bike cop what was happening.  Some traffic violations were his only crime, and they are probably fairly common with bike messengers anyway.  The other option is for him to deliver a payment to some very dangerous criminals so as to help illegally bring a foreign national into the country.   Yeah, my favorite character was the bike cop.  He made the most sense.