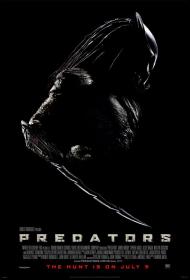 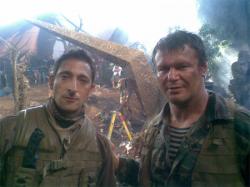 Predators is what a great action movie is supposed to be.  It starts in the middle of some action.  It presents some questions.  It introduces the characters and then they start to die.

The movie opens with an unconscious man in free fall.  He appears to be in some military clothes and is carrying a weapon.  He eventually gets the chute to open and he finds himself landing in a jungle.  He meets up with some other military types from all over the world.  Each prides themselves on being a badass.  There is one girl in the group.

Before long, they learn that they are being hunted by Predators.  This allows for plenty of action scenes and just enough gore.  My son liked the decapitations.   The ending leaves open a sequel, but I would have liked a better resolution.

Brody is not known for playing the action hero, but he does a good job.  Although he is in decent shape, he does not over do the part like someone from WWE would have.    Better to put a good actor in a action role than an action hero in a drama.

Grace has a funny scene with a guy who is wearing a prison jump suit.  He tells Grace what he would be doing at 5 o'clock if he were home.  I do not want to ruin it for you, but Grace decides to talk to someone else afterwards.

The story stays on the main characters.  The camera rarely leaves them.  This makes for a concise, very straight forward plot.  There are a couple of twists but it never emotionally engages the audience.   This is just a good old fashioned action film that entertains from start to finish.

I agree that this movie never emotionally engages the audience, but I seem to have a bigger problem with that then you did Eric.  Since I never really felt anything for these characters, I didn't really care if any of them died.  You never learn much about any of them beyond their name, nationality and profession.  And while some of them are soldiers, others are clearly cold blooded killers without any evident redeeming features, which makes it a bit hard to root that enthusiastically for them.

Brody does okay, but he still seems miscast.  Eric, you say, "Better to put a good actor in a action role than an action hero in a drama." and while I agree with that statement, I have to say that it would have been better to put an action hero in an action role.  Brody never makes that convincing of a bad ass, especially when you compare him to Schwarzenegger, who started the franchise all those years ago.  I mean when Brody strips his shirt off at the end, I laughed out loud, not because he was out of shape (he'd obviously worked out to get a buff, if lean body), but because it just seemed so incongruous to seem him of all people beating the shit out of a predator.

The action is good and they build to it well.  Some of the most tense scenes in the movie are before the action even starts when the group is wandering around the jungle trying to figure out what is going on and why they are there.

I too found the ending to be a bit of a letdown.  A good, solid, unambigous ending is another thing every good action movie needs.  The good guys should beat the bad guys and live happily ever after, or at least happily until the sequel.