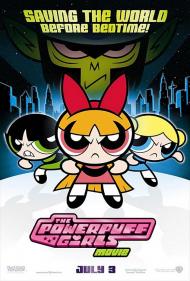 Have you ever noticed how every few years a cartoon comes along that captures the imagination of not only children, but certain grownups as well? Back in the 1980's you had Danger-mouse. During the 1990's you had The Rugrats. And currently you've got Spongebob Squarepants and The Powerpuff Girls; shows that are marketed at children, but also create a cult following amongst certain adults. A quick scan of the web will show you dozens of sites devoted to these shows created and maintained by people way past adolescence. There's even one, I kid you not, that calls itself The Church of Spongebob. The secret to shows that cross-over from simple cartoon to having a cult following, is the inclusion of jokes that work on two levels. One for the kids and one for adults. The Powerpuff Girls Movie does this perfectly.

For those unfamiliar with the show, it follows the adventures of three little girls who were created in the lab of Professor Utonium. He mixed sugar, spice, and everything nice together to create three little girls. During the process however, his lab monkey Jojo knocked a vial of Chemical X into the mix thus creating three little girls who also happen to have amazing super-powers. The monkey was also contaminated by the brew and thus their arch-nemesis, the hyper-intelligent simian, Mojo Jojo, was created at the same time.

The movie tries to be as new-viewer friendly as possible. Instead of a completely new story, it starts from the beginning and shows the girl's origin and their first adventure as super-heroes. Which works well for people who have never seen the show at all, or for people like me who have only seen it a few times. Die-hard fans, who know every moment of the show, might be disappointed.

My only problem with this quirky little cartoon was that it really only had enough story for about an hour, yet stretches out to nearly an hour and a half thanks to some padding. The 'Tag' scene, and Mojo Jojo's minions running amok both go on about 5 minutes too long, just to name two.

One quick side note; the voice of Mojo Jojo sounded so familiar to me during the movie, but I couldn't place it. After the movie I was surprised to discover that it's voiced by Roger Jackson, known to movie fans as the voice of the Ghost in the Scream Trilogy. "Hello, Bubbles. What's your favorite scary movie?"

Funny, light-hearted, with something for all ages, with a little trimming The Powerpuff Girls Movie could have been great.

The Powerpuff Girls are feminist superhero propaganda aimed at our children. Feminist have always pushed the notion that women can do everything men can, so here are superhero girls that regularly beat up a male monkey. Prof. Utopian, their male guardian, fills the feminine role here as the girls father/mother figure. He is submissive to the dominating stronger female stars.

This movie should have been cut to fit into a half hour. That way it could have been a regular episode of the TV series and I would not have had to watch and review it.

Bubbles, Blossom and Buttercup in The Powerpuff Girls Movie.

As this movie started I thought to myself, “I can't believe I'm watching The -fucking- Powerpuff Girls Movie!” If it weren't for the fact that my brothers had reviewed it I would never have watched it. But now having seen it, I must admit I was pleasantly surprised. I found it to be fast, funny and irreverent, with several cute homages to classic Hollywood.

It is also surprisingly violent. The havoc Blossom (red), Bubbles (blue) and Buttercup (green) wreak on the town during their game of tag is extensive. Cars are shown crashing into buildings and debris rains down from skyscrapers as the girls careen through them. This is one of the darkest and most destructive family cartoons I've ever seen.

And some of the language is questionable for kids too. At one point a megalomaniac baboon announces, “I, Baboon Kaboom, with my Baboon-bot, shall be the bomb, and if you don't like it, you can sniff my Baboon-bot bombs.” He then proceeds to shoot cannonballs out of his rear end while Mojo Jojo replies, “Oh, that's classy.”

One of the dastardly primates is based on Jimmy Durante. He has a huge schnoz and he sings a little jingle that goes, “My name is Hacha Chacha, and here is my spiel / A diabolical plan with lots of ap-peel / Spreading out bananas far and wide / And fixing up the folks for a slippery slide.” Later The Planet of the Apes is spoofed when Buttercup makes like Charlton Heston and says, “Get your hands off him, you darn dirty ape!” And of course the climax is a direct rip-off of King Kong.

There isn't much plot but there are lots of bright colors and quick edits. The Powerpuff Girls Movie is suited more for stoned college kids than for children. But I enjoyed it.