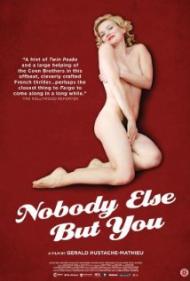 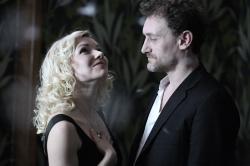 Sophie Quinton and Jean-Paul Rouve in Nobody Else But You

As someone who has reviewed thousands of films and watched even more, it is rare to get surprised by a movie. This is why I love watching foreign films. If you love old movies, how interesting does this sound? Nobody Else But You (originally Poupoupidou) tells the life story of Marilyn Monroe by way of a murder mystery in a small snow covered French town. I know, right?

While in the country on business, author David Rousseau drives past a dead body being put into an ambulance. Later in his hotel room, he learns that the body was that of a local celebrity, Candice Lecoeur, who police say killed herself.  She was the local news channel weather girl as well as the spokesperson for the town’s largest employer, a cheese manufacturer.

David visits her body in the morgue as well as the place where her body was found and concludes that her suicide was actually a murder.  He decides that her story will be the basis for his next book. He talks to the local police chief who is anything but forthcoming with information. A cover-up is clearly obvious.

He eventually receives help from a police officer, Bruno, whom David saw crying by the side of the road the day he passed Candice’s body being taken away. Bruno likewise suspects the truth is not being told and encourages David to investigate the murder. They develop a friendship that borders on the homoerotic. Bruno is gay while David seems sexually cold to Bruno as well as to the receptionist at his hotel who keeps throwing herself at him.

David breaks into Candice’s home and finds her diaries. Through his reading of her diaries we see her story in flashback, which paralleled that of a famous Hollywood sex symbol. If you know Marilyn Monroe’s life story you will be rewarded with many references. You, in fact, need to know of Monroe’s real life to get all the references and similarities. Some of the most obvious ones are that Candice married an athlete, had an affair with an intellectual and an affair with a regional President with the initials J.F.B.

It soon becomes apparent that someone wants David to stop snooping around as attempts are made on his life. Although a mystery, Nobody Else But You also has some humor. David’s inheritance is worth a smile as is his James Bond/Moneypenny conversation with his secretary.

The real treat though is seeing all of the re-enactments from Monroe’s life. One scene is a direct lift from a scene from The Misfits (1961). Later, a very sexy Candice sings Happy Birthday to the president at a public event. After her first night with him, she narrates, “That night, the president discovered he preferred blonds.”

I have a couple of miner complaints though. The first is that we twice have scenes of male full frontal nudity, yet Candice’s nudity is only implied. I thought this was a Hollywood trend to show more male nudes than female but I guess it is not limited to American films. The other is that several times in the movie someone explains to someone else the similarities of Candice’s life to Marilyn’s. I would have preferred that it just played out for the in-the-know audience instead of telegraphing it for the masses. After all, Marilyn Monroe fans are the ones who are truly going to appreciate all this film has to offer. 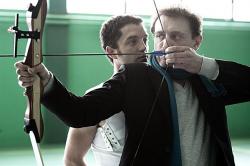 Guillaume Gouix teaches archery to Jean-Paul Rouve in Nobody Else But You.

Nobody Else But You starts off quite intriguing. The remote snowy village in France is a great setting for a murder mystery. Although reading white subtitles against snow-filled landscapes isn't the easiest thing to do. The characters are fairly interesting but as a detective story it falls flat. The guilty parties are obvious from the moment they are introduced. I did enjoy the many references to Marilyn's life and the quirky French sense of humor made me smile a few times.

Eric, welcome to my world. As a gay man, for years I've sat through movies where female tits and ass are on full display while the men are always covered up. How refreshing that this movie doesn't shy away from full frontal male nudity, although I did see a flash of breast and Candice's ass is on full display in several scenes.

Bruno's sexuality is treated fairly subtly, at least by Hollywood standards. If you aren't paying attention you may not even realize he's gay. It plays no direct part in the story, except that he is perhaps more willing to help David in his investigation than a straight police officer might be inclined to do. And he does insist on their getting together in secluded locations to talk about the case.

The movie goes so far as to suggest that Candice Lecoeur possesses the spirit of a reincarnated Marilyn Monroe. Like Marilyn she wasn't a true blond and her name was changed to make it sound more glamorous. Candice started life as plain old Martine Langevin just as Marilyn was originally Norma Jean Baker. As Eric wrote, there are many other parallels between the lives of these two women and they provide nice tidbits for fans of the legendary star.

Nobody Else But You reminded me a bit of the classic film noir Laura, where Dana Andrews falls in love with the portrait of a dead Gene Tierney, whose murder he is investigating. My problem with the story here is that we never really get to know Candice. She remains an ephemeral enigma even after we learn the details of her death. But then the real Marilyn Monroe has remained just as elusive over the decades so perhaps this was done intentionally by the filmmakers. At any rate this is an entertaining, if not completely satisfying, cinematic ode to Hollywood's greatest sex goddess. 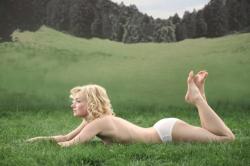 Sophie Quinton in Nobody Else But You.

I agree very strongly with Eric that the connection to Marilyn Monroe should have been left unspoken. Fans would recognize and understand what was being done while those who weren't in the know could still enjoy it as a mystery. By having Rousseau believe that Candice was a reincarnation of Marilyn prompts some lazy writing. He doesn't have a legitimate reason for suspecting the Regional President except that he knows this man parallels JFK. Given what a public spectacle Candice made at his birthday celebration and what a small town this is, it wouldn't have taken much real detective work to discover their relationship, but the writers couldn't even manage that.

I also think Patrick is correct when he says that perhaps it was the writer's intention that we never fully get to know Candice. I think that is absolutely the case and the reason that we don't know the true Marilyn is the reason she has remained such an icon. Rousseau sums up her appeal perfectly when he says that he has the feeling that if he'd known her, he could have saved her. That quality of vulnerability is the secret of Marilyn's and Candice's appeal. Heterosexual men react to her persona with a desire to protect and save her. Her stock, dumb blonde character with its physical sexuality, but innocence of mind reinforces this reaction. She's all woman, with a femininity that accentuates a man's masculinity. If we think of Candice or Marilyn as a fully defined, independent, adult woman, then she still remains physically attractive, but loses that elusive psychological attractiveness that was so much a part of her essence.

Bruno being gay is more than just story dressing. During the investigation, he is much more practical than Rousseau. He isn't as caught in the mystique of Candice, not being sexually attracted to her. It's why he and Rousseau make such a good team. Rousseau makes a leap guessing that Candice and JFB had an affair, while Bruno doubts it. Rousseau knows what JFB would have seen in her. Bruno though, is the one able to accomplish the details without getting caught up in the fantasy of Candice.

The setting, as Patrick said, is a good one. There's a claustrophobic feeling to this tiny snow covered village. The cast of characters is small and intimate. You just know that everyone knows every one else's business. The climate is virtually another character. The outside, real world, feels a million miles way.

I also agree with Patrick that the mystery isn't very strong. Because we know that Candice's life is mirroring Marilyn's, we can easily guess the culprits. This doesn't fatally damage the movie, but it does undercut the tension.

This is a nice idea, with a good cast, but it's one that isn't executed quite as well as it could have been.