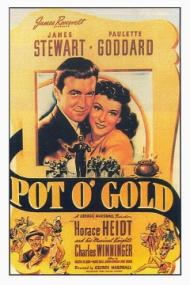 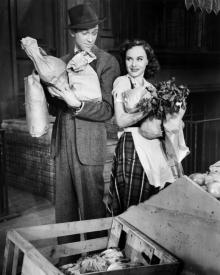 Pot o' Gold is a treasure of a find.  I had never heard of it before and was thrilled to find James Stewart and Paulette Goddard leading a cast of characters in this quick paced musical comedy.  There is not much of a plot, but at only 86 minutes it works well enough.

James owns a music store in some unspecified small town.  He sells records as well as teaches music.  His father used to own it and James takes great pride in it.  However, it is losing money and he is forced to move to a big city and work for his rich uncle Charles, who owns a health food manufacturing plant.

Upon arrival he meets Goddard, whose mother owns the building next to his Uncle's factory.  The proud musical Irish family has a band and a feud going on with James's uncle.   He wants to buy their building and is tired of their band practicing on the roof.  Without them knowing that he is related to Charles, he endears himself to the Irish family and moves in with them. James spends much of the rest of the film trying hard not to let them know who he is.

The songs are mostly all lively swing pieces.  I did not recognize any of them, but they are up tempo and never last too long.  I was surprised to hear Goddard sing.  She is not bad.  Stewart does a bit of singing on one song.

His singing may make this role unique, but Stewart is basically playing his stock character, that of the heart of middle America.  In fact, the first scene is straight out of It's a Wonderful Life, only with a music shop instead of a "building and loan".  James talks of choosing happiness over making lots of money.  Goddard is as gorgeous as she ever was.  She is too hot for Stewart, but he was often paired with women out of his range.

My favorite moment and one that differentiates James from George Bailey, is when Stewart is having a meeting that gets interrupted by his Uncle's lawyer.  Stewart invites the lawyer outside.  We hear a quick fight and Stewart reenters the office alone, "I'd like to make some other improvements as well."  A similar scene later is even funnier.

This film is not well remembered today, but it was made at a time when both Goddard and Stewart would have life changing events.  Goddard's marriage to Charles Chaplin ended in 1942.  Stewart was at the height of his early fame.  He had just won an Academy Award for The Philadelphia Story (1940).  He would appear in one more film in 1941 before joining the military, taking an absence from film until his return in 1946's It's a Wonderful Life.

Do you hear music?

I agree wholeheartedly with Eric on this one. Pot o' Gold is a delightful movie find. It's lighthearted, silly and fast paced. Sure the plot is corny and extremely simple but it left me smiling. The musical numbers are time capsules to the big band swing era. They include such forgotten chestnuts as "Hi, Cy, What's A-Cookin'?", "When Johnny Toots His Horn", and "A Knife, a Fork and a Spoon". If you're under 80 it's quite likely you've never heard of any of these songs.

The cast is charming, with Stewart and Goddard making a nice little romantic couple while Charles Winninger and Mary Gordon provide most of the laughs as the two feuding neighbors. Winninger shines in the scene where the band convinces him he's going mad (see photo). I won't spoil the details but it's an amusing bit of celluloid. Gordon is great as the feisty and very Irish Ma McCorkle.

A quick online search revealed an interesting tidbit about this film. It was based on an actual radio program called “Pot o' Gold” that ran on NBC radio from September 26, 1939 to December 23, 1941.  Art Carney of television's Honeymooners' fame was the announcer for a while and he made his movie debut here as a band member/radio announcer.

Just as in the movie they gave away $1,000 dollars each week to anyone that answered the phone when the host called. The phone numbers were selected in the same manner as in the movie with three spins on a wheel. The first spin to determine which phone book to use, the second spin for the page number and the final spin for which line on the page. The series ended a few weeks after the attack on Pearl Harbor. America was no longer in the mood for such lighthearted triviality.

Pot o' Gold is a nearly forgotten musical comedy made at the very end of America's pre-WWII innocence. The world would never be the same again and neither would Hollywood. For 86 wonderful minutes this movie provides a magical transport back to that more carefree, pre-atomic age. Back when a movie plot could revolve around someone throwing a tomato and hitting another character in the kisser with it. 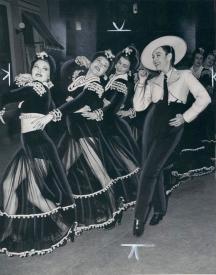 Paulette Goddard as a crossdressing caballero in one of the musical numbers from Pot o' Gold.

Don't let my brothers' gushing enthusiasm oversell this movie. It's not quite as much of a delightful treasure as they claim. At best it's an occasionally, mildly amusing, little movie that would long be forgotten were it not for the presence of Goddard and Stewart. It's merely a footnote in both of their careers and Stewart himself once referred to it as the worst movie he ever made.

I do agree with Patrick that Mary Gordon is great as Mom McCorkle. In fact, her scenes at the beginning are some of the funniest and best in the whole movie. From Stewart's arrival in the neighborhood, until he's sprung from jail, the story is quite lively and amusing thanks to Mom and the other local denizens. This being the 1940s, naturally all of the policemen are Irish and so Mom seems to know everyone from the beat cop up to the judge.

After that nice opening setup though, the story seems to meander and jump around, seemingly there to simply provide an excuse to insert some songs. While there aren't any classics in the musical numbers, some of them are catchy. It's songs like these that Woody Allen was celebrating in Radio Days.

I actually found reading about the movie more entertaining than watching it. It was produced by James Roosevelt, the oldest son of then President Franklin Delano Roosevelt. Any reluctance Louis B. Mayer had about loaning Stewart to United Artists was smoothed away by the thought of getting in good with the Roosevelt family. It would end up being the first and last film produced by James, as he would shortly join the war effort before entering politics like his father.

Studio publicists of the time reportedly tried to generate rumors of a romance between Stewart and Goddard, but in truth they didn't get along. Goddard thought Stewart was too boyish and she dismissed his acting ability by saying, “anyone can swallow.” Stewart in turn, went on to say that Goddard hd to fall back on a wisecracking tone to get by. It may have been his relationship with his co-star that lead to the remark about this being his worst movie. To the credit of both the stars though, their acrimony never shows up onscreen, except maybe when Goddard wakes Stewart up on the stairs by pushing his head, did I detect a little bit more of a push than was needed?

The real novelty in the film is of course hearing Stewart sing, even if it is only briefly. It's only the second time he ever sang on film after MGM's Born to Dance in 1936, which he would poke fun of in That's Entertainment. Without that moment, this movie would probably go from nearly forgotten to completely forgotten. I know that even with it, I'm already starting to forget it.