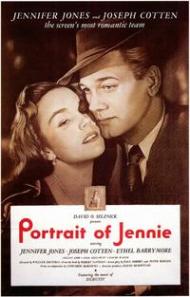 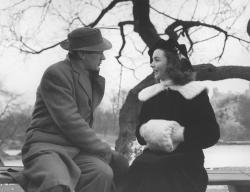 Joseph Cotten and Jennifer Jones in Portrait of Jennie.

Portrait of Jennie is one of those movies that it is better not to know much about before seeing. Set in Manhattan in 1934, the gist of the plot is that an aspiring artist, played by Joseph Cotten, meets a strange young girl (Jennifer Jones) in Central Park. She dresses and talks like it is 1910. He runs into her sporadically over the next several months and every time they meet she has aged several years. Where the story goes from there I won't give away, obviously it involves his painting her portrait.

The black and white cinematography is quite impressive as is the supporting cast, which includes Ethel Barrymore, Cecil Kellaway and Lillian Gish.

With a run time of less than 90 minutes this is another great example of the superior pacing and editing of movies from the classic era. No scenes are superfluous, no dialogue extraneous. Modern directors could learn much from the example set by these old movies.

Like the similarly titled The Picture of Dorian Gray, which was released a few years before this movie, the only scene in color is the final shot of the title portrait. Both movies were adapted from novels and both deal with unexplainable phenomena surrounding a painting. They make nice movie book ends.

Portrait of Jennie is hauntingly romantic and highly sentimental. I'm a sucker for that style if it is done well. This one is.