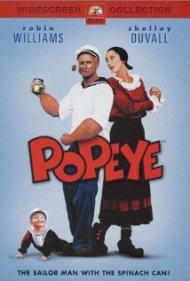 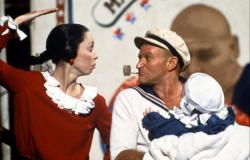 This movie begins with Popeye arriving at the seaside town of Sweethaven. He meets the characters from the cartoon. This includes hamburger loving Wimpy, the skinny Olive Oyl, her family, baby Sweetpea and his arch enemy, Bluto. Popeye also finds his long-lost father, Poopdeck Pappy. Popeye and Bluto are at odds but Bluto gets the best of Popeye as Popeye refuses to eat spinach. Bluto asks, “So you don't like spinach?” and Popeye responds, “I hates it.”

Popeye gets into several scrapes throughout the film but he does not eat his spinach until the very end of the movie, at the insistence of his father. Poopdeck Pappy, “Eat that spinach.” Popeye, “I don't wanna eat that spinach.” If you have ever seen a Popeye cartoon, you know how it goes. Bluto causes some problems that usually involve abducting Olive Oyl or Sweetpea, causing Popeye to eat his spinach and save the day. That plot works in a 10 minute cartoon but is hardly enough to sustain a two hour film. Instead of waiting a few minutes for him to turn into a superhero, we have to wait nearly the entire film, and when he finally does it is over in a minute. His motto is, “He's strong to the finish 'cause he eats his spinach!” but here a more accurate description is, he’s only strong at the finish.

The film makers were dedicated in making this movie true to the cartoon. This is evident in how the actors speak. Shelley Duvall has Olive Oyl’s frustrated, “Ooooh”s down pat, while Williams spends the entire film mumbling such lines as, “Another thing I got is a sensk of humiligration. Now, maybe you swabs can pool your intelligensk and sees that I'm axking you for an apologeky.” It is sometimes hard to tell what is being said.

Unlike the cartoon, this is a musical. None of the songs are that catchy or worth adding to your Ipod. You may remember the peppy, “I Yam What I Yam” sung by Williams and “He Needs Me” sung by Duvall, but only because the chorus is repeated many times.

Popeye is a harmless family film, but it is also pretty much a bore. My son and I waited for Popeye to eat his spinach and go all WWE on Bluto, but we had to sit through the whole film to get to that point and then it was over almost as it began. Mark this one as a mildly fascinating, however minor, footnote in Robin Williams acting career.