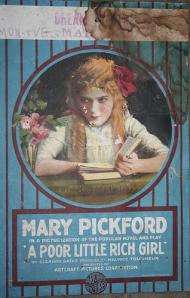 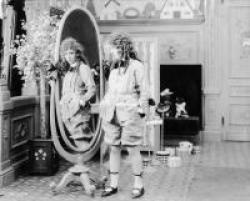 Mary Pickford had been an international star for about 5 years when she made The Poor Little Rich Girl in 1917. This marked the first time that Mary played an actual child as opposed to a teenaged girl or young woman. Pickford was 24 playing a 10/11 year old. This movie was a huge success and audiences couldn’t get enough of Mary as a precocious youngster, she would be typecast as such for the rest of her career and even today is best remembered as the little girl with the golden curls.

Pickford is Gwendolyn. She lives in a fancy Manhattan mansion with her parents and a platoon of servants. Her father is busy making money in the stock market and her mother is obsessed with her position in high society. This makes for a very lonely little girl. Even the servants are brusque and unpleasant with her. Gwendolyn longs to join in playing with the children she watches from the safety of her nursery window.

The climax of the movie takes place on little Gwendolyn’s 11th birthday. Her parents are giving a lavish dinner party but the poor little rich girl is sent off to bed. When one of the servants mistakenly gives Gwen an overdose of sleeping medicine she becomes dangerously delirious. Her parents eventually realize what is truly important.

The illusion of Pickford as a child is enhanced by the use of oversized props and the hiring of tall actors in the adult roles. But it is Mary’s ability as an actress that sells it. You will forget she is an adult so perfectly does she embody the physical mannerisms and innocent facial expressions of childhood.

The direction by Maurice Tourneur is quite good from a story by the prolific screenwriter Frances Marion. The action includes Mary getting into a mud fight with some local urchins as well as a humorous disagreement with the daughter of one of her mother’s society friends. It is interesting to note that all the other children in the movie are played by actual children yet Mary never stands out from them. The highlight comes when Mary is under sedation. This section of the movie is surreal and full of imaginative whimsy.

The Poor Little Rich Girl was filmed at the Biograph Studios in Fort Lee, New Jersey. There is an exterior scene where Mary gets taken for a drive by the family chauffer along Riverside Drive in Manhattan. Watching this movie I realized just how much Shirley Temple copied Mary Pickford, most noticeably in her facial expressions, especially when she is pouting. Temple would even remake this movie in 1936, although the plot was changed and songs were added. 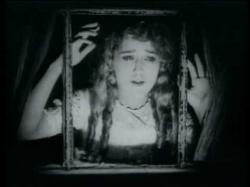 Although it is just over an hour in length, Poor Little Rich Girl drags on twice as long as it needed to. Gwen is financially spoiled yet emotionally deprived of love and affection. Her illness awakens her parents to her needs. The end.

Patrick praised Pickford's ability to seem like a 10/11 year old, while I was not convinced. To me she came across as a mentally challenged teenager. This is best exemplified when talking to and fighting with the girl sent to keep her company, who brags about how much richer her family is than Pickford's. Ten year olds move in a slightly awkward manner while Pickford's posture and movement is clearly that of an adult.

Every second of this film is intended to make us feel sorry for Gwendolyn. From her mean servants to her neglectful parents, this film strains to get you to pity her. I found it all to be sentimental sewage. I nearly gagged when Pickford drops to her knees, leans on her dad's lap and begs him, "Daddy! Haven't you time to love me a little?" In her state of delirium the plumber tells her, "You think you have everything. In fact, you have nothing at all." This film is anything but subtle.

Pickford was a legend and simple roles like this made her famous. Actresses like Gloria Swanson played women with mature marital problems such as in Don't Change Your Husband (1919), while Pickford was doing such cut and dry, accessible films as this. There is no  room for debate over who is right and who is wrong in this film. This meager plot is spoon fed to us every single scene. We see over and over what is wrong with this sweet little girl and know instantly what she needs.

Other than noting that Pickford was an adult playing a child, there is very little interesting about any of this. 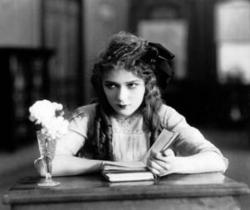 Like Patrick, I enjoyed this film. Yes, it's very simple and overly sentimental, but that doesn't detract from the enjoyment of it. In some ways it makes it funnier. Eric, gagged at the "Haven't you time to love me a little?" line, but I laughed at it. It's so over-the-top that it almost seems like a parody. And pointing out silly lines, let's not forget, "Why do my tomorrows, never come?"

Pickford may not play a small child 100% accurately, but more importantly, she's able to make the audience accept that she is one. When the movie started I was fully aware that this was Mary Pickford, adult movie star, and I was paying attention to how she moved and imitated a child, but as the movie progressed I started doing that less and less, forgetting for long stretches that she wasn't a child. I do think though that her age seems a bit inconsistent. At times she seems to be mentally closer to a six year old than a ten year old.

It's easy to see why this movie would be remade in1936. It's theme of money doesn't buy happiness probably resonated even stronger with depression era audiences. Although personally, I was reminded of the old saying, "Money may not buy happiness, but I'd rather cry in a Porsche than on a bus."

The dream sequence, when the Poor Little Rich Girl is delirious from the poison, reminded me a bit of The Wizard of Oz. A girl is on a journey in a strange and magical land, with talking animals and strange creatures, each of who is played by or representative of someone she knows in real life. Although in this story, it's not she who learns a lesson, but her parents.

Yes, this movie is simple, but that's what it wants to be. It was obviously a movie aimed at the family and children. It's a lighthearted, often silly, comical little movie. I can't say I'd want to watch it again, or see a string of Pickford films in a row with her performing the same schtick, but it was amusing enough once.