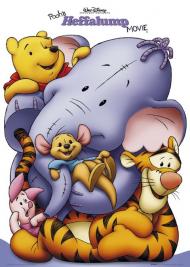 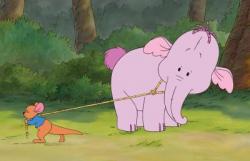 Pooh's Heffalump Movie is a cute little cartoon that ought to please very young children, and at just one hour and ten minutes, doesn't run long enough for adults to get bored.

Unlike most Winnie the Pooh adventures, this one pushes its title character into a supporting role so that it can focus on the little Kangaroo, aptly named Roo, and the friendship he builds with the young Heffalump; Lumpy. So much so in fact, that the title is fairly misleading; it should have been Roo's Heffalump Movie.

The story opens with a mysterious trumpeting sound echoing through the hundred-acre wood. Upon investigation, the inhabitants decide that is a Heffalump and, on Roo's urging, decide to try to catch one, despite Rabbit's warning that to do so would be, "Fraught with danger." And as Tigger points out, "You just can't argue with a word like Fraught."

Roo, frustrated at being left out of the expedition because he's too young, heads off on his own and soon locates a very young Heffalump named Lumpy, who turns out to be a purple and cuddly elephant. While Pooh, Piglet, and company continue their expedition and get horribly lost (mainly because Pooh has been eating the pink jellybeans that Piglet leaves as a trail), Roo and Lumpy become best friends and wreck playful havoc on the hundred-acre wood.

Not so subtly buried in the plot is the message that just because someone is different from you doesn't mean that you have to be afraid. Thankfully, it's delivered in such a way that it never gets preachy, but simply provides a moral to the story.

The movie also contains a few songs by Carly Simon, but they merely serve to pad the movie out by a few minutes. They're neither catchy nor memorable. Neither, however, are they annoying and they're quickly over.

Pooh's Heffalump Movie is rated G, which is rare these days, even for a cartoon, but fitting since this is clearly a cartoon aiming for the very young. 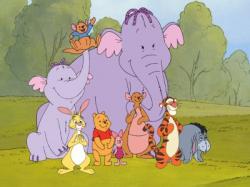 Movie's do not get more cute and innocent than Pooh's Heffalump Movie. A bunch of cuddly characters, with very small IQ's, venture over symbolic fences and ravines to meet and befriend creatures whose only difference is that they have British accents. Of course the moral of the story is that Heffalumps are just like the residences of the hundred acre wood. It is a very nice moral message about judging to quickly.

I could very easily write about political messages hidden in the fabric of this story. Since this movie is aimed at young children, who do not understand politics, I will not bother. I will just note and add Pooh's Heffalump Movie to my ever growing list of Disney films that disregard the traditional family unit. Kanga is a single mom and, apparently, so is Lumpy's mother.