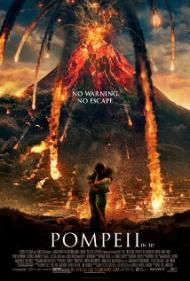 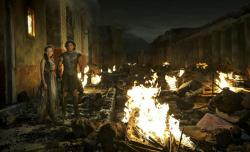 My biggest regret from having lived in Italy is that I never visited the ruins of Pompeii. It must feel like traveling through time to walk the streets of that ancient city. I looked forward to this film as a glimpse into the past but unfortunately, the writers had no clue how to generate any interest whatsoever.

These writers came up with a plot that is half Gladiator, one quarter Titanic and one quarter Horse Whisperer. Kit Harington plays Milo, a British slave made into a gladiator. He is taken to Pompeii where, on the road, he meets the daughter of the town’s wealthiest family. She is returning home from Rome. They barely spend any time together but decide they are madly in love.

In Pompeii, Milo just happens to run into the Roman who led the raid on his village in England. In an even greater coincidence, that same Roman also has the hots for the girl Milo likes. They dated in Rome until she realized what a douche bag he is and ran back to her parent’s home in Pompeii.

Milo spends more time talking with his cell mate than he does with his lady love. The Roman and the girl’s father are meanwhile working on a possible business venture. I was so damned bored. Finally, all the principle characters gather in the arena for a fight but get interrupted when Vesuvius blows.

Kit Harington went all out exercising to get into shape for this role. He succeeded in that he shows off his abs but it did nothing for his acting. His expression never changes the entire film. I could not tell what this guy was thinking or feeling at any point in the film.

Pompeii offered the slightest glimpse into a time long gone but the story is so bad that all interest quickly evaporated. While the town is being pummeled by rocks, pumice, ash and fireballs we are supposed to care if Milo makes it out alive but I did not. He is so dull and underdeveloped that it mattered not what happened to him or anyone else on screen.

Can someone out there please explain to me how a piss poor written film like this gets made while the novel “Pompeii,” written by Robert Harris (2003), got stuck in film development? Let me put it this way. Harris wrote “Fatherland” and “Enigma,” while the writers of this film wrote Batman Forever (1995). Need I say more?