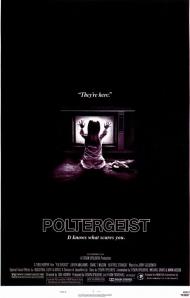 They are here alright!

It is always interesting to re-watch a movie that you haven’t seen in many years. Some movies hold up reasonably well, some are nearly unwatchable and some actually seem to improve with age. Poltergeist belongs in the latter category. This psychological horror film seems better than ever. I just read Scott’s review of Paranormal Activity, in which the characters behave in a ridiculous manner; by comparison the actions and motives in this movie seem natural and organic. The members of this family behave very realistically given the unbelievable situation they are facing.

The Freeling’s are your normal suburban family, father, mother, son and two daughters. Shortly after moving in to a home in a new housing development in California, strange events begin happening. At first they are fairly harmless, such as kitchen chairs rearranging themselves. Soon, however, things turn downright horrifying. When their youngest daughter, Carol Anne, disappears inside the house into some portal to a ghostly dimension, the Freeling’s bring in some professional ghost busters. All of which leads to an entirely satisfying conclusion.

This horror movie belongs to the women in the cast, particularly JoBeth Williams as the mom, bravely determined to get her daughter back at any cost. Two of her scenes stand out. The first is her giddy reaction to the chair sliding across the kitchen floor and the other is the scene where she feels her daughter’s presence pass through her. It is brilliantly acted. Beatrice Straight is great as the woman sent to investigate the paranormal activity. She is quickly in over her head. Zelda Rubenstein is also memorable as the clairvoyant Tangina. She has an interesting look and unique speaking voice. She delivers lines like, “There is no death. It is only a transition to a different sphere of consciousness.” and of course her most famous, not to mention false, statement, “This house is clean.” Right before all hell breaks loose. The most famous line from the movie is spoken by another female character, the child Carol Anne, “They’re here.” It is one of the simplest yet eeriest lines from any movie.

The special effects hold up well. The only scene that now seems overcooked is when the tree comes to life and attacks the son. It is so over-the-top that it doesn’t gel with the rest of the movie which contains some truly frightening images. The evil looking clown doll being the scariest in my opinion. If, like me, you haven’t seen this movie in years, or if you’ve never seen it, then make this your movie pick this Halloween. 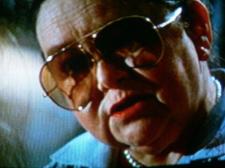 Zelda Rubinstein made me laugh every time she opened her mouth.

I'd never seen this movie before. The only thing I knew about it was the little girl touching the television screen and her saying, "They're here." Watching it now, especially after your rave review Patrick, I have to say I was rather disappointed in it. Instead of being scary I found it to be more of a comedy and not always intentionally.

For starters, it's very, very dated. Like the 1980s in general, this movie is loud and brightly lit, which isn't what I expect in what I thought was supposed to be a supernatural thriller. The attitudes and actions of the characters are also dated. You won't see parents in movies today smoking pot or laughing off workmen ogling their teenage daughter. Also seeing a television station actually go off the air late at night took me back to my childhood. I guess these spirits would be in trouble today since TV stations are on 24-hours a day. The attitudes don't hurt the movie, I just found them interesting.

This isn't a subtle movie. Maybe for the first ten minutes or so when the characters are being introduced and the girl first touches the television set and the creepy clown you mention Patrick, but then it goes from zero to sixty the second that incredibly fake looking tree busts in through the window and grabs the son. From that moment on there's very little suspense or mystery; everything is just hung out there in the open. Even the big reveal at the end of the movie as to why all these things are happening is the most obvious over-used cliché in horror. In fact, when they first say what's causing it, I actually laughed.

Some of the special effects hold up Patrick, but not all of them. The tree is phony as hell and the face ripping scene over the sink is laughable. Some of the other things though are quite well done, especially considering the state of special effects when this was made.

Little Zelda Rubenstein is so over-the-top she made me laugh out loud every time she said anything. I much prefer Beatrice Straight's character and her team of paranormal experts.

There are some genuinely funny scenes such as when one of the "ghostbusters" mentions how he once filmed a Matchbox car move a few feet over 7 hours, just before he is shown the haunted room in the Freeling house where everything is moving. The very, very final scene in the movie is also chuckle-worthy.

You are correct Patrick that this movie shows characters behaving much more realistically than Paranormal Activity does, but that movie at least featured some suspense, which this one lacks. If you could somehow merge those two movies together, you just might have something, but as it is, neither one of them is what I would call a classic. 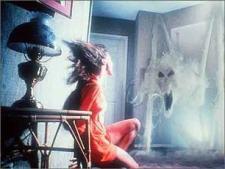 If she had smoked more weed, she may have found this funny instead of scary.

Hauntings have been done to death in films. Special effects have far surpassed what is shown here. Poltergeist now seems quaint. What I found most fascinating was the mom and dad's easy going parenting style. It is the most unique aspect of this film.

The parent’s smoke pot early in the movie and it puts them in a state of giddiness. Later they are so stressed they can barely sleep. I wonder why they didn't smoke some more then? The mom's reaction to the workmen flirting obnoxiously with her 16-year-old daughter is odd. She has a look of pride as her daughter flips the men off. What parent would continue to employ middle-aged men that came onto their underage daughter? Just how much pot has she smoked?

At one point the Mom tells the teenage daughter to have her boyfriend get her home by a certain time because the family is going to stay at a particular Holiday Inn. The daughter smiles knowingly and says to herself, "I remember that place." The Mom asks surprisingly, "What?" But never pushes the issue. I guess the parents should smoke less pot and pay more attention to what their daughter's doing.

During the pot smoking scene, the dad is reading a book about Ronald Reagan. What does this say about him? He smokes pot with his kids in the next room, but reads about a conservative. Perhaps it is saying that he is between stages in his life. He still likes to act irresponsible, yet has to pay taxes. He misses his carefree college parties, yet has to now concern himself with a mortgage. This scene would never appear in a film today. Not because we live in a prudish time, but because it now makes the parents look stupid.