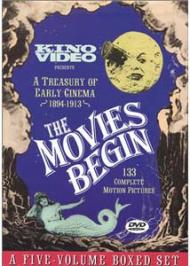 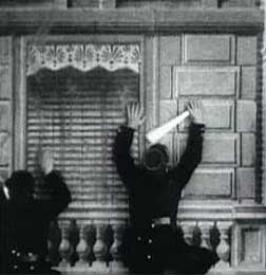 A simple bit of trick photography.

French director Ferdinand Zecca’s The Policemen’s Little Run is a very early example of slapstick comedy and predates Sennett’s Keystone Kops by 6 years. It begins with a dog running from a butcher shop with what looks like a leg of lamb in his mouth. About a dozen policemen immediately give chase.

They follow the dog through the picturesque streets of Paris, into a small basement window, back outside and then (in a rather effective special effect) they follow the dog up the side of a building. You can tell it is just a painting on the ground, shot from above, the dog and men are crawling along, but nonetheless it works quite well.

Next they pursue the dog through an open bedroom window where a man is sleeping. The policemen all jump right on top of the man’s bed, waking him up. The last policeman even knocks the bedside table over. The man simply jumps out the window.

Finally the policemen corner the dog in his dog house. Now, however, the mutt becomes fierce and begins chasing them. The movie ends with all the police rushing inside their station and slamming the door. The final shot is a close-up of the dog with his mutton prize in his mouth and a policeman’s hat on his head.

These incredibly silly and inept police are strikingly similar to the Keystone Kops. Although like any good American entrepreneur Mack Sennett expanded the idea, turning his Keystone Kops into an institution and making lots of money in the process. 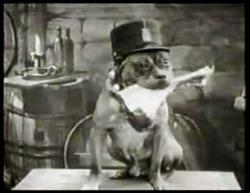 The dog has to be German the way the French retreat from it.

My god they had tough laws in those days.  Just think how many police would have been chasing that dog if he'd murdered someone?  From the way the French police end up running from the dog, I can only guess that the dog is German, because we all know how the French love to run from the Germans.

The climbing the side of the building scene is one of the best bits in this short, but they overdo it by repeating the gag when the cops climb back down it.  It seems more convincing the first time and the "actors" really gave it their all.

It is the scenes of 1907 Paris that fascinated me the most though.  I've said before that these old movies are like a window into the past and this is certainly the case with this movie when we see a Paris before two World Wars.  You only catch glimpses of the city, but they are tantalizing glimpses.

Although the sight of all these police chasing after a dog is a silly one, apart from the climbing the wall sight gag, there's not a lot to this little short.  Even at just five minutes the joke gets stale.  Most of the time while I watching I was hoping the camera would stop and pan around the city more.  That's the real interest this movie still hold. 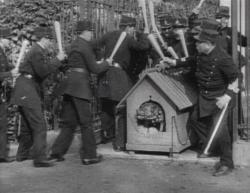 As Patrick wrote, this clearly influenced the Keystone Kops, and any number of comic shorts where a bunch of policemen chase someone.  See Buster Keaton's Cops (1922) for the best and greatest silent film police chase.

It also is one of the first examples of another silent film comedy staple, the dog chase.  Again referring to Keaton, he and partner Roscoe "Fatty" Arbuckle often featured Arbuckle's dog, Luke, in their comic shorts.  He was always chasing one of them.  Another example is Harold Lloyds' Number Please (1920) in which he gets chased by some policemen, and a dog.