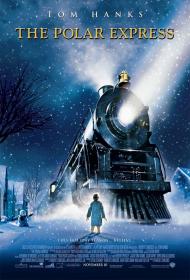 The Polar Express is the best Christmas movie since 1983's A Christmas Story. It manages to recapture the spirit of mystery, wonder and awe that children find in the holiday and that most adults lose as they grow older, more skeptical and more cynical.

As the story opens, a young, unnamed boy is trying to fall asleep on Christmas Eve in Grand Rapids, Michigan. He's reached the age where he's beginning to doubt the existence of Santa Claus. Just as he's drifting off to sleep, the sound of a train steaming down his street brings him sharply awake. Running out to see what it is, the conductor (Tom Hanks, who does all of the adult male voices in the film) of the train tells him that this is The Polar Express, on its way to the North Pole. Unsure and skeptical, the boy hesitates to get on the train, but jumps aboard at the last minute. On board the train are other children, all around the same age.

The majority of the story shows the journey of the train and the adventures it goes through on its way. At times becoming a roller coaster out of control and at other quieter times, there are elements of a ghost story. It is also on the ride where I felt the one tiny sour note appeared in the whole movie when two of the young children burst into a sweet, but out of place Christmas song. Not that it spoils the movie at all, but it doesn't fit with the rest of the story. It almost feels like the filmmakers just felt they needed to throw a song in the movie somewhere.

Using a combination of performance capture and CGI, the creators of this movie have created animation that is beautiful to behold. It's true that the facial expressions of the characters aren't as detailed as they should be; this seems especially true of the lead girl character. However, the backgrounds and props are completely reminiscent of an illustrated children's book. And the city at the North Pole, with its combination of European architecture and retro-science fiction, is almost exactly how I always imagined it would look.

Being an adult who finds it increasingly difficult to feel the Christmas spirit each year, I found this movie to be quite touching, particularly in Tom Hanks final narration at the end of the film. If you can't feel at least a spark of the old childhood Christmas magic by the end of The Polar Express, you probably never will. 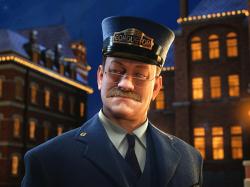 It was a bittersweet experience watching this movie with my two sons. My 10 year old is having a hard time hearing Christmas bells. That is to say, he highly doubts the existence of Santa Claus. He did not overly enjoy this film. My 8 year old, however, hears those Christmas bells loud and clear. He was holding my hand very tightly during the scene where Santa walks up behind the boy and says; "What did you say?"

The Polar Express is a short children's story so some filler is evident on screen. The song Scott felt was out of place is short and not that bothersome. I felt the extensive ticket flying in the wind scene to be a bigger sidetrack than the Christmas song.

This film is about believing in Santa and the magic that seems to actually happen on this holiday. This movie is about the loss of the mysterious wonders that Christmas suggests. The Polar Express will remind adults about how they felt as children at Christmas. It may help even the biggest Scrooge to hear a Christmas bell ring.

Our Aunt gave this book to my youngest son for Christmas and she wrote on the inside cover, "May you always hear the bells of Christmas." My sentiments exactly.

I've now reached the age where it's more than likely that I've seen at least half of all the Christmas Days that I will see. And yet, like the narrator of this movie, I am still able to feel the Christmas spirit. I still believe. In fact there are times when I fear that I am destined to become a sentimental old fool.

Like my brothers I loved this movie. If I were 8 years old, in fact, I think it would become my new favorite movie. It is truly beautiful to watch. As for the two minor criticisms that Scott and Eric mentioned, about the children's song on the train and the train ticket soaring on the wind, I disagree. I didn't feel that either one slowed down the story significantly. The song was short and sweet and the ticket scene was visually stunning.

I liked the inclusion of several Holiday standards. Bing Crosby and Frank Sinatra can both be heard singing their most famous Christmas recordings, 'White Christmas' and 'Here Comes Santa Clause'.

Perhaps it is just my age and background but this movie visually captures the essence, wonder, and mystery of Christmas like no other that I have seen. I agree wholeheartedly with my youngest nephew's opinion of The Polar Express and I am sure that my older nephew, although now he is growing up as everyone must, will recapture the ability to hear those Christmas bells. Maybe this movie will even help him do that.