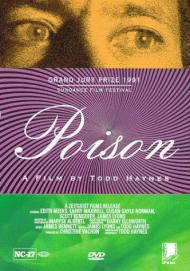 Poison marked the feature film debut of writer/director Todd Haynes (Safe, Velvet Goldmine, Far From Heaven, I’m Not There.). It caused quite a stir upon its release in 1991 winning awards at film festivals around the globe while being blasted as obscene by right wing watchdog groups here in America. Today it is revered as a seminal film in the history of Queer Cinema.

It features 3 separate stories told in an intertwining manner. They are titled “Hero”, “Homo” and “Horror”. The stories are each filmed in a different style and on the surface seem unrelated. They all deal with a central figure that is an outsider due to his perceived transgressions by society and the AIDS crisis is clearly the inspiration for the “Horror” section.

The most ambitious is “Homo” a homoerotic prison fantasy based on the writings of Jean Genet. It tells of two prisoners who begin a relationship interspersed with flashbacks of them as adolescents in a reformatory. This is also the section of the movie that caused the greatest uproar as it features male on male rape and a brief glimpse of an erect penis. A young John Leguizamo has a scene as a fellow prisoner although he was listed in the credits as Damien Garcia due to an unspecified SAG rules problem.

“Horror” is shot in black & white with noir like shadows and angles. It is essentially an homage to those low budget sci/fi movies of the 1950s with its stilted dialogue and purposely bad acting. It’s about a scientist that isolates the human sex drive in liquid form and then accidentally ingests it after setting it down next to his coffee cup and being distracted by a female scientist. His face grows disfiguring pustules that are contagious and he commits a murder. He gets labeled a “leper sex fiend” and is soon being hunted down like Frankenstein’s Monster.

The third story, “Hero”, is shot like a television news show. It features interviews with people that knew a 7-year-old boy who shot his father and then – according to his mother’s eyewitness account – flew out of the second floor window of their house and disappeared from sight, never to be seen again.

Normally I dislike movies that place “art” or “a message” over entertainment. Poison is that rare exception. It is definitely avant-garde yet it also tells three distinct and coherent stories. It is disturbing, thought-provoking, intriguing and highly original.

Poison garnered far more public attention than it would otherwise have gotten when the Rev. Donald Wildmon of the Mississippi-based American Family Association – after reading a review of the movie in Variety in which it was mentioned that Poison had received $25,000 dollars from the National Endowment for the Arts – wrote a letter to congress denouncing the film and attacking the NEA. Jesse Helms then attacked the film on the Senate floor. Neither man had even bothered to watch the movie.

Dan Rather led off the CBS Evening News on Monday, April 1, 1991 with a story about the growing controversy over Poison. Todd Haynes debated Dick Armey on CNN’s Larry King Live and the Christian Coalition’s Ralph Reed on The Today Show. Poison broke the opening week record at the Angelika Theater in New York City, taking in $41,000 during the week of April 5th, 1991 and eventually grossing nearly a million dollars. There is nothing like a good controversy to sell tickets.

No matter how you look at it, Poison is an audacious movie debut. Its central theme is best summed up in a quote by Jean Genet that is shown onscreen, “A man must dream for a long time to act with grandeur, and dreaming is nursed in darkness.” 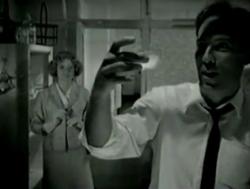 The fact that Poison received $25,000 dollars from the National Endowment for the Arts is a legitimate reason for anyone to complain about it if they so wish.  The NEA is a government organization that takes tax paying American's money and gives it to artists.   Just like objecting to how our government spends money on defense, research and infrastructure, Jesse Helms and any other tax payer has the right to attack the film whether they have seen it or not.  Their money helped fund it after all.

"Hero" is one of those obnoxious little stories where symbolism is treated as reality.  Through interviews with family, neighbors, friends and teachers we learn that this kid was abused and one day snapped.  He is never shown.  Did he fly away?  The movie never makes that clear as the point was just that he had enough and left.

Thanks to a conservative reaction to this film, Poison became something it never would have otherwise, remembered.   Each story is about an outsider who struggles with not being able to fit into their society.  There was some thought and ideas put into it but nothing so great as to earn it any notable recognition.  Sure it may have been brave to make it at the time, but it was also brave for George Lucas to make the new Star Wars movies and I have no interest in rewatching them either.