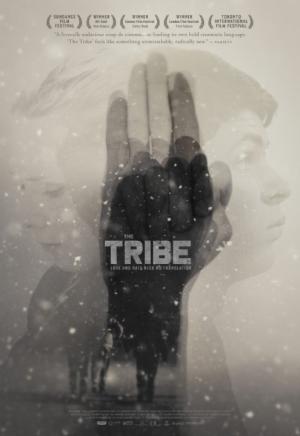 Yana Novikova and Hryhoriy Fesenko in The Tribe

The Tribe (Plemya) is an original piece of work from Ukraine that some have called a masterpiece and others a piece of garbage. It thrives on gimmicks and contains some shocking moments. The gimmick is that the entire movie is done in sign language. There is not a single discernible word spoken in the entire movie. Not only that, there are only subtitles for sounds being made. The Tribe is a film about and for the deaf.

It begins, ordinarily enough, with a new boy arriving at a run down boarding school for the deaf. All of the staff and students sign to each other. We are never told his name but the credits list him as Sergei. He almost immediately gets tested by the boys controlling the school. This means he gets picked on and then beat up in a hazing initiation. Before you know it, he is a member of this gang of boys and two girls who rob and beat up innocent people for fun. The boys also pimp out the two girls at night at truck stops to horny drivers.

One night, the boy who escorts the girls to the truck stop gets killed and Sergei then becomes the new man to knock on the truckers windows and show them the card with an offer. After one such night of work, he pays one of the prostitute students some money to take his virginity. He falls in love with her as fast as he orgasms. This creates problems for him as he is still expected to pimp her out at night. Further problems arrive for Sergei when he learns that his "lady" has problems and plans of her own. This all leads to a very violent, oh no he didn't, ending.

Now you may agree that what I just described is a decent enough of a plot. However, Myroslav Slaboshpytskyi, who also wrote the script, likes to linger on every scene to exhaustion. Someone just doesn't arrive at a place, Slaboshpytskyi shows us the van pulling up, someone getting out, closing the door, walking to the building, knocking, opening it up, walking inside, walking upstairs opening another door and so on, all in one take. Yeah, Slaboshpytskyi likes really long takes without a single edit. Often it creates a horribly boring shot that does nothing for the plot and completely destroys the pace of the film. The filling out of the passport scenes is one of many examples.

A few scenes however, actually benefit from this style of film making, but only a few. When we anticipate something is about to happen, the long take helps to create anticipation and sometimes pulls the audience in further than we may want to go. When a girl goes to have an abortion, we see it from her arriving at the woman's house, the deal they strike and through to the actual procedure concluding, without a single cut. The very best example is the long take of the startlingly violent ending. If Slaboshpytskyi had limited the use of those long scenes to just a few important moments, this movie would have been at least a half hour shorter, which it definitely needed to be.

At over two hours, The Tribe can be a chore to get through, especially with the lazy style it employs. Add the lack of subtitles and I would not blame anyone for calling this movie unwatchable. I get that a point is being made about how deaf people must feel to watch sound films. However, subtitles have been available for years so the hearing impaired can still enjoy them. It was a horrible mistake to not include them here. Without being able to sign, it is nearly impossible to pick up on much characterization or motivation.

Also, these kids are at a school for months but we are only twice shown them in a class. They have the run of their dorms without anyone keeping an eye on anything they do. The police are occasionally shown passing by but they are never any type of inconvenience for these teenagers. We are never shown any of their parents. I was starting to see these juvenile delinquents as not living in our real world but in some other dimension where anarchy reigns.

Again, if The Tribe (Plemya) was shorter, these flaws would be less noticeable. There are some truly remarkable and memorable scenes in this movie but you have to keep yourself awake to get to them. The best thing Slaboshpytskyi could have done would have been to hand the completed film to an independent editor and let them cut this down to a watchable work of art. It would have certainly been better than this long, dreary, slow paced gimmicky film with several adult moments of sex and violence.