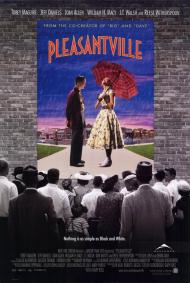 David, Jennifer and some colored kids.

Pleasantville opens with a series of scenes where teachers are talking about how bad the world is. One talks about the poor economy. Another talks about global warming. Another gives a lecture on aids. David is a high school nerd, who likes nothing more than to watch reruns of his favorite old black and white television show, Pleasantville. It is one of those 1950's family shows like Leave it to Beaver or Father Knows Best, where life is simple and far more optimistic than his real life. He plans to watch an all night marathon, when his self admitted slutty sister, Jennifer, tries to steal the remote. She has a boy coming over to watch a concert. The remote gets broke and Don Knots shows up with one that sends them into Pleasantville.

David fits right in. He even works his characters job at the soda shop. Jennifer is bored out of her mind until she discovers that the captain of the basketball team, Skip, likes her. "I don't know if I ever told you this before, but I think you're just about the keenest girl in the whole school!" He tells her. "Oh, really Skip? The keenest?" She responds. Whereas Skip was nervous to hold her hand, Jennifer introduces him to sex on their first date. After making out for awhile in his car, a perplexed Skip looks down at himself and says, "I think I might be ill. Something's happening to me." Jennifer responds, "That's supposed to happen."

Shortly after taking Jennifer home, Skip sees a red rose among the shades of his gray world. Skip tells the basketball team about sex, and before you know it, many teens are doing the deed and becoming colored. David meanwhile has encouraged his boss at the soda shop to pursue his dream of being a painter. He soon starts to see things in color. Jennifer discovers that all of the books in town are blank. She and David tell the teens what the books are about, causing the books to fill in. This results in more students turning into color after they read.

At this point in the movie I am all about the message of education being a path to freedom. The use of color as a metaphor for enlightenment is brilliant. The more people learn, the brighter the world around them becomes. If writer/director Gary Ross had stopped there I would have called this movie a masterpiece, but he had to take it one step further.

Almost all of the adult white males in town seem to be against things changing to color. They have book burnings. They are prejudiced against the people who have turned into color. David's television Dad is embarrassed by his wife having turned colored. He tells her to put makeup on it. The mayor gives a speech where he uses the word, "Right" many times. He tries to pass laws against the colors. What was a movie about discovering freedom through diversity becomes a liberal/conservative debate, with conservatism coming up short.

If Ross had wanted to be politically fair, he would have had at least one of the girls having sex become pregnant. They obviously did not have condoms in the town. In typical liberal fantasy, there are no repercussions for their actions. David’s TV mom has an affair on her husband, but acts like it is alright. The Soda Shop artist paints a nude picture of her on the window for all the town to see, and is then surprised when the town folk react shocked. As if they would respond any other way.

The best thing this movie says is that we all have to come to a point in our lives where we make a decision that sets us free. For some in the movie it is sex. For others it is discovering your passion in life. For David it was standing up for someone. For Jennifer it was saying no to sex and yes to an education. "I did the slut thing, David. It got kinda old." We all have to make decisions for ourselves if we want to grow and find true happiness, but responsibility comes with those choices. As this is a fairy tale, Ross chose to gloss over the responsibility aspect with a liberal twist. At the end of the movie it is not the wife who had an affair who has to apologize or admit guilt, but the conservative husband for taking her for granted? 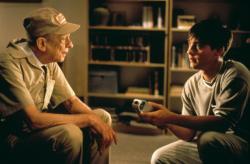 Gary Ross, the writer, producer and director of Pleasantville, is the son of screenwriter Arthur A. Ross who was black listed during the red scare of the early 1950s. He participated in Ted Kennedy's 1980 presidential campaign and wrote speeches and jokes for Michael Dukakis and Bill Clinton. With that background it's hardly surprising that this movie would have a liberal slant or that he would have a darker view of the innocent facade of the 1950s.

The story is presented as a fairytale so I don't suppose that it has to entirely make sense, but there are certain aspects of the movie that I question. What is the nature of Pleasantville? Is it a fictional land inside the television or is it 1950s America? Before David and Jennifer arrive the townspeople of Pleasantville don't know what sex is and no one shares a bed. Yet there are plenty of teen-agers and children in the town. So can the townspeople become pregnant? Everyone and everything is in black and white and yet the townspeople know the names of all the colors? I know that it's a fable and doesn't have to abide by any logical rules, but if the townspeople are merely figments of imagination than it's much harder to care about what happens to them.

Rarely has a movie made such a pointed use of color as this one. Not only is it used quite brilliantly as symbolism, but it's also quite beautifully shot. There are many striking images of vibrantly colored items against a black and white background that are quite dramatic and very artistically done. Its use as symbolism of an opening of the mind to the wider world and deeper passions is very well done. Sharp-eyed viewers will notice that the color doesn't just appear full blown. If you pay attention to background items, you will spot a gradual seeping in of color.

Beyond the use of color as a metaphor, there are other moments of symbolism ranging from the subtle to the blunt. As with most symbolism, it is the subtle moments that are the most effective. Margaret handing David an apple makes a nice picture, but is quite obvious. And the "no coloreds" signs are so overt that it barely qualifies as symbolism at all.

In the opening scenes at David and Jennifer's school we are told a series of depressing messages about the modern world. One of the messages refers to AIDS. These scenes are meant to show why David might long to escape into the more innocent world of Pleasantville. But as you mentioned Eric, Pleasantville soon becomes a hotbed of sexual activity. Now granted, this is a fictional world and pre AIDS crisis and again, I'm still not sure if people can even catch a disease in this world, but these two message seem at odds with each other.

Eric, you talked about the liberalism versus conservatism angle of the film and you have a legitimate complaint. The conservatives in the town go from being a little stiff and repressed to full blown book burning near Nazis seemingly overnight. However, I do think presenting the adult, white males as the group who most clings to the status quo is the correct one. After all, they're the group who has the most to lose and therefore they are the most likely to want to conserve it. However, having them go from being put out by not having their dinner ready, to rampaging bigots intent on rape and violence in a matter of days is where it goes too far.

Amongst all the symbolism and color are some nice performances. William H. Macy and Joan Allen are two of the finest actors working today. Maguire and Witherspoon also both acquit themselves well and have both gone on to strong careers.

Pleasantville is an ambitious film that never quite hits all of the notes it's striving for, but you have to give it credit for trying.

Pleasantville is uneven in its satirizing of suburban 50s America. Its message of conformity versus doing your own thing gets lost in the way the story unfolds. Granted the movie is a fantasy but like Scott I questioned some of the details in the world of this black & white family sitcom.

They don’t know what fire is yet they can cook food? And it never rains? Come on there must have been at least one episode where the Parker children drive their parents crazy staying in the house on a rainy Saturday afternoon. Or what about the time Bud nearly started a fire in the garage when he was playing with his father’s lighter while trying to impress the new kid next door?

Also the roads in Pleasantville all go in circles until the end where (apparently) it becomes part of the real world? Huh?

The scenes at the beginning of the movie serve no point and even contradict the message of the story. The idea that knowledge and sexual freedom lead to enlightenment is flatly refuted by the state of the post sexual-revolution world as depicted in the opening sequence. The ending is unsatisfying to say the least.

Eric, I’m a bit baffled by your problem with the portrayal of the town’s males (saying white males is redundant since there are no minorities in Pleasantville). Clearly this is a very conservative town and conservatives – by definition – don’t like social changes or anything that upsets the status quo, which is the reason they stay monotone in color while the people that follow their own path to happiness turn to color (it isn’t knowledge or sex but emotional truth that causes the change to Technicolor as evidenced by the fact that the mayor doesn’t change until he lets his unbridled anger show at the town hall meeting (his true colors you might say)).

I enjoyed the cast. Joan Allen gives the best performance. Watch the look of mortification on her face in the scene where she first turns to color. It was fun seeing Tobey Maguire and Reese Witherspoon at the dawn of their careers and Don Knotts at the twilight of his.

Pleasantville has an intriguing premise that needed to be better thought out. It does manage to entertain (I laughed at all the food Mrs. Parker serves her children and I agree that the use of color as a metaphor is beautifully photographed) but its message is muddled by the overly ambitious script.