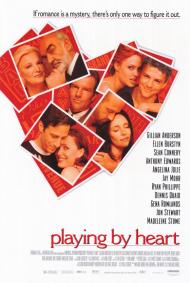 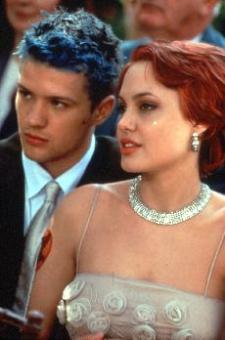 Ryan Phillippe and Angelina Jolie are playing by heart.

Playing by Heart opens with a close up of Angelina Jolie saying, "Talking about love is like dancing about architecture." It sets the ambitious tone for a movie that tries very hard to say that love is unique to those involved. We cannot always explain why we feel the way we do about someone, we just know that we do.

Playing by Heart tells several different love stories. One is Jolie as a wannabe actress/party girl. She meets Phillippe at a club where he always dances by himself. Jolie plays an extrovert while Phillippe is an introvert. She has some of the best lines in the movie. "When was having sex or not having sex not a problem?" When Phillippe finally tells her that he loves her, he says, "What did I ever do to deserve you?" Jolie responds, "Usually that line is screamed at me by someone running out the door..."

Anderson is a director who gets asked out by architect Stewart. He clearly likes her, but she has been divorced, and does not trust men. "I don't deal with passion well." she tells him, who responds, "Maybe you don't like that loss of control. You prefer to be the director, telling everyone what to do."

Another couple gets together every week for a sexual rendevous. She is married to someone else, while he is a minister. Her husband is in an acting class. He only shows personality when pretending to be someone else. "I'm better at all these lies I've manufactured than I am at the ones I'm living."

The one storyline that seems out of place is that of Mohr as a gay man dying of aids. His mother comes and stays with him in the hospital where they both reveal secrets to each other. Although his story is connected to one of the other story lines, his entire part could have been cut. This movie is clearly about couples dealing with love. This parent/child plot belongs in a different film. The mother role should have been replaced by his partner.

The most important couple is that of long time married Connery and Rowlands. They are the connection to everyone else in the movie. She discovers that he still has some feelings for a woman they both knew 25 years ago. Although he swears they never had sex, he admits he loved her. He has this line where he explains love, "The wonderful thing about falling in love is you learn everything about that person and so quickly. And if it's true love, then you start to see yourself through their eyes. And it brings out the best in you. It's almost as if you're falling in love with yourself." I understand what he is trying to say, but I prefer Jolie's first line.

Playing by Heart had a very limited release in the United States. I am not sure why, many far worse films have been given wider release. It's message of the importance of honesty in relationships is as valid as any message found in any other movie. Today it is only a peculiar DVD on a shelf at the video store. The all star cast is it's only legacy. The biggest casting coup being that of Jolie before she made it big. She plays the best character in the movie and looks damn good doing it. 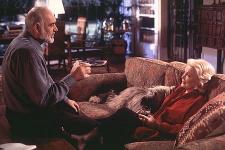 I agree that far, far worse movies than this one have been released. In fact, I quite enjoyed this one as well. But then a movie featuring Sean Connery, Angelina Jolie, Dennis Quaid and Gillian Anderson would be have to be pretty bad to not have something enjoyable in it.

My problem with multi-story arc movies like this one is that inevitably some of the stories and characters are more interesting than others. Like you Eric I found Mark and his Mother's story to be out of place. It would have made much more sense if his story involved his lover and not his mother. Every other storyline is about a romantic relationship in some stage or another, not relationships between friends or siblings, or family members.

The most interesting characters to me were Angelina Jolie as Joan (she acts circles around Ryan Phillippe in all of their dramatic scenes together and basically steals the movie) and Dennis Quaid's under-explored Hugh. His was the character I most wanted to learn more about. His wife Gracie (Stowe) and her lover Roger (Edwards) could have been cut completely and the movie wouldn't have suffered. I also enjoyed Connery and Rowlands together. They believably play a couple who have spent many years together. Although somehow I have difficulty seeing Jolie as Connery's daughter.

While it's true that no actor can make a bad movie into a good one, having this many good actors in an okay movie can raise it to a higher level. And certainly this is one that deserves more recognition than as an oddity in a DVD store. 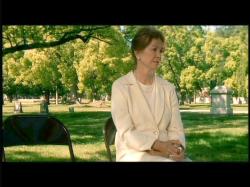 The great Ellen Burstyn in Playing by Heart.

The cast is the best thing about Playing by Heart. Angelina Jolie and Ellen Burstyn give the two standout performances. Jolie has a great scene near the beginning at the dance club where she's on the phone breaking up with her boyfriend. She carries on an angry, one-sided conversation in a voice loud enough for everyone in the immediate vicinity to overhear. Burstyn is heartbreaking as the mother losing her son to AIDS just when she is getting to know the real him.

The male characters are not as interesting, although I agree with Scott that Dennis Quaid is the most intriguing of the bunch. Sean Connery makes the most of his rather slight storyline. Jon Stewart should stick with The Daily Show, however, as he's no actor. Jay Mohr doesn't get enough screentime but is quite effective in the very dramatic role of the man dying of AIDS. While Ryan Phillippe's career is clearly based on beauty not talent.

The script is decent but it's a bit too prone to semi-clever platitudes. The line Eric loved so much is one of the better ones but Willard Carroll overworks the mixed-senses metaphor when he has Connery's Paul tell Rowland's Hannah, “Don't look at me with that tone of voice.”

It didn't bother me that Mark's storyline included his mother instead of a lover. The not so surprising connection between these disparate, and seemingly random, characters brings their storyline into the fold, so it makes sense as is. Besides if you cut the mother part you lose Ellen Burstyn. The one brief look she shares with Gena Rowlands is a masterclass in conveying emotion without uttering a word. These are two great actresses. Of the three younger women, only Jolie may one day be in their league.

Joan gets the lion's share of the meaty dialogue. Check out the way she rebuffs the advances of a sleazy guy named Max at the club. Max: “I uh... I like your tight body. It looks like it would do what I tell it.” Joan: “What?” Max: “I said...” Joan: “No, I heard what you said. And I'll admit 'What?' was a rather banal, cliché, noncolorful response. What I really meant to say was: 'Why don't you do the world a big fat fucking favor and crawl back into your mother's womb?'”

Playing by Heart is uneven. Some of the characters and storylines are more compelling than others. I agree with Eric and Scott that it's superior to a lot of movies, as it features a memorable cast and offers some often wry observances on the topic of love.