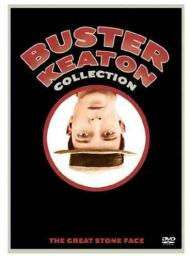 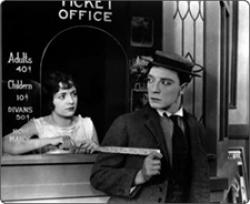 This silent short is a showcase of Keaton's many talents.

The Playhouse seems very much a sequel to the Arbuckle/Keaton short Backstage. Both films take place at a theater with a backstage area that looks suspiciously the same. Both films also have a large role for a fat man.

The big difference in the two films is that Keaton is the star here and not Fatty. In fact, the movie opens with Keaton having a dream in which everyone who works at or attends the theater is played by him. It is an early example of great film trickery. My 11 year old has developed a nice appreciation for Keaton and was amazed that he played so many parts, including women.

After waking from his dream Keaton does a few routines on stage. My 11 year old liked the monkey skit best where Keaton pretends to be a monkey after the real thing wanders off. Another skit involves some soldiers doing some marching and end up in a human pyramid, in which a fat man tries to climb on top. The role may or may not have been written for Arbuckle but it sure seemed like it was.

What plot there is involves Keaton getting confused by twin girls who work on the show. One does an act in which she holds her breath in a tank of water. That is until Keaton breaks the glass and floods the orchestra pit to the point that it becomes a pool. The movie ends with, what else, a chase.

The Playhouse is basically a showcase for Keaton's talent in front of and behind the camera. It has little plot but it did prove that he was very capable of starring in good comedy shorts and not just play the sidekick to anyone. 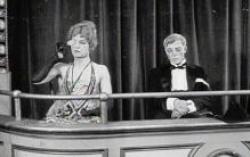 Buster Keaton as a woman and an old man.

This movie deserves 4 stars for its technical inventiveness and innovation. The numerous split screens must have been very difficult to pull off. Especially since there are several scenes where we see a dozen Keaton’s on stage at once. When Keaton, in the audience, reads the program, every part from actor to stagehand is listed as Buster Keaton, to which Keaton the audience member remarks, “This Keaton fellow seems to be the whole show.”

Another amazing thing about this movie is its level of surrealism. It’s trippy and could easily be described as “far out.” It’s not surprising that his films were rediscovered by college students across America during the 1960’s.

I agree with my nephew that the monkey bit is the funniest part of a very silly movie. Keaton shows what a genius he was at physical comedy. I laughed when he literally punches the punch clock. This movie is timeless. 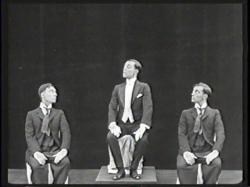 This short isn't quite as funny as Keaton's other work, but it is one of his most innovative films. Using technology of the day, which basically consisted of a shutter to cover part of the film, filming one character, then rewinding the film and uncovering another portion of film to film another character, Keaton was able to quite believably put 9 versions of himself onscreen at the same time. It's a simple but amazing effect that holds up quite well. Apparently the list of credits in the program all attributed to Keaton was a dig at fellow actor of the period, Thomas H. Ince who often gave himself multiple credits in his productions.

Although the laughs aren't as plentiful as in other Keaton shorts, there are some quite funny moments. I laughed hardest when the actor's fake beard gets caught on fire and Keaton puts it out with the fire ax. This moment also demonstrates that physical humor works best when it's a surprise and not over-used. There's also some amusing moments to be had with the mix-up of the twins and I laughed at Keaton's final solution of putting an X on the back of the one he wanted to marry.

The only moment that really reminded me of the Backstage short you mention Eric, is appropriately the backstage scene when there's some business with the dressing room doors. Other than that and the location, there's not that much in common between the two.

Perhaps the only other thing of note in the short is that Keaton does quite a good monkey impression.

When it came to timing and comic trickery in the silent era, Keaton was the preeminent master of the day as this short proves.