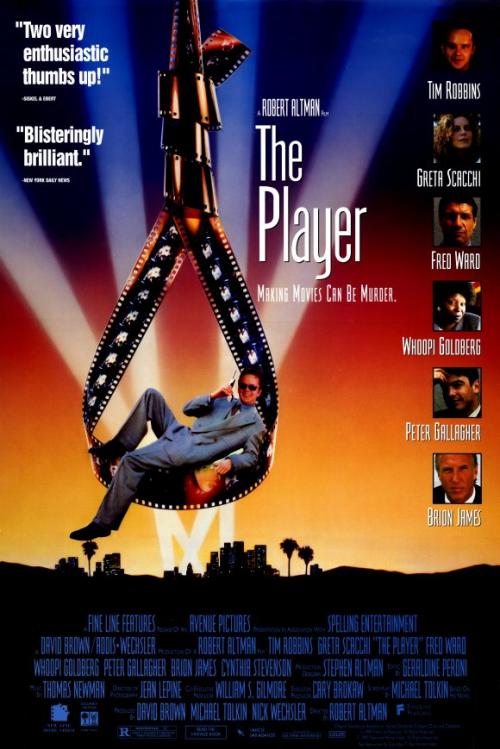 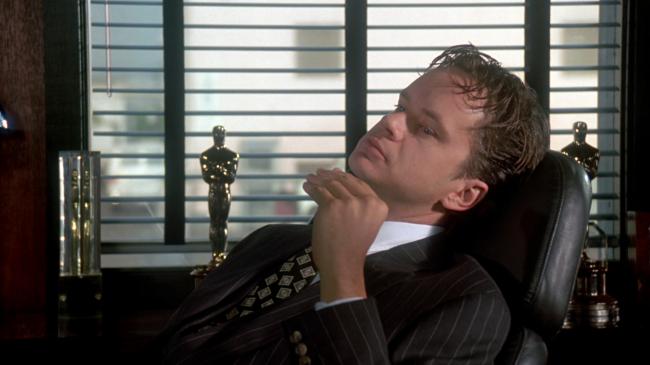 Tim Robbins in The Player.

The Player, Robert Altman's combination satire/homage to the Hollywood studio system brought his career back from the dead as far as those same studios were concerned. It was his first box office hit since Popeye (1980) more than a decade earlier. Unlike Popeye, which was lambasted by critics, The Player was critically acclaimed. It received three Oscar nominations (director, screenplay and editing) and won two Golden Globes (Best Motion Picture – Comedy/Musical and Best Actor in a Motion Picture – Comedy/Musical for Tim Robbins).

The title proved prophetic. Thanks to this movie, Robert Altman was once again a player in Hollywood. He would follow it up with Short Cuts (1993) and continue directing movies for another 14 years, right up until his death in 2006.

Robbins stars as Griffin Mill (Griffith DeMille?) a self-absorbed (is there any other kind?) Hollywood studio executive. He begins receiving death threats via postcards sent to his office. His paranoia grows as the threats escalate, eventually leading him to confront screenwriter David Kahane (D'Onofrio) whose script he once rejected. But first he meets Kahane's girlfriend. Her name is June Gudmundsdottir (Scacchi) and she's the femme fatale of this neo-noir Hollywood satire.

Right from its opening 8 minute tracking shot, The Player is crammed with Hollywood nostalgia, old movie posters abound and there are many references to classic movies. At the same time it pokes fun of Tinsel Town narcissism. Griffin Mills snidely telling a waiter he wants his water in a water glass - not a red wine glass - and then not even bothering to stick around to drink the water, sums this up perfectly. And for anyone counting, there's upwards of 60 famous faces on display (see cast list at left), some playing “themselves” while others (like Whoopi Goldberg as a Pasadena detective) play fictional characters within the story.

One of the most interesting shots in the movie is the love scene between Griffin and June. Altman filmed them entirely from the neck up – in close-up. In some ways it feels more genuine and intimate than many outright sex-scenes. Robbins and Scacchi generate a believable passion together. I don't know whether this was Altman's way of acknowledging his frequent use of gratuitous female nudity in some of his earlier films or it came about as a result of Greta Scacchi adamantly refusing to do a nude scene. Either way it works.

Among the highlights of the many famous cameos are Burt Reynolds calling Griffin Mill an asshole, Buck Henry pitching a sequel to The Graduate, and of course the ending with Julia Roberts and Bruce Willis. In my opinion it's the ending that made The Player such a big hit with audiences. In one scene Griffin Mill lists the necessary ingredients in marketing a picture successfully, “Suspense, laughter, violence. Hope, heart, nudity, sex. Happy endings. Mainly happy endings.” With the exception of nudity, The Player checks off everything on that list. At the last minute it veers away from its neo-noir style and goes out with the ultimate Hollywood Happy Ending.