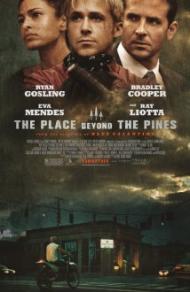 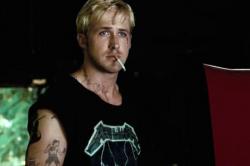 Ryan Gosling broods in The Place Beyond the Pines.

The Place Beyond the Pines starts off with a cool tracking shot following the back of Ryan Gosling's head as he walks towards, and enters, a raucous crowd-filled circus tent. Gosling plays a traveling motorcycle stunt driver who starts robbing banks to support his newly-discovered infant son. For the role he went bleached-blond and he's 'tatted-up', including a teardrop tattoo under one eye. For my money he's the coolest guy working in pictures since Steve McQueen. His opening act of this ambitious triptych is by far the most entertaining section of the movie.

The second act switches to Bradley Cooper's point of view. He's a rookie cop whom fate places directly in Gosling's path as he flees from the police after an attempted bank robbery. This guy's an honest cop and the son of a State Supreme Court Justice. He gets tangled up in a ring of police corruption, turns the situation to his advantage, and as a result rises quickly up the political ladder. Cooper is good as this young all-American idealist who passed the bar but chose to become a cop. He grows before our eyes into a coolly ambitious, and morally ambiguous, career politician.

The third act is set fifteen years later and deals with the next generation. What I didn't say before was that, like Gosling, Cooper had an infant son at the beginning of the movie. And of course these two boys wind up in high school together with no knowledge of the fateful connection they share through their father's common past. The movie seems to be attempting to make a point about what traits get passed down from fathers to sons. But it gets a bit muddled as there really isn't a good guy in the bunch; and this last act is filled with predictable movie plot contrivances you can see coming from miles away, which is only exacerbated by the languid pace of this over-long movie.

Anyone familiar with Derek Cianfrance's previous film, 2010's Blue Valentine, shouldn't be surprised by his somewhat bleak view of humanity. He doesn't seem to care for happy endings but he does write vividly drawn and emotionally complex characters. And what's more he's able to coax some of their best work from his actors. I can't fault a single performance.

The first act is brilliant as Ryan Gosling creates another iconic antihero, much as he did in Drive (although that's a much better overall movie). There is something ineffable yet compelling about him. It's the same quality that made Brando, Clift, and Dean so fascinating to watch. Bradley Cooper lacks Gosling's charisma but he gives a solid turn that keeps the level of the second act pretty high. Unfortunately what should have been a twenty minute epilogue about their sons, is stretched to a full act. The denouement isn't profound enough to justify the time commitment.

Regardless of its flaws, The Place Beyond the Pines is clearly the work of a very talented filmmaker. Oh and the title refers to the movie's location. It is set in Schenectady, New York. The word is derived from the Mohawk language and it translates loosely as, “place beyond the pine plains.” 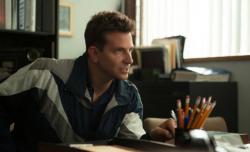 Bradley Cooper in The Place Beyond the Pines.

The meaning of Schenectady is "place beyond the pine plains", but that's just the surface meaning of this title. There are other possible meanings within the movie itself.  Bradley Cooper's character Avery Cross (Am I reading too much into it to think his name could be read as A. Cross? As in, "A cross to bear".) is taken into the pine forest twice in this movie, both times we assume to be shot and killed. It's the place where he must face up to the consequences for his actions. He and the other characters are trying to get beyond their past, to the place beyond the pines.

As Patrick wrote, it's the structure of this movie that causes most of its problems. It begins with its most entertaining act and each subsequent act gets less so. The first and second act would have been better served had they been partially edited together. We could have been introduced to Cooper's character earlier in the film and had part of his story intertwined with Gosling's. Instead, they feel very much like two separate stories. It almost feels as if we're watching two different movies, both of which are very slow paced. These two acts do add up to something that feels mostly complete. However, then we're given a third act that will have you looking at your watch waiting for it to end. Again agreeing with Patrick, this final section should have been a mere epilogue.

It's the acting that is the film's strongest point. Gosling continues his hot streak, proving that he's one of the most interesting actors working today. He brings an intensity to his performance that dominates the film. It's an intensity that Cooper can't match, even if this is one of his best performances. You feel Gosling's absence for the rest of the movie.

By the third act though, you're missing Cooper as well as Gosling. Their two sons, who take the focus in the final section, are both rather annoying, which adds to the feeling that the film drags in its final 30 minutes. The two actors playing them are fine, but nothing special. Certainly not good enough to make the running time any less annoying. Particularly, as Patrick mentioned, since this final section is so utterly predictable.

I agree that Derek Cianfrance is a talented filmmaker, but he could have used an equally talented editor on this film to tighten up the pace and structure. This isn't an awful movie, but it is a flawed one. 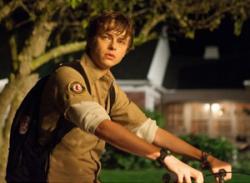 Dane DeHaan in The Place Beyond the Pines

The Place Beyond the Pines is a tale of responsibility. Gosling and Cooper play two very seemingly opposite men who are actually made from similar cloth. Although Patrick considers Gosling’s character to be an iconic antihero, I just found him to be a criminal, even if he is stealing money for his child. Cannot every criminal justify their illegal actions to themselves?

Patrick has every right to have his Gosling man crush, but I do not get his appeal. He is adequate but by no means do I see him as a Brando, Clift, or Dean. They were actors who created a more natural style of acting, while Gosling always seems to me as if he is trying to act like he is acting natural.

I am not prepared to call Bradley Cooper a better actor but he has grown in his profession. With this film and Silver Linings Playbook (2012), Cooper has proven to be a competent dramatic actor. Look at the man’s early work and you are seeing an entirely different performer than today. Like Gosling, he is playing a man of dubious morality, only he has better connected friends.

Both of my brothers dismissed the third act. The story of the two delinquent sons brought to mind some quotes from the Bible. “…visiting the iniquity of the fathers on the children, on the third and the fourth generations of those who hate Me," (Exodus 20:5). Both of these boys pay a price for their father’s behavior. However, just because these boys were given problems that they did not create, by no means excuses their actions. The Bible (often noted for its contradictions) also offers this quote from Ezekiel 18:20, "The person who sins will die. The son will not bear the punishment for the father’s iniquity, nor will the father bear the punishment for the son’s iniquity; the righteousness of the righteous will be upon him, and the wickedness of the wicked will be upon himself."

The Place Beyond the Pines is a film that may spark a conversation about culpability. The characters are real and well rounded. Derek Cianfrance is an extremely competent writer but I agree with Scott that he needs to speed things up a bit. It got to a point where I was spending more time trying to discover what this guy was saying than simply enjoying his story. The film makers are responsible for the quality of the work, not the audience.