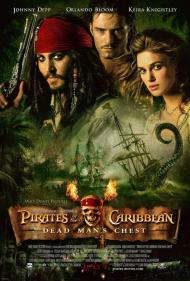 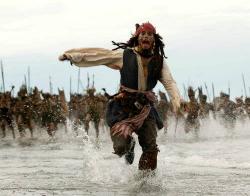 Johnny Depp in Pirates of the Caribbean: Dead Man's Chest.

Pirates of the Caribbean: The Curse of the Black Pearl was an astonishingly adventurous comedy that introduced the world to the selfcentered egotistical pirate, Captain Jack Sparrow. It likewise worked so well because it was a cut and dry action flick. Will Turner wants to save Elizabeth. Sparrow wants his ship back and the ghosts want to break the curse. All of the plots are neatly joined.

As Dead Man's Chest opens it is quickly mentioned that the huge cache of gold featured at the end of the first movie has all been lost. Jack shows up, without any back story, with a picture of a key that he needs to find because it opens a chest that contains something precious to Davy Jones(bad guy). Will and Elizabeth get arrested for helping Jack in the first movie. They are sentenced to death unless Will can find Jack and get his magic compass from him to give to the man who has sentenced them. The movie then proceeds with Jack having to pay a debt to Davy Jones. Will meets and wants to save his father. Elizabeth wants to find Will. Norrington shows up wanting revenge. Jack betrays everyone. Elizabeth betrays Jack and appears to betray Will. I am still not sure if I have all of this sorted out.

In the midst of all this there is a humorous side plot with some cannibals. They visit a voodoo lady who knows everything. Jack, Will and Norrington have an exciting sword fight on a giant wooden wheel. There is also a giant squid that shows up whenever things start to make sense. Last but not least is a hint of sexual tension between Jack and Elizabeth. "You know, these clothes do not fancy you at all. It should be a dress or nothing. I happen to have no dress in my cabin." Jack says to Elizabeth when he sees her dressed as a man.

Jack of course gets all of the best lines. At one point Elizabeth says to him, "There will come a moment when you have the chance to do the right thing." To which Jack replies, "I love those moments. I like to wave at them as they pass by."

Pirates of the Caribbean: Dead Man's Chest is good, fun popcorn fare but it hardly has the tight script of the first installment. Some blame for this can be that this is the Empire Strikes Back movie of the series. It sets up for the third film so perhaps everything will be resolved and made clearer in the third movie. 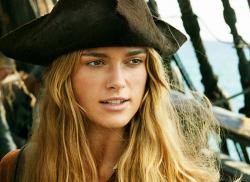 Keira Knightley in Pirates of the Caribbean: Dead Man's Chest.

I remember enjoying the original Pirates movie, but as its sequel opened I realized that I had almost zero memory about any of the actual details from that first movie. Turns out it didn't matter, as enjoying this movie certainly isn't dependent upon knowing anything about these characters. The story is simple and the characters fairly one-dimensional, but since the story and the characters are only there to service the action sequences this hardly matters. Like Eric said, this is strictly popcorn fare, only this time around the popcorn has grown a little stale.

The lack of a tight script is indeed this movie's greatest problem. The story is all over the place. Too many scenes are only there for the action and humor without ever servicing the plot. The cannibal scene that Eric mentions is a great scene but has absolutely nothing to do with the plot. Captain Jack's escape on the wooden stake is funny as is Will and the pirates race up the side of the cliff in the cages made from the bones of other pirates. The Voodoo girl is there because someone has to move the plot along and these feckless characters certainly can't do it on their own. All of these extra scenes add about an hour's more running time to the movie than is needed. They're still filming the third installment of the series, but with the running time of this one they would have been better off just chopping it in half and then, bam, there's your trilogy.

The biggest surprise from the first movie was Depp's performance as Captain Jack. His eccentric, to say the least, pirate captain was both original and funny. This time around it's just more of the same, with perhaps a bit less.

Eric also mentions the sexual tension between Depp and Knightly. This is a good thing, because there certainly isn't much there between Bloom and Knightly. They almost seem more like brother and sister than finances.

Like its predecessor, Dead Man's Chest is lightweight entertainment that is already starting to fade from my memory. 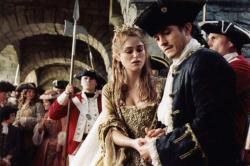 Keira Knightley and Orlando Bloom in Pirates of the Caribbean: Dead Man's Chest.

Simple old fashioned escapist entertainment is the secret to this franchises success. Like Scott I really couldn't recall the details of the first movie, I just remembered that I enjoyed it. The same will be true of this installment when I watch the third Pirates. But none of that matters. These movies are so gorgeous to look at and they evoke a magical nostalgic world that anyone would like to visit for a few hours.

I said this in my review for the first movie and I'll say it again. These movies are a throwback to classic Hollywood. They remind me of nothing more than the old Bing Crosby/Bob Hope Road pictures, only on steroids and minus the singing. Bloom is the straight man hero like Crosby, Depp is the selfish, cowardly Hope character and Knightly is of course Dorothy Lamour. The plots of those movies were just as forgettable and interchangeable as they are in this series. It's the characters, the adventure and the humor that counts.

Crosby and Hope's Road pictures were incredibly successful at the box office but have not stood the test of time to become true classics. I predict the same fate for this franchise. 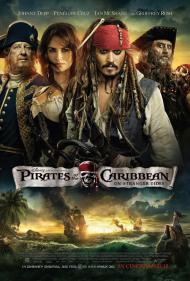