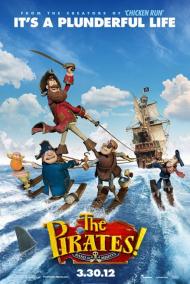 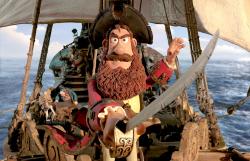 Hugh Grant is perfectly cast as the voice of the inept Pirate Captain in The Pirates! Band of Misfits.

Pirates! Bands of Misfits is another winner from Aardman Animations, the studio behind Chicken Run and Wallace and Gromit. While I wouldn't say that it's as outright funny as either of those two earlier features, it's still very amusing and a delight to watch with plenty of jokes for children and grown-ups alike.

An all-star cast is lead by Hugh Grant as an inept Pirate Captain, known simply as "Pirate Captain". It is his dream to win the Pirate of the Year award, something that is quite unattainable for he and his misfit, but likable crew. A chance encounter with Charles Darwin reveals that the Captain's beloved parrot Polly, is actually a long thought extinct Dodo bird. The Captain sees it as his chance to find fame and fortune when Queen Victoria offers to buy her from him.

Along with Grant, there are many other recognizable voices in the cast. Former Doctor Who, David Tennant, provides the voice of Charles Darwin. Martin Freeman is the voice of the Pirates' second-in-command. Jeremy Piven and Salma Hayek play rival pirates, while the rest of the cast is filled with enough recognizable voices that you'll find yourself waiting for the end credits just to confirm who they all were.

One character without a voice, is the scene-stealing chimpanzee, Mr. Bobo, who uses pre-printed cards to express what he wants to say. No matter what the situation, he has a card ready.

As always with Aardman, this movie is a visual treat. While most of it is done with their traditional stop motion animation, they have augmented the final film with CGI, mostly in the backgrounds and sets, putting their "clay" figures in front of green screens. It's a seamless blend and is mostly noticeable in the ocean, which would have been difficult to render using more traditional methods.

In any case, whether clay or CGI, there is so much to look at in every scene that it's impossible to see it all in just one viewing. There are signs and newspaper headlines that contain jokes in the background that are only visible for a split second, with barely enough time to read them. I'm sure I only had time to read half of them.

Some changes were made for the US release. The original title when released in the UK was The Pirates! In an Adventure with Scientists.  Was it changed because the studio thought American kids wouldn't want to see a movie with Scientists in the title? Even more inexplicably, while the majority of the cast remains British, the Albino Pirate's voice was changed for the American release. In the original it was voiced by Russell Tovey (Being Human, Him and Her), but in the US he has been replaced by Anton Yelchin. The reason I say inexplicable is, why change just one voice, and why Anton Yelchin? It's not as if his voice is so distinctive or he's so incredibly popular that he's going to effect the box office. If they'd replaced him with Justin Bieber or some other celebrity popular with the kids, I could understand.

The plot is silly, fun and fast paced. At just 88 minutes it whizzes by. The audience I saw this with was an even mix of small children and adults, both of whom seemed to be enjoying themselves. I know I did. There's already talk of a sequel and if it happens, I'll definitely be in line to see it.

As Scott wrote, this is a childish romp, but it contains a number of jokes for adults.  The entire premise is hilarious in that a pirate wants to win an actual award called "Pirate of the Year."  As the Pirate Captain says, "Every time I've entered, I've failed to win. So, I must have a really good chance this time!"

At a sea side bar, to fill out his application for consideration for the award, he confidently answers such questions as how nice is his beard.  In succession, other pirates enter the bar in grander and grander fashion.  By the time the last one arrives via a whale, the Pirate Captain has pretty much given up on entering the contest, let alone winning.

I also liked the running adult jokes about Charles Darwin needing to get laid.  Okay, they say "needs a girlfriend," but adults know what they mean.  When the Pirate Captain and his crew arrive at Darwin's unattractive house, the Pirate Captain says, "You don't get many girls, do you?"

The combination of clay with CGI works very well together.  If Aardman Animations has shown us anything, it is just how much you can do with clay and stop motion filming.  However, things like the ocean and the crystal chandelier in the Queen's palace work much better as computer animation.   It is a nice mix of two very different art forms. 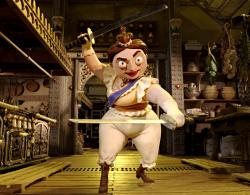 This is a very fast paced and quite funny movie. Visually it's a feast for the eyes. The idea of pirates competing in a popularity contest is hilarious. Queen Victoria cracked me up, “I HATE PIRATES!” Who knew she was so incredibly deadly? (see photo)

I have to admit I'm not much of a fan of cartoons in whatever form they take, be it claymation, CGI or old fashioned animation. Pirates! Band of Misfits is very enjoyable though for young and old alike. The script is clever. I laughed at The Pirate Captain's attempts to collect booty. Each ship he swings to on a rope provides a different reason for him to fail. One is a ship with a plague, one is a ghost ship and my personal favorite is a ship with a bunch of kids on a field trip.

The story gets more and more ridiculous as it goes along but fortunately the jokes keep coming as well.  Pirates! Band of Misfits didn't change my mind about animated movies but I do have to admit that in spite of myself I thoroughly enjoyed it.