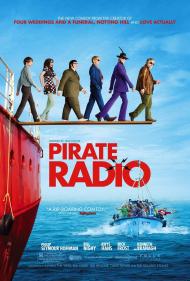 Very little sex, no drugs, but a lot of Rock n Roll.

Pirate Radio, or The Boat that Rocked as it was titled in the UK, is a comedy tribute to the renegade DJs from the 1960s who broadcast Rock and Roll music from ships in the North Sea when the BBC would only play it for a few minutes each day. It features a large cast played by fairly well known British actors (at least well known in the UK and to Anglophiles). Although at times, especially near the end, it becomes a little sappy, there are enough laughs to keep it all entertaining, even if it does run a bit long.

The story is mostly told from the point of view of Carl, a young man sent to stay on the boat by his mother. Quentin (Nighy), Carl's godfather, is an aging free spirit who runs the boat. Vaguely it plays out as a Carl's coming of age, but really it's just a series of vignettes on the boat.

Virtually everyone on the boat is some kind of character. Phillip Seymour Hoffman plays The Count, an American DJ. Although the previews (presumably because he's the only name American audiences are likely to recognize) make him out to be the star, he's really just part of the ensemble. Nick Frost (Sean of the Dead, Hot Fuzz, Spaced) is funny as the DJ who inexplicably seems to be a sex symbol. Chris O'Dowd (The IT Crowd) is good as the hapless, unlucky in love DJ, as is Rhys Ifans (Notting Hill) as the legendary British DJ. Also quite funny is Kenneth Branagh as the uptight MP who tries to shut the pirates down.

Along with the humor, the movie also features a classic soundtrack of 1960s hits. It seems laughable now that someone would try to censor these songs, especially as this version keeps the action very much in rated PG territory. Although sex is suggested, it is kept quite innocent and drug use is practically nonexistent here when you just know it must have been quite prevalent. Instead of Sex, Drugs, and Rock n Roll, this is more like Necking, cigarettes and Rock n Roll. The music was revolutionary at that time, something this movie could never be said to be.

While the movie is making you laugh it works, but the end is a bit melodramatic with soaring music and a sense of importance that belies the humor that came before it.

Overall it's enjoyable enough with a likable cast, but it falls short (or perhaps long) of being anything more. 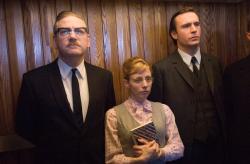 Music and song has been with mankind since we were able to put two syllables together and hit a rock with a stick.  Songs are a prayer, a poem, an act of defiance, an attempt at seduction.   Songs express hate and love, remorse and anticipation.  They encompass all our emotions, and often allow us to express ourselves in ways we are unable to with our own words.  Songs reveal our emotions.  Songs set us free.

Although it does run too long, Pirate Radio celebrates the joyous feeling of freedom that music gives us.  Each generation has its poets and cultural pop icons.  They make their generation feel unique, defiant and alive.   It is fruitless to attempt to squelch the next generations taste in music as nothing can stop change.

The more you complain about a new sound, the more you will hear it.  Some socialist/communist governments try to censor what its population reads and hears.  As Quentin says at one point, "Governments loath people being free."  Such oppression only causes people to want to hear and learn more.

I am not sure how active the British government really was in trying to put a block on rock music in 1966, but  Branagh made me laugh often.  He complains about an associates haircut and loves to call another by his last name, Twatt.  Referring to pirate radio he says, "We have their testicles in our hands, Twatt, and it feels good."  My favorite line of his is,  "You see, that's the whole point of being the government. If you don't like something you simply make up a new law that makes it illegal."

Most governments have finally realized the futility of censoring music and have now moved toward the internet.  In England it is the Digital Economy bill, which allows the British court to block any website they see fit.  In the United States it is the Combating Online Infringement and Counterfeits Act, which also allows courts to block any domain.

I go on about this because Pirate Radio is about freedom.  Whether it is visiting a web site that talks bad of an administration or listening to a song that some one else thinks is offensive, everyone wants to express themselves as they see fit.   I am a conservative and I have Springsteen blaring.  Like it or not, I do not give a damn.  It is called freedom, "...these are the days baby!" 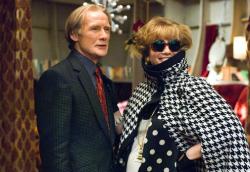 There are some humorous moments and an interesting mix of characters but I agree with Scott that the ending is a bit overcooked and the coming of age angle is never fully realized. I also agree with Eric that Pirate Radio does a good job of showing the evils, as well as the ultimate futility, of censorship.

Emma Thompson has a funny scene as Carl’s stylish, alcoholic mother; in her very reserved British way avoiding talking about the personal matter of just who her son’s father is (this plot device is never satisfactorily concluded).

I also laughed at Thick Kevin’s absurd attempts at playing charades. Here’s how he describes Robin Hood. “It's a type of bird, but it's wearing a hat. Not so much a hat. Something that's at the top of a coat and attached to the coat and covers the head, but is not a hat.”

The one moment of emotional truth comes when Hoffman’s The Count gives this little speech to Carl. “You know, a few months ago, I made a terrible mistake. I realized something, and instead of crushing the thought the moment it came I... I let it hang on, and now I know it to be true. And I'm afraid it's stuck in my head forever. These are the best days of our lives. It's a terrible thing to know, but I know it.”

Don’t we all have those halcyon days of our youth that we look back fondly on? For me it would be my carefree summer days as a camp counselor back in the 1980s.

Pirate Radio tries to be inclusive by having a lesbian and a black man on the boat. In 1966 this was truly groundbreaking. Unfortunately the script treats them both as the token representatives of their respective minorities they are, instead of giving them any good lines or much importance in the story.

Pirate Radio works best as a call to arms against fascist government policies, as movie entertainment it disappoints (except for the soundtrack which kicks ass!).