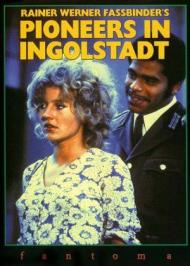 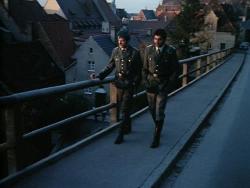 This early Fassbinder film tells the story of two very different women, both friends, in a small German town. One is Berta an innocent maid and virgin who falls hopelessly in love with Karl, the first man she has sex with. The other woman is Alma the town slut. She is sleeping her way through all the soldiers (or pioneers as they are called) that are in town to build a bridge.

The movie is a slice of life comedy/drama that shows what these lonely soldiers' lives are like in a country at peace. Most of the scenes take place at night, many of them in a local park where the soldiers go to find easy sex. Fassbinder didn't pull any punches when it came to his characters. Most of them are morally reprehensible, they spend their time getting drunk, having sex and occasionally beating someone up.

He is more sympathetic towards his female characters, but with the exception of Alma, they are portrayed as emotionally needy victims.

As with most Fassbinder movies there is some interesting camera work. One shot in particular is reminiscent of a scene in Citizen Kane. Two characters are talking over breakfast and the camera keeps panning back and forth between them.

This one will please fans of the iconic German director and it's certainly worth a look. I just don't know how much appeal it will hold for anyone else.