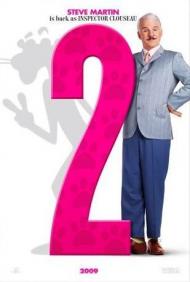 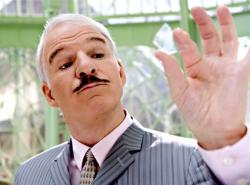 Steve Martin in The Pink Panther 2.

“Let me bring you up to speed... We know nothing. You are now up to speed.” That will likely be the most famous line from The Pink Panther 2. Not that it is saying much for that line, as this movie will disappear from theaters as soon as something better comes along. By better, I mean almost any comedy soon to be released.

Pink Panther 2 opens with Clouseau assigned to parking ticket duty. He is, of course, as incompetent as ever at this job, as he is with any. A master thief known as The Tornado steals several of the worlds most famous artifacts and a dream team of detectives from around the world are assembled to solve the crimes. They demand that Clouseau be a part of the team as he was the one who recovered the Pink Panther diamond in the first movie.

Clouseau goes about bumbling his way through the investigation, often being more of a hindrance than a help. A side plot involves his unrequited love for his secretary Nicole. There is a third plot in which Clouseau must attend political correctness class, taught by Martin’s All of Me co-star Lily Tomlin.

There are some laughs here if you like slapstick, and Martin does some great work reminiscent of silent film comedians. In one scene he has too catch many bottles of wine and toss them to waiters before they break. My favorite bit was when the other detectives are questioning a suspect while on the security monitors in the background you can see Clouseau doing all kinds of prat falls trying to sneak around the mansion.

John Cleese has a line that garnered a big laugh from the audience. He says to a matre de at a restaurant, “Do you know my wife?” As if referring to the beautiful young woman on his arm. The matre de says that he does and Cleese continues, “Good, let me know if she arrives.”

The Pink Panther 2 is clearly aimed at children. Kids will likely love the scene where Clouseau gets beat up by two young boys. It is fun and enjoyable, but there is never a moment of real hilarity. Much like the first movie, it is as forgettable as it is harmless.