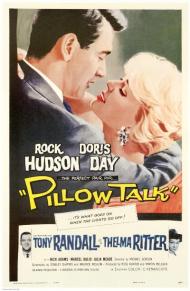 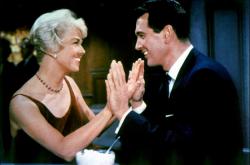 Pillow Talk is a great romantic comedy. Original and a bit risqué when it first came out. Day spends the entire movie being pursued by many different men. Its plot now seems old because of its morals and its sitcom television show plot. In fact, watching this movie is like watching a really long sitcom with a great cast.

Doris Day plays a single working woman who lives in a nice apartment in Manhattan. Her only problem is that she has to share her phone line with a randy song writer, Rock Hudson. Often she picks up her receiver to make a call and hears Hudson singing the same love song to different woman. The use of split screen is done well here and often.

The best piece of dialogue in the movie happens on the phone. Hudson- "Look, I don't know what's bothering you, but don't take your bedroom problems out on me." Day- "I have no bedroom problems. There's nothing in my bedroom that bothers me." Hudson- "Ooooh. That's too bad."

She goes to the phone company to ask when she will lose her party line and get her own number. It is explained to her that if she were pregnant she would get her own line sooner. Day replies to the man that she is not married, so of course she is not pregnant. An agreement is struck with Hudson through the phone company that they each use a half hour of phone time. Hudson breaks the rule almost immediately.

He eventually finds out what Day looks like and pretends to be gay to get close enough to seduce her. The fact that Hudson came out of the closet years later only adds to the movie. It is a gay actor playing a straight man who is pretending to be gay.

The supporting cast is excellent. Tony Randall plays Hudson's best friend who is also in love with Day. Thelma Ritter plays Day's maternal drunken maid who enjoys listening on the phone as Hudson seduces some bimbo. Interestingly both Randall and Ritter would practically reprise their roles opposite another famous blonde, Marilyn Monroe. Randall doing supporting work in Lets Make Love while Ritter does the maternal thing for Monroe in The Misfits. 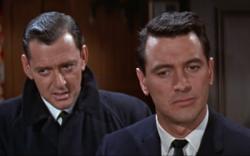 The one thing that completely confuses me about Eric's review is his claim that Rock Hudson pretends to be gay to get close enough to Doris Day so that he can seduce her. I don't know if Eric fell asleep during this movie or if he just wasn't paying enough attention. At one point in the movie, Brad Allen (Hudson) gives Jan (Day) some advice over the telephone about Rex Stetson (also Hudson). He tells her that if he didn't make a pass at her than maybe he's gay. Later on their date that night, Stetson makes a few innocent comments that match up with what Brad told Jan earlier, which makes her wonder for about two minutes whether or not he is gay. That's it. By this point they have been dating for weeks, so I don't think it's fair to say that he pretended to be gay to get close to her.

Ok, that one point out of the way, I completely agree with everything else Eric wrote. This is a great, romantic comedy with some genuine laugh out loud moments. Particularly funny are, as Eric pointed out, the supporting cast, especially Thelma Ritter. My favorite bit of dialogue has to go to Rock Hudson when he says in reference to his night spent drinking with Thelma's character, "I managed to keep up with her through the bottle of Scotch, but she lost me halfway through the bottle of Vodka."

Eric is also right that this movie is dated. Jan goes on a date at one point during which her date tries to force himself on her while they are parked by the side of the road. Today she'd be suing him for attempted date rape, but at the time it was just another date.

Funny and sweet, even if it is completely predictable and dated, Pillow Talk is vintage comedy. 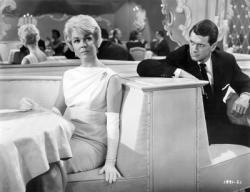 Doris Day and Rock Hudson made a memorable team.

Rare is the classic Hollywood era movie that my brothers like better than I do. Pillow Talk is one such movie.

Sure the jokes are there and Thelma Ritter and Tony Randall both shine in supporting roles. Doris Day is properly cute and spunky and Rock Hudson plays a smarmy playboy with real panache. I've just never been a huge fan of Day. And even though she is fine in this role I never buy the chemistry between Jan and Brad. I mean was she just an uptight prude that secretly yearned to be swept off her feet by a callous wolf or was he suddenly tranformed by true love into a sensitive and faithful lover? Either way the central love story never quite rings true.

Perhaps I am being too hard on a simple romantic comedy but I always find myself let down by this movie. Again, it is witty and the clothes and interior designs in the movie are wonderful to look at. Doris Day wears many chic outfits and truly looks like a star and Rock Hudson is simply gorgeous.

Yet and still, especially since they are considered to be such a classic Hollywood team, Pillow Talk doesn't live up to the hype.