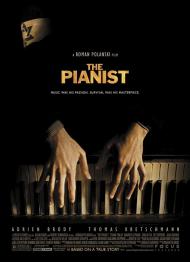 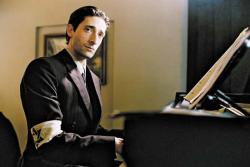 Many movies have been made about The Holocaust, most notably in recent years, Spielberg's Schindler's List.  The Pianist, which tells one Jewish man's story of survival in Warsaw Poland during World War II, affected me much more strongly than any of those earlier movies.  By comparison, Schindler's List is Pretentious Hollywood crap.

Wladyslaw Szpilman (Adrien Brody) was one of Poland's top Pianists, he was also Jewish. The story covers the years 1939 to 1946 in Szpilman's life.  The entire film is from his perspective, and he is in every scene, barring a few cut away shots here and there.

The movie begins with the bombing of Warsaw.  Szpilman and his family prepare to flee before the Nazi invasion.  When news comes over the radio that England has entered the war and France is soon to follow, they change their mind, counting on the fact that the Nazi's will have to turn their attention elsewhere.

One thing this movie does is show very well just how insidiously clever the Nazi plan really was.  For when they arrive in Warsaw, despite the allies entering the war, they begin slowly to pass laws restricting Jewish freedoms.  First barring them from restaurants, and parks, and other public areas.  Then restricting their other rights slowly.  Forcing them to wear badges to show that they are Jewish, the measurements of which are carefully spelled out in the newspaper with German precision.  Always before the next round of restrictions, first there comes the rumors, then the newspaper reports, and finally the enforcement.  Nearing the final phase of the Nazi plan in Warsaw, and following the rumor, news, enforcement scheme, all Jews, including Szpilman's family, are forced to move into a Ghetto which the Nazi's seal shut with a brick wall.  The slow build up of cruelties and restrictions, rather than immediately arriving in the city and locking away all Jews and risking the possibility of rebellion and resistance, allowed the Nazis to wear the Jews down until when the point was reached where Resistance and Rebellion should have been inevitable, the people were too weak and demoralized to be able to react.

This first half of the movie, leading up to the Nazi's Final Solution, is shown through the Szpilman family.  Their varying reactions, the father's weary acceptance, the youngest son's anger, the mother's worries over caring for her family, represent all of the differing Jewish reactions.  Overriding all of these emotions and represented most clearly by Wladyslaw, is a sense of bewilderment.  Bewilderment over the cruelty of man against man.  The many shocking scenes of cruelty go on and on, until they become commonplace, and all attempts to care for the dying give way to just trying to survive yourself.

When the time comes when the Nazi's begin moving the Jews to the concentration camp, and the Szpilmans are being boarded on the trains with everyone else, Wladyslaw is offered a chance to escape.  A chance, that despite leaving his family to their fate, he takes, knowing that if he goes he will die as surely as the rest of them.

With the help of friends on the outside he is put into hiding in an abandoned apartment.  Living on the kindness of others he observes a good portion of the war, and the too late in coming Jewish rebellion from his window.

As the war comes closer to its end and the Russians begin bombing Warsaw, he is forced out of his apartment and into the ruins of the city.  It is there, clawing through an abandoned home where he is suddenly confronted by a Nazi officer.  I will not reveal the result of their meeting, but I found it moving in a way that was completely true and un-Hollywood.

Roman Polanski, who was forced into a concentration camp as a child, and whose mother died in the camps, directs the movie with restraint, avoiding sentimentality or heroics, instead letting the events and the actions tell the story.  This movie is not a thriller as some of the ads for it would have you believe.

I hate to use words like powerful or moving in a review because they are such overused clichés.  In the case of The Pianist however, I feel they are warranted. 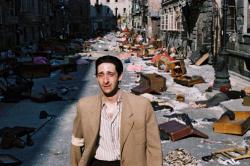 I agree completely with Scott. The Pianist is the greatest Holocaust movie. I almost am uncomfortable writing that. To say something is great that came out of such a terrible time is disconcerting. But this is a film that educates as well as makes you feel.

I recently read that Spielberg has been visiting schools that have shown their students Schindler's List. It is being used to teach students about the Holocaust. I find that typical our public school system. Choosing an inaccurate film to educate our children. Schindler was as much an opportunist as he was a hero.

The Pianist should be the film of choice when educating people of all ages about the holocaust. The Pianist answers the one great question everyone asks when studying the Jewish experience. Why did they cooperate so easily with their own destruction? As Scott wrote, this movie demonstrates the way the Nazis restricted the Jews over time until it was really too late to do anything. The younger brother defiantly stating that he will not wear an armband or some disgruntled comments are all they seem to do in response to their losses of freedom. It is not until the factual ghetto upraising that the Jews finally fought back. Those hold outs were true heroes. Alas, they were a little too little, and a little to late.

The Pianist is beautifully shot. Some scenes carry tons of emotions yet have little to no dialogue. The scene where Szpilman climbs over the wall and is walking through a veritable waste land of destroyed buildings is a powerfuly quiet, cold image of death.

When my children ask me about this time in our worlds history I will show them this film. Schindler's List is a self righteous rewriting of history. The Pianist is a sensitive story of immense sweeping emotion. It is the most personally insightful holocaust story since The Diary Of Anne Frank. 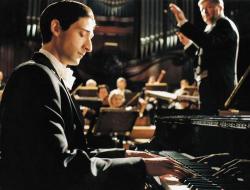 The Pianist is a masterfully directed and brilliantly acted movie. At the same time I have always considered Schindler's List to be a powerful cinematic depiction of Nazi Germany. So what if Spielberg took dramatic license with the title character. I have always maintained that if it is historical accuracy you want then rent a documentary. And while The Pianist might be a more factual movie, I found it less entertaining.

Clearly this was a very personal work of art for Roman Polanski, having survived the inhuman cruelty of a concentration camp as a child. Scott is correct that he directs with restraint, avoiding crass sentimentality. Unfortunately he goes too far in the other direction. A little more overt emotion would have been welcome. Instead he treats this movie more like a book, in the sense that much of what is going on in the title character's head and heart is left unspoken. While this works artistically, it makes for rather dry viewing after a while.

That said I must offer the highest praise for the visual look and feel of The Pianist. As my brothers have said it contains some starkly powerful images of war and destruction that stay with you. My favorite moment is the scene where he plays the piano for the German Officer that has discovered him hiding in the old burned out building. The music allows him to reclaim his lost humanity. And Adrien Brody does give an absolutely riveting performance. He goes from expressing disbelief at the insanity around him to finally becoming merely an animal bent on survival at any cost. A well deserved Oscar winning turn.

This review probably reads more negatively than I intended. I really did enjoy this film. Still with acting of this caliber amid such powerful content it would be difficult to make a bad movie. The Pianist is (to quote one of my favorite lines from The Way We Were) 'So true to life, so true to life'. 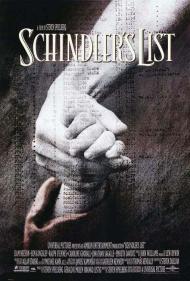