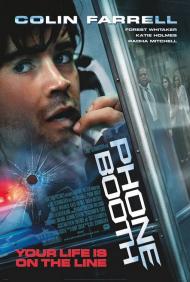 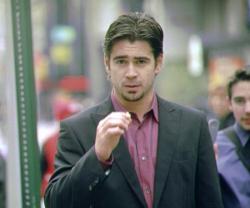 Phone Booth is a dumb movie on almost every level. What tries to be a moral lesson is actually just the opposite. Farrell teaming up with his Tigerland director Joel Schumacher is not enough to save this utterly stupid film.

Farrell plays Stu. He is a slick, fast talking bullshitter. He is having an affair on his wife and pretty much tells people what they want to hear so he can get what he wants. The idiot actually answers a ringing phone in a booth he passes on a New York street.

On the other end of the phone line is a man with a snipers rifle pointed at Stu and anyone near him. This guy knows all about Stu's affair and his dishonest ways. Through intimidation of being shot, or having his wife shot, the assassin has Stu ask a police detective if he masturbates. In front of a crowd that includes both his wife and girlfriend, he has Stu confess about the affair.

He wants to control Stu. He has seen Stu around and heard his conversations. Therefore, he has developed so much anger toward Stu that he does all this. What bullshit! I want my money back. This is supposed to be some moral lesson about honesty. 'Confess Stu.' The assassin says. Well Stu confesses and the killer gets away. The only lesson this movie teaches is that killing someone is less of a crime that lying! Only Hollywood could come up with such a morally fucked up movie.

Farrell is decent in this role. He does the whole desperate, frustrated, scared act well enough. He looks embarrassed when required to do the snipers bidding. Considering how lousy this movie is, acting embarrassed probably just came naturally to him. 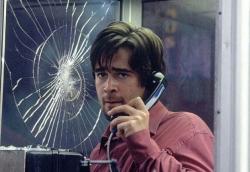 Eric is a little overly harsh in his critique of this film. Rather than being the horrible movie that he describes, I would refer to it as unsatisfying. I was never bored while watching it (which is pretty amazing considering 99% of the movie takes place inside the titular phone booth), but was left with a feeling of, "That's it?" at the end. The sniper's motives seem too shallow for all the trouble he went through to get Stu in that phone booth, and this lack of motive weakens the ending to such a degree that it pulls most of the enjoyment out of the movie.

What keeps the story ticking along are the sympathy of Farrell's performance and Schumacher's rapid-fire direction style, which keeps the action moving even when everyone is standing still. It is only because of Farrell that we care at all what happens to the slime ball character that he is portraying.

Maybe if they had put the writers of the movie in a phone booth with a gun at their heads then they would have come up with a better ending, or if not, they could have just filmed that. For the sake of a movie, it would have made for a better motive and a better story. 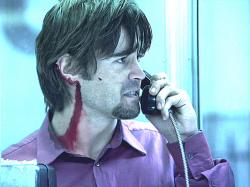 What neither Eric nor Scott got about this movie was the homage it pays to old Times Square. Although set in 2002 it definitely recalls the sleazy Times Square of the seventies. C'mon, real phone booths like the one in this movie don't exist anymore. In the new and improved Disneyfied Times Square you will never see such brazenly dressed prostitutes acting out in public in broad daylight as portrayed in this movie. At the corner of 14th Street and 9th Avenue after dark, yes (although most of them are six foot tall drag queens) but not in Times Square. Another throwback is the fact that Colin Farrell's Stu Shepard is an obvious modern-day version of Tony Curtis' Sidney Falco from Sweet Smell of Success. They are both slimy press agents working a Times Square beat who will do or say just about anything for publicity. The difference is that Stu Shepard repents for his wicked ways, while Sidney Falco remains a scum bucket.

Therefore, because the movie is set in what is almost an alternate universe, it works for me. I enjoyed it quite a bit. It is fast-paced, well-acted and makes interesting use of split-screen images. Also at less than ninety minutes there is not enough time to get bored.

Colin Farrell proves just how good of a movie star he is by not only commanding the audiences attention in nearly every shot, but by making the rather implausible plot seem like it is really happening. While I agree that the sniper's motives are a bit weak, it didn't bother me because it seemed to fit into the fantasy world that the director created. No, the action in Phone Booth would not really happen, but then the city and characters portrayed in it don't really exist either.