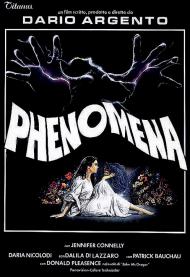 A young Jennifer Connelly in Phenomena.

Phenomena is one from the "Before They Were Stars" file. Jennifer Connelly, in just her second film and first starring role, shows that everybody has to start somewhere, no matter how weak the material. In fact, this material is so weak, it's impressive just how far her career has gone since this film was released.

Connelly plays Jennifer Corvino, the wealthy daughter of an American actor who is sent to an exclusive girl's school in Switzerland. This absentee, neglectful father is never shown. All communication to him is done through the family lawyer. Neither Jennifer's lawyer nor her father bother to do any research about her new school. If they did they might have learned that there's a serial killer in the area who's killing teenage girls.

Had this been a simple slasher film, what followed might have been pretty standard fare with the killer tracking down and killing teenage girls with Jennifer being the one good girl who survives. This movie isn't satisfied with being simple or standard though.

It seems that Jennifer has, for reasons never given, the ability to communicate telepathically with insects and the insects protect her and do her bidding. Living in the area is a famous crippled entomologist (Donald Pleasance) with a pet chimpanzee who helps Jennifer realize her power. Together Jennifer and the scientist decide to track down the killer.

While the first portion of the film is just poorly written and acted, the final act is so bad and over-the-top that it's actually awesomely entertaining. I mean we're talking a knife wielding chimpanzee, a detective graphically breaking his own thumb, Jennifer swimming in a tank of maggot and body part soup, and the 11th hour addition of a psychopathic, disfigured little boy. It's so disgusting that it will make you laugh out loud at the audacity of it all.

Although there are plenty of elements to choose from, perhaps the absolute worst part of this movie is its soundtrack. It's not that the songs themselves are bad, just really out of place. It's as if someone put an iPod filled with heavy metal on random and then laid the songs onto this film without the slightest regard to what's actually happening onscreen when each song is played. There are moments when Jennifer is sleepwalking (oh yeah, she sleepwalks while having visions of what bugs are seeing) through dark woods and a rock song is playing, killing any hope of atmosphere the scene might have been setting.

I'm sure this isn't one of the movies Jennifer Connelly looks back on with pride when she contemplates her career. At least she can take comfort from the fact that she's not the worst part of it. 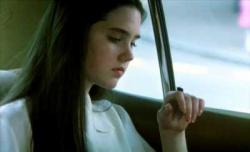 Jennifer Connelly and her pet fly in Phenomena.

As Scott's review attests, Phenomena is one very bizarre movie. It is one of those horror films that's so bad it's almost good. Its director, Dario Argento, is known for his horror films, in particular the Italian subgenre known as giallo. This type of film typically involves murder mysteries that mix elements of horror with eroticism. Phenomena was filmed in English and then dubbed in Italian.

What I was most surprised about was the fact that Jennifer Connelly was just 13 years old when she was cast in this movie. She certainly looks and acts more mature than that. This role includes some pretty intense stuff for such a young person. Connelly has never been the world's best actress and here her lack of experience shows through intermittently. There are times when you can tell she's TRYING to act. Her best scene comes at the end when she is swimming in the lake with just her head above the water. The camera lingers on her face and she looks like a movie star. She gave her all for the part, that's for sure. She even had the tip of her finger bitten off by the chimp in the final scene (doctors were able to reattach it). Talk about suffering for your art!

Everything about Phenomena is over the top. It begins with a murder in a remote area of the Swiss Alps (which several characters very unsubtly refer to as the Transylvania of Switzerland) before the unsuspecting Jennifer arrives at her new school. Her very first night at school starts off in a terrifying manner as she sleep walks and witnesses a girl being brutally killed. As my brother noted, all of this happens while heavy metal music blasts in the background.

I will admit that I didn't suspect who the killer was but mostly because I was distracted by just how bad the movie is. Scott mentioned several of its unintentionally funny aspects. Jennifer's communing with insects being one of the most hilarious plot devices I've ever seen in any movie. There is even a scene at the end where the killer taunts her by screaming maniacally, “Why don't you call your INSECTS! GO ON! CALL! CALL!” But who needs insects when there's a razor blade wielding chimpanzee on the loose. Seriously.

Phenomena is strictly for fans of gross yet silly horror flicks or huge Jennifer Connelly fans like my brother.