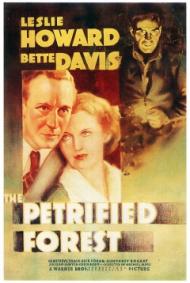 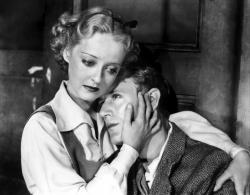 Bette Davis and Leslie Howard in The Petrified Forest.

Adapted from the stage play, The Petrified Forest is filled with memorable characters and vivid dialogue. Filmed on a set it nonetheless evokes the look and feel of a remote desert café/service station with its blinking neon sign flashing 'Bar-B-Que' against painted backdrops and rolling tumbleweeds. The interior scenes contain the proper element of parched claustrophobia and forsaken dreams.

Alan Squier (Leslie Howard), a wandering intellectual who's lost his desire to live in an increasingly chaotic and neurotic world, stumbles penniless into the Maple service station. He meets the innocent and lovely Gabby Maple (Bette Davis) and is taken by her guileless dreams of going to Paris to study art. She gives him a free meal and gets him a ride with a passing wealthy couple. But all roads lead to this café as they are soon held hostage by the fleeing, murderous gangster Duke Mantee (Humphrey Bogart) and his ruthless gang. Other characters include Gabby's childhood sweetheart Boze - a football playing dumb-jock (Dick Foran) and her crusty old grandfather (Charley Grapewin) with his ancient bloodlusting stories about meeting Billy the Kid.

There is even an interesting subtext dealing with two very different and fairly well developed black characters. One is the wealthy couple's chauffer Joseph (John Alexander) and the other is Slim (Slim Thompson) one of Duke Mantee's henchman. They have an interesting interchange where Slim all but calls Joseph an Uncle Tom. Remember in 1936 this was pretty radical stuff.

Bette Davis is very natural as the wistful Gabby but it is the two male leads that carry the movie. Leslie Howard played intellectual dreamer types better than anyone else and this is, line for line, probably his best role, especially during the movies climax, which I won't give away. Humphrey Bogart made his first real impression on movie audiences with this riveting turn as the Dillingeresque bad-guy, snarling his lines while prowling menacingly around the café like a caged animal.

While there is bittersweet romance between the drifter and the waitress, again it is the tension between the two men that the story revolves around. They represent the two sides of mankind's nature: the search for enlightenment versus the basest of human cruelty.

I remember as a child seeing Carol Burnett do an incredibly funny spoof of this movie on her popular television show. What I didn't learn until much later was just how memorable this classic is. Bogie and Bette and Leslie Howard are brilliant and every single supporting character has an interesting angle. The Petrified Forest is required viewing for any serious movie buff. 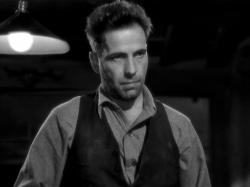 Humphrey Bogart in The Petrified Forest.

Despite Patrick's claims to the contrary, this movie is severely hampered in its transition from stage to screen by the fact that it was so obviously filmed on a set with painted backdrops just outside the windows and doors of the cafe. The painfully awkard dialogue, which no living person would ever say in normal conversation ('Joseph, let us see if their car will function.' is an example), which might have worked in a play or in a novel, doesn't work in movie form either and helps keep this movie from being anything but slightly interesting.

I've never like Leslie Howard and I hate him in this movie. It always so astounded me that Scarlett O'Hara could fall in love with Howard's Ashley Wilkes in Gone With the Wind that it nearly ruined that classic for me. It is only the fact that I'm familiar with the Ashley in the novel that made it possible for me to buy into her love. Here in Petrified Forest it is a little easier to see why Bette Davis's Gabrielle would fall for him, although the fact that it only takes her a matter of minutes to do so is a little dubious. Compared to his competition he's a real stand out, and coupled with his worldliness, it's easy to see his attraction. As soon as he opens his mouth and begins talking though, I was ready to reach into the screen and take Bogie's gun from him and shoot Leslie myself.

There are some things to enjoy about this movie; namely Davis and Bogart. She because anyone who can appear to be so interested and infatuated when listening to Leslie Howard speak as she does in this movie, deserves an Oscar. Bogie is great as the killer. He actually has the least amount of screen time of the three leads and far less dialogue, but he's the stand out here. It's easy to see why this movie launched his career since he commands every scene that he's in. A nice touch by the director is when Bogie sits down in the cafe, the horns of a Buffalo on the wall are lined up perfectly behind him, giving him the appearance of a devil.

As for the climax that Patrick enjoyed, I almost found it humorous. Howard and Davis talking to each other about France as the bullets fly around them made me laugh out loud.

Had this movie been filmed on location without Leslie Howard and with more realistic dialogue, I might have agreed with Patrick's final statement, but as it is I just can't. 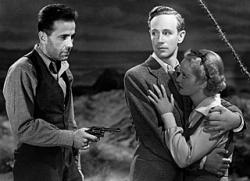 As this was filmed in black and white, the lack of on location filming did not bother me all that much. All that the setting contributes is an isolated locale for the characters to gather. What does it matter how fake the background looks?

I see the point Patrick is making about mankind's nature. The Petrified Forest is filled with opposing views of man's base urges versus intellect. Alan is in search of knowledge while Duke is more like a cave man. Alan will sacrifice for another person while Duke steals from others. Boze represents lust as all he seems to want is to get it on with Gabby. He puts no thought into what she wants or what her goals are. Alan falls for Gabby but sees her potential and chooses to move on knowing he is not as right for her as she thinks. Patrick also mentioned the two African American characters, which was very unique for a 1936 film. They too add to the theme. One is a servant to the wealthy couple whom he asks permission before doing anything. The other is a criminal and is free from such a stereotypical controlling situation.

Amongst all this testosterone is little Bette Davis. I have never found her attractive, but here I will at least call her cute.  She represents all that we classically classify as woman. To her father she is a housekeeper working in the restaurant. To Gramp she is a parent minding how much alcohol he drinks. To Boze she is a prize to be bed and wed. To Alan she is an inspiration and a reflection of his failings.

All of these characters and what they represent in the large scheme of things is a bit fascinating but I agree with Scott that the dialogue drags it all down. Alan at one point says to Gramp, "Any woman's worth everything that any man has to give: anguish, ecstasy, faith, jealousy, love, hatred, life or death. Don't you see that's the whole excuse for our existence? It's what makes the whole thing possible and tolerable." I get that Howard is given some horribly long winded dialogue to represent the artistic, intellectual side of human nature, but no one has ever talked spontaneously as he does here.

In fact, my favorite bit in the entire film is when Howard recites this long piece of dialogue, "Yes, I suppose I am. And not unreasonably. She has heroic stuff in her. She may be one of the immortal women of France. Another Joan of Arc, George Sand, Madame Curie, or Du Barry. I want to show her that I believe in her, and how else can I do it? Living, I'm worth nothing to her. Dead, I can buy her the tallest cathedrals, golden vineyards, and dancing in the streets. One well-directed bullet will accomplish all that, and it'll earn a measure of reflected glory for him that fired it and him that stopped it. This document will be my ticket to immortality. It'll inspire people to say of me, "There was an artist who died before his time." Will you do it, Duke?" and Duke responds, "I'll be glad to." Thank God! Shoot him now Duke. Shoot him now, before he starts to talk again!